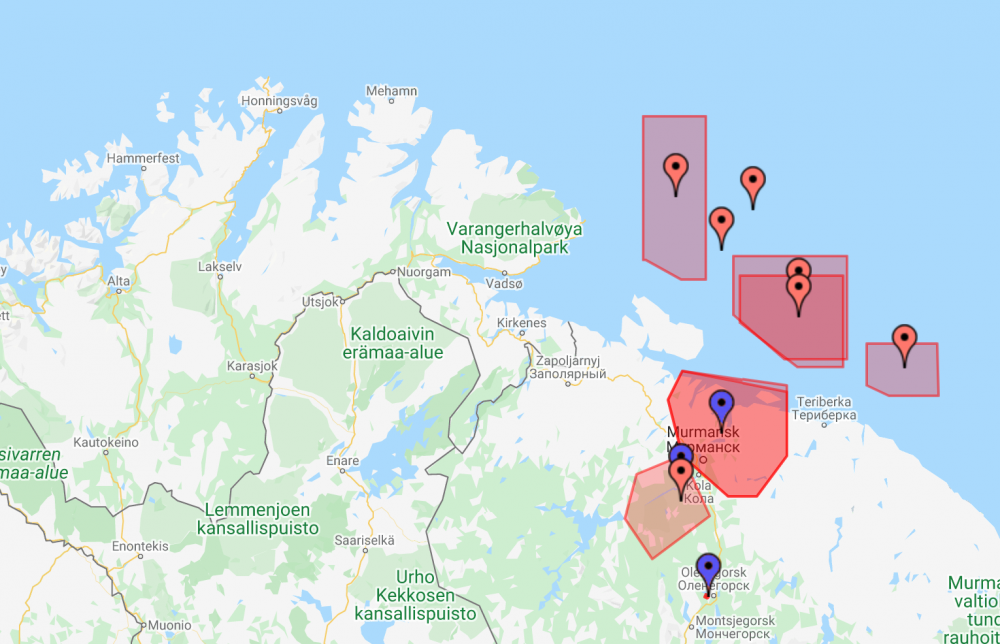 Multiple warnings to Airmen (NOTAM) are issued for the Kola Peninsula and off the coast in the Barents Sea, all way to Russia's maritime border with Norway in the period January 22-27. Screenshot from NotamMap.net

Notice to Airmen (NOTAM) alert warnings show the scoop of actions with naval weapons in the Barents Sea for the coming few days as all four Russian fleets will hold series of exercises involving 140 combat and supply ships.
Read in Russian | Читать по-русски
By

In all, some 10,000 military servicemen will take part in what seems to become a coordinated large navy operation from the Sea of Okhotsk in the Far East, Mediterranean in the south, Atlantic in the west to the Arctic Ocean with the Barents Sea in the north, the Defense Ministry’s TVZvezda reports.

Additional to the warships comes 60 aircraft.

The naval exercises kick-off simultaneously as Belarus and Russia launches the Allied Resolve drills near the western border to Poland and Lithuania, and not too far away from the border to western Ukraine.

Russia has reportedly moved more than 100,000 soldiers deployed near its own border to Ukraine.

The Northern Fleet based on the Kola Peninsula is the largest of Russia’s four fleets, the other being the Pacific Fleet, Black Sea Fleet and the Baltic Fleet.

Last weekend, three of the Northern Fleet’s amphibious assault ships were flexing muscles in the Baltic Sea and made Sweden to increase military readiness, sending more troops to Gotland. The three warships, together with the ships from the Baltic Fleet based in Kaliningrad have now sailed west and are according to TASS on their way towards the Mediterranean where they will meet ships from the Pacific Fleet. The navy group transited the English Channel on January 20 and was followed by a French naval vessel.

The multiple NOTAM warnings for the Barents Sea cover traditional areas north of Murmansk and the Kildin Island where the Northern Fleet use to exercise. One large area, though, is in international waters north of the Fishermen Peninsula and the Varanger fjord where the maritime border between Russia and Norway is.

This exercise area set for January 24-27 overlaps the maritime delimitation border as can be seen on the map at the top of this article. Spokesperson with the Norwegian Joint Headquarters, Lt. Col. Ivar Moen, confirms in a phone interview with the Barents Observer that Russia’s westernmost exercise area stretches into the Norwegian Exclusive Economical Zone (EEZ).

“This is international waters and Russia has its full right to exercise here,” Moen said.

“It doesn’t come as a surprise. Russia has announced that a naval exercise is underway.”

Ivar Moen adds that so far in 2022 Russia’s military activities in the north have been low, as normal is during the Orthodox Christmas and New Year.

The spokesperson, though, said that Norway now will keep an eye on what happens in the days to come. Moen would not elaborate but said monitoring is important for maintaining situation awareness.

In the north, according to Moen, the last year has seen Russian military activity on average for the last 10-15 years. Norwegian F-16 fighter jets, on Quick Reaction Alert (QRA) for NATO out of Bodø air station, were scrambled 34 times and identified 58 Russian aircraft outside Norwegian air space in 2021.

Wargames in this area will take place from Monday to Thursday next week. Additional to waters north of Murmansk, two larger areas along the entire west coast of Novaya Zemlya in the eastern Barents Sea have NOTAM warnings set for next week.

On Thursday, January 20, a pair of Tu-160 strategic bombers flew over the Barents Sea north to areas around Russia’s Arctic archipelago of Franz Josef Land. The flight lasted for 13 hours, according to a short notification by the Defense Ministry in Moscow.

Earlier this week, three of the largest warships in the Northern Fleet, the “Marshal Ustinov”, “Vice-Admiral Kulakov” and “Admiral Kasatonov“ performed a number of joint maneuvers in the Barents Sea, including helicopter operations. The ships are now back at port in Severomorsk, the Northern Fleet’s headquarters north of Murmansk.

The two Foreign Ministers of Russia and the United States, Sergey Lavrov and Antony Blinken are set to meet in Geneva on Friday to decide on next step in security talks amid Ukraine and Europe crises.

NATO has called on Moscow to de-escalate the military build-up along the border to Ukraine. Ahead of the meeting in Geneva, head of the Russian delegation to the Vienna talks on Military Security and Arms Control in Europe, Konstantin Gavrilov, was quoted by state-run news agency TASS that he expects positive results from the Lavrov-Blinken meeting.