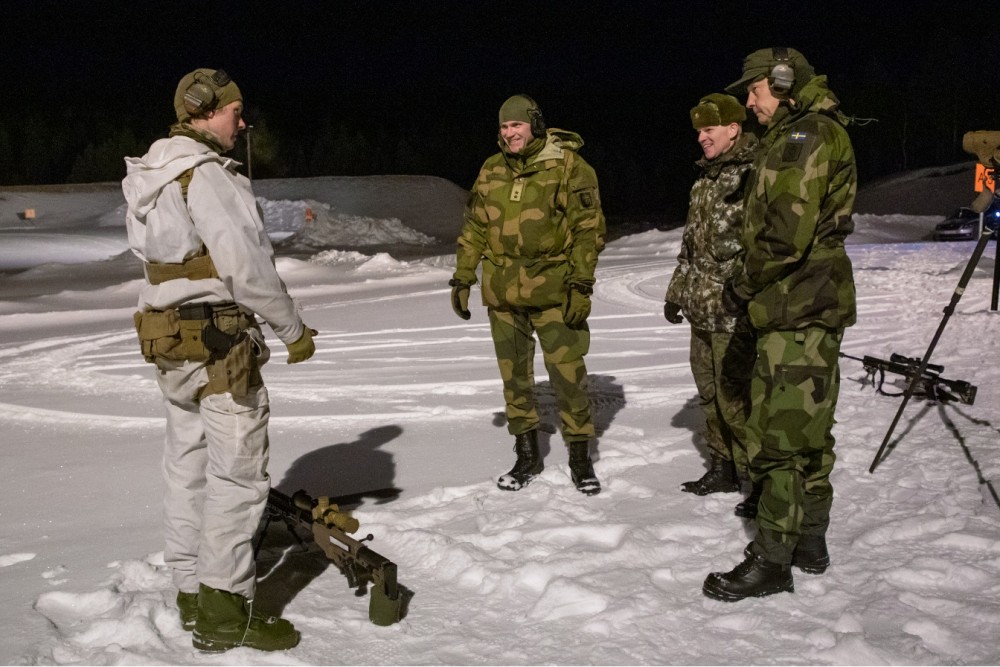 "We are strengthening our capability to do joint operations in peacetime, crisis and war," says Norwegian Major General Lars Lervik.
Read in Russian | Читать по-русски
By

Weeks of harsh Arctic frost were replaced by mild chill as top defence leaders from Norway, Finland and Sweden this week arrived in Porsangermoen, the far northern military base.

The visit of the countries’ Army chiefs comes only few weeks ahead of the Cold Response 2022, the major NATO exercise where Finnish and Swedish troops will participate as part of the Norwegian force.

“We want to continue to strengthen cooperation between the Nordic countries,” says Major General Lars Lervik. He highlights the importance of a joint Nordic understanding of the situation.

“We are going to learn from each other,” the major general underlines in a comment sent to the Barents Observer by email. Lervik is Chief of the Norwegian Army.

The meeting in Porsangmoen comes less than two years after the defence ministers of the three countries assembled in the same far northern base to sign a landmark cooperation agreement. The Statement Of Intent On Enhanced Operational Cooperation outlines a series of measures aimed at strengthening joint operational planning in the North and improving military interoperability.

This week’s meeting is part of the implementation of the agreement from 2020, the Norwegian Armed Forces informs.

As the top army leaders met at Porsangermoen, defence ministry representatives of the three countries signed a contract on the joint acquisition uniforms.

The deal is worth €425 millions and means that soldiers from all the Nordic countries soon will dress up uniforms from the same manufacturers.

“We are talking about new uniforms from the inside to the outside, and I am very happy with the contract,” says Norwegian Minister of Defence Odd Roger Enoksen. “It illustrates the kind of potential that can be found in joint Nordic acquisition of equipment,” he adds.

The first uniforms will be delivered in 2022. They will not look similar, but be based on a joint manufacturing standard, the Norwegian Ministry of Defense informs.

The basis of the increasingly close military cooperation between the Nordic countries is the NORDEFCO,  the defense cooperation established in 2009.

In 2018, the Nordic defence ministers signed the ”Vision 2025”, a political framework that outlines ambitions for Nordic defence cooperation towards 2025. The document states that the Nordic countries are to cooperate not only in peacetimes but also in the event of a crisis or conflict.