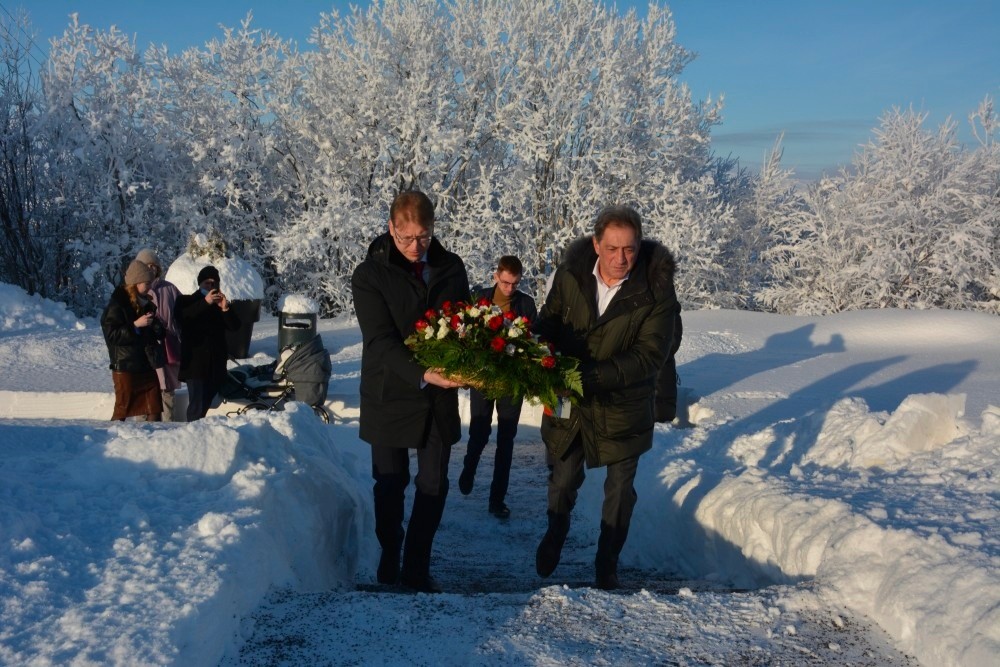 Ambassador Teimuraz Ramishvili (right) and General Consul Nikolai Konygin lay down flowers at the war memorial in Kirkenes in connection with the Day of the Protectors of the Fatherland. Photo: Atle Staalesen

The top diplomat laid down flowers at a local 2WW memorial in praise of Russian war bravery.
Read in Russian | Читать по-русски
By

In a sign of support to the Russian Armed Forces, Ambassador Teimuraz Ramishvili on Wednesday laid down a wreath at the war memorial in Kirkenes, the small Norwegian town located only few kilometres from Russia.

Together with local General Consul Nikolai Konygin, the Ambassador crossed himself and bowed in front of the memorial erected to the memory of Soviet forces that liberated the Norwegian East Finnmark region in 1944.

The ceremony was held in connection with the Day of the Defenders of the Fatherland, the holiday that honours Russian soldiers and war veterans and that is extensively celebrated in the Armed Forces.

It is celebrated in Russia and Belarus and was before 1991 called the Day of the Soviet Army and Fleet. It is rarely marked outside of Russia.

Just few hours after the celebrations, Russian troops launched their large-scale invasion of Ukraine, the biggest violation of international law in Europe since the second world war.

In a comment, Ambassador Ramishvili argues that the Day of the Defenders of the Fatherland first of all is a “father’s day” and “a day off.” At the same time he underpins its military significance.

There were no official Norwegian representatives at the ceremony.

More than 2,000 Soviet soldiers are believed to have lost their lives as the Red Army advanced on Kirkenes in late 1944 and pushed out Nazi forces.

According to Ramishvili, Norwegians should show gratitude to the Red Army.

“I believe Norwegians, and especially people in Kirkenes and in all of Finnmark, are very wise and understand that they are alive because their parents and grandparents were saved by Norwegian partisans and the Red Army,” he underlines.

At the same time, the diplomat makes clear that he is disappointed with Norway’s position to the situation in Ukraine and that the Nordic country should have engaged in peacemaking efforts.

“Clearly not all conflicts are suitable for Norway. The country is busy in Venezuela, Middle East, Mali, Colombia, but for some reason it is not engaged with the neighbouring country.”

“I believe that the Russian-Norwegian relationship has such a long history and is so important for people on both sides of the border that we will overcome also this difficult period.”

According to Professor Kari Aga Myklebost at the University of Tromsø, Norway, it is not common that the Russian Ambassador lays down flowers on this day in Kirkenes. She links the ceremony with Ramishvili’s participation at the ongoing Kirkenes Conference.

“The Russian Embassy in Oslo has previously, last time in 2021, marked the day with laying down a wreath at the monument to Soviet soldiers in Oslo. The fact that the ceremony this year takes place at the Liberation Monument in Kirkenes is probably linked with Ambassador Ramishvili’s presence in Kirkenes in connection with the Kirkenes Conference,” she says in a comment to the Barents Observer.

The Day of the Defenders of the Fatherland was extensively celebrated across Russia. In Severomorsk, the headquarter city of the Russian Northern Fleet, Commander Aleksandr Moiseev in an address greeted in troops and underlined that the celebration is devoted to “everyone that devotes their life to military service [and] bravely and unselfishly executes military obligations in protection of the nation’s interest on all borders.”

He also highlighted that “it is a pleasure to note that on this Day a significant force is resolving set tasks far away from domestic coasts.”