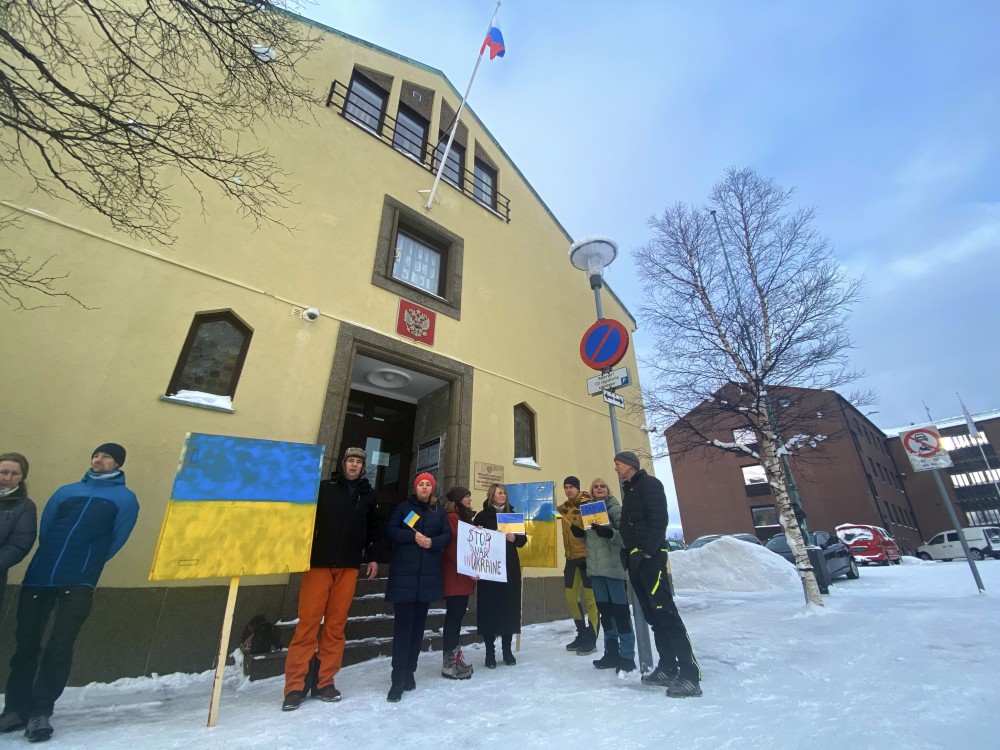 "Putin to The Hague" - The message was clear on the doorsteps to Russia's Consulate General in the Norwegian border town.
Read in Russian | Читать по-русски
By

People in Kirkenes, a 15 minutes drive from the border to Russia’s Murmansk region, are shaken by news coming from the war zones in Ukraine. The small town has a mixed population, mainly Norwegians, but also many with Russian and Ukrainian background.

The messages were clear: “Stop War” - ”Putin to Haag” and “Putin, Hands off Ukraine.”

“We are here to support Ukraine,” says Natalia.

“It’s a shame what happens. I just have to tell my grandchildren that I have protested.”

Natalia says that most of her friends in Russia support Ukraine, but they are afraid to publicly protest.

“I can understand, yesterday nearly 2,000 protesters were arrested. Really strong people,” she says.

Natalia’s homemade poster has a short message: “Putin to The Hague” - the Netherland city home to the UN’s International Court of Justice.

“I think he is mad. But, he can’t avoid facing court,” she makes clear.

While Natalia is originally from Russia, her friend Inna is from Ukraine.

“It is absolutely awful, I talk on the phone with friends and family yesterday, at night and in the morning. They are in the northeast region where fighting takes place. Bombs are not only hitting military targets but also civilian water supply and heating systems, so they are there in cold apartments without water,” Inna tells.

“Putin, please stop the war,” is the message Inna wants to bring to the Russian Consulate General in Kirkenes. During the protest, however, none of the diplomates opened the door.

“We have just proposed to raise the Ukrainian flag outside the Town Hall to show support,” says Gabrielsen, who formerly has been Mayor of the municipality.

Kirkenes Town Hall is next to Russia’s Consulate General.

“The fact that Putin has started a war against Ukraine puts a kind of another frame to the cooperation and the friendship agreements we have. We have to evaluate and clearly state our opinions,” Pål Gabrielsen says.

“Our message to Putin is clear. Withdraw the troops, the ongoing war is dangerous for the entire world,” he says.

The Russian Consulate General in Kirkenes has not made any public statements.

In Moscow, President Vladimir Putin on Friday afternoon said on national TV that Ukrainian President Volodymyr Zelensky’s government is a “band of drug addicts and neo-Nazis that had lodged itself in Kyiv and taken hostage the entire Ukrainian people.”

In Oslo, Foreign Minister Anniken Huitfeldt called in Russian Ambassador Teimuraz Ramishvili on the carpet with a clear message to stop the unprovoked attack on Ukraine’s sovereignty.

“Norway condemns Russia’s military attack on Ukraine in the strongest possible terms. This attack is a serious violation of international law and will have dramatic consequences for the people of Ukraine,” Støre wrote on Twitter.