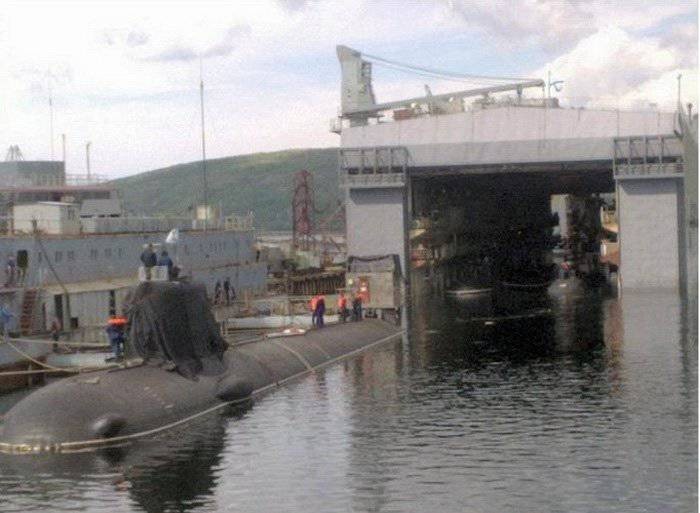 GUGI's deep-diving mini-submarines are based in Olenya Bay. The floating dock serves as a cover.

The town that houses Russia's most secret submarines has a dire need for upgrade of its local housing and social infrastructure.
Read in Russian | Читать по-русски
By

Along the berths of Olenya Guba lie special purpose sub Losharik, intelligence ship Yantar, and several more of the most secretive spy vessels of the Russian Navy.

From this base, located about 30 km north of Murmansk City, nuclear-powered submarines and surface vessels regularly sail out on special missions. Several of them are believed to involve operations near underwater infrastructure in Norway and other NATO countries.

Satellite images show that the military base over the past years has undergone big modernisation of its local military infrastructure, including weapon storage facilities and the seaport.

But despite its key strategic importance for the Russian Armed Forces, the small town with a population of about 1,500 has a dramatically dilapidated healthcare system, social infrastructure and housing.

At least 45 percent of the social infrastructure is believed to be in dire need of upgrade and renovation.

During a visit to the town this weekend, the governor underlined its significance, saying that it houses “people that are engaged in very important tasks.”

“The town has given us 19 Heroes of the Soviet Union and the Russian Federation,” Chibis says in a comment.

They deserve better conditions of living, he makes clear.

This weekend’s trip of the governor also included visits to the towns of Polyarny, Gadzhievo and Snezhnegorsk. Local healthcare and the housing situation was on top of agenda.

“I call on all colleagues, ministers and vice-ministers to pay special attention to the situation in our closed military towns,” Chibis says.

The Murmansk governor has made “living in the North” (Na Severe Zhit’) his main slogan and urban development a top priority. That includes also the many closed military towns of the region.

Chibis was not content with what he saw during his visit to the naval towns, and now warns town managers that the regional government will step up inspections. That includes visits without prior notice, he underlines.

In the Kola Peninsula, there are 23 towns and settlements with military bases, and they house more than 152 thousand people, or about 20 percent of the region’s population.

In a recent report delivered to the federal Arctic Commission, Governor Chibis explained that the level of dilapidation of local housing, energy systems and social infrastructure in the closed military towns varies from 45-100 percent. The same applies for local roads, the regional government informs.

In late year 2020, the Arctic Commission approved a renovation plan for the towns, according to which 26 measures are to be taken in seven garrison towns in the region in the years 2022-2023.

Among the towns included in the program is Sputnik, the base for the 61st Naval Infantry Brigade, also called the Kirkenes Brigade.