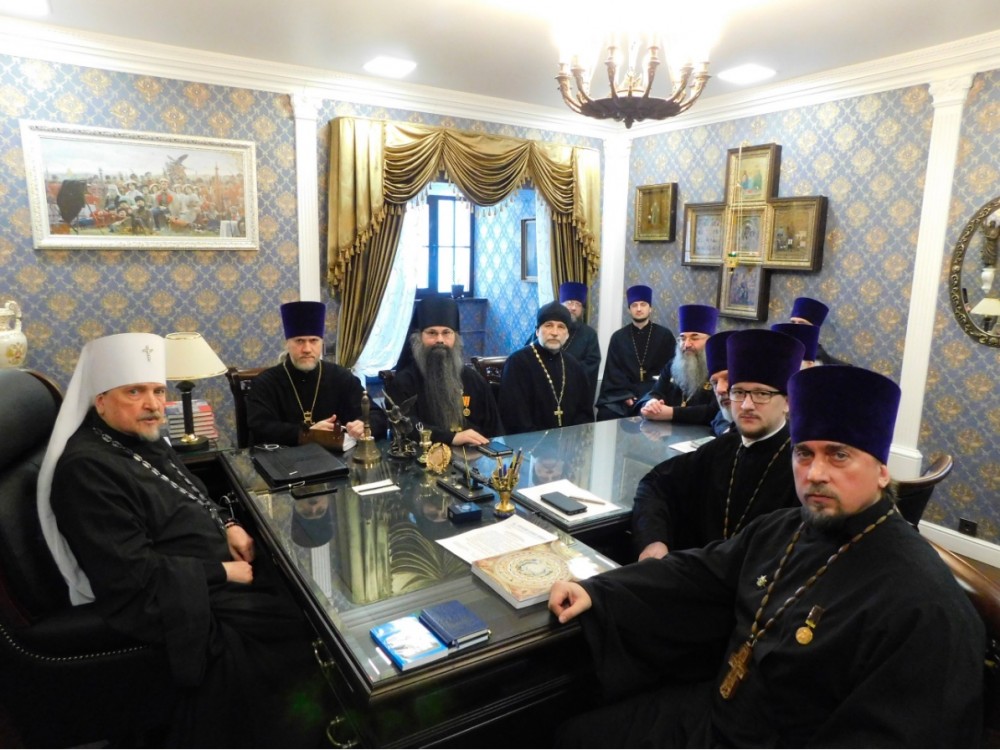 The church leader from the militarised Russian region calls on his parish to pray for the successful accomplishment of the "sacred" mission.
Read in Russian | Читать по-русски
By

“It is a war,” Metropolitan Mitrofan of Murmansk underlined in a sermon in early March. He did not mind calling it only a “special military operation”, as ordered by Russian authorities.

For Mitrofan, this is a war, not only for Putin’s imperial Russia, but also for Russian Orthodoxy.

“Today, the very question of Orthodoxy is being decided,” the prelate said in the the sermon. For the metropolitan and many of his colleagues, the attack on Ukraine is to help remove the divisions within the east Orthodox Church that emerged following the breakup of the Soviet Union

“If we succeed to reunite, to remove the darkness that has embraced our neighbouring brotherly [Ukrainian] people, to remove fascism, then the Church will breath with a full breath and there will be no more divided soul,” he told his congregation.

Mitrofan speaks to his parish on the 23rd of March.

Since 1991, the Ukrainian Orthodox Church has gradually taken over control over churches and parishes in Ukraine. Meanwhile, the Moscow Patriarchy has lost ground and today serves a dwindling number of parishes.

“Orthodoxy is the only force of God left on earth, our Lord has no-one left but the Russian Orthodox Church,” Mitrofan underlined in a sermon on the 23rd of March and described the Ukrainian Patriarchy as “not a real church” and as “razkolniki” (dissidents).

Metropolitan Mitrofan is the highest ranked clergy man in the Kola Peninsula and a powerful prelate in Russian Orthodox church hierarchy. Before he entered a theological institute in 1999, he had worked for two decades in the Northern Fleet. He served as captain of several major naval vessels and even graduated from the Kuznetsov Naval Academy in St. Petersburg.

He is well known as a hardliner and close associate of Patriarch Kirill. Since 2018, he has headed the Church Commission on Physical Education and Sports.

For Mitrofan, the war against Ukraine is fully legitimate and even a necessity.

On the 23rd of March, the metropolitan with increasing desperation lashed out against the neighbouring nation, that he describes as “a people that has lost its heart to the Prince of Darkness.”

According to Mitrofan, it all started in 2014, when Ukrainians were “jumping around like monkeys at [central square] Maidan.”

“Normal people simply do not behave this way, it is not human. Chimpanzees love to jump around, but not people. It was bitter to observe, and it was orchestrated by devils. It was simply shameful, like it can be shameful to see a relative behave badly. It was sinful.”

The Russians have a big job to do, the metropolitan argues.

“We now see how hard it will be to heal the country, how hard it will be de-nazificate the country, remove the infection, the fascism that now holds everyone in fear as hostages, and nobody dares to open their mouth for fear, because they will all be killed, tortured, and people are disappearing, mass graves are discovered by our advancing forces.”

According to Mitrofan, “this kind of atrocities were not even seen in Germany during the fascists.”

The mission will be accomplished and the Ukrainians succumb, he underlines. It is a Russian sacred mission, he argues.

“Again the Russian people is coming to help, again we do what is needed, and our men are dying. But the mission will be accomplished because if not, it will be the end of everything, and the Dark Prince will reign.”

All Russians must now pay for military victory in Ukraine, the church leaders underlines.

“It is our destiny to taken on arms and fight. Strengthen us, Our Father. Do not relax, dear brothers and sisters, do not forget to pray for the accomplishment of the super-important mission.”

According to reports, a major number of churches have been put to ashes by attacking forces. That includes churches in Kharkiv, Svyatogorsk and the village of Zavorochi.