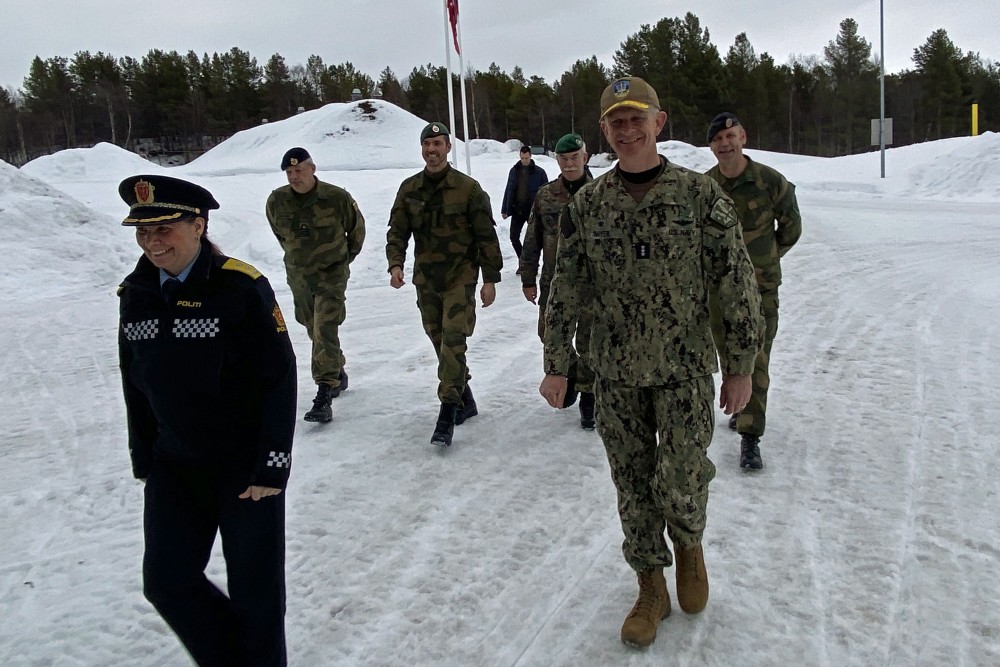 NATO’s two top operational-level commanders, General Jörg Vollmer and Vice-Admiral Daniel Dwyer, express high satisfaction with how Norway handles the challenges of sharing border to one of the most militarized regions of Russia.
Read in Russian | Читать по-русски
By

General Vollmer and Vice-Admiral Dwyer spent Sunday driving snowmobiles along Norway’s border to Russia. Guided by soldiers from the Garrison of Sør-Varanger (GSV) the military commanders got a unique insight into NATO’s northernmost land territory of responsibility.

Snow-covered nature, beauty, and silence of the Pasvik valley’s taiga forest. Who could think that only a few kilometers to the east are home to brigades that have hundreds of soldiers fighting in Putin’s horrific war against the Ukrainian people?

The bombings of the last four weeks have been the most brutal bloodshed in Europe since Second World War.

While the Russian president claims one of his objectives is to keep NATO at distance, the 200 kilometers long border to the North Atlantic Alliance in the Pasvik valley proves to be the country’s most peaceful of them all. Moscow has during history been at war with all of its European neighbors, except Norway.

Norway is one of the twelve founding members of NATO. Today, the alliance counts 30 members and two more, Finland and Sweden, are knocking on the door.

All since 1949, Norway has balanced its security relations with the much larger neighbor to the east on deterrence and reassurance. No nuclear weapons on Norwegian soil, no foreign military bases and strict limitations on other NATO countries’ possibilities to exercise in the eastern part of Finnmark region.

Norway’s deterrence is solidly based in NATO, nowadays highly visible as exercise Cold Response 2022 takes place. The Norwegian-led Arctic military drill, however, has its main theater some 5-600 kilometers away from the Russian border. For Moscow, low tensions in the vicinity of the strategically important Kola Peninsula help avoid misunderstandings.

Russia’s fleet of ballistic missile submarines, armed with nuclear warheads that can reach North American territories, are based in Gadziyevo on the coast to the Barents Sea, some 100 kilometers from the border to Norway.

Chief of the Norwegian Joint Headquarters, Lieutenant General Yngve Odlo, explains why it is important for him to bring the two top NATO commanders to Pasvik.

“The main reason we are here is to see how Norway handles the relationship with Russia as a border nation. The military, the police and the state,” he says. “Relations are different from nation to nation and it is important for the NATO commanders to have an understanding of the Norwegian approach.”

Together with the Baltic States, and Poland which neighbors Kaliningrad, is Norway the only NATO member with a direct border to Russia.

“Solutions here are definitely different than in other areas of our responsibility,” Vollmer says to the Barents Observer.

“This is the most northern land territory of NATO. Therefore it is so important really to understand what are the challenges. Coming here gives you a better sense, talking to the soldiers, it is always about history and this gives you a much better flavor and understanding.”

Jörg Vollmer is responsible for the security of the Alliance in Northern Europe.

“The way Norway did it is a good example for other areas as well. The specifics in this region, the territorial waters, it is necessary always to have the ability to talk with each other,” Vollmer says underlining the importance of the direct line between the Norwegian Joint Headquarters near Bodø and Russia’s Northern Fleet in Severomorsk.

“To have this famous red phone if an incident occurs, to speak with each other and to avoid any miscalculations which could end in something worse.”

Ahead of Cold Response 2022, Lieutenant General Odlo was online with the powerful Northern Fleet Commander Admiral Aleksandr Moiseev and informed about the objectives of the Norwegian-led NATO exercise.

For NATO, which has deployed big forces on standby in eastern Europe as Russia attacked Ukraine, the long-time planned Arctic military drill has not been scaled down.

“The fact that we can have a large exercise such as Cold Response going on with the events that are happening in Ukraine just shows the capability, the resiliency of NATO,” says Vice-Admiral Daniel Dwyer, Commander Second fleet and Joint Force Command Norfolk.

“Cold Response shows the flexibility, determination and readiness that NATO has. It is just incredibly impressive,” the Vice-Admiral notes.

From Florida to Finnmark

He tells that outside his headquarters stands a sign. It says “JFC Norfolk: Multi-domain command, from seabed to space, from Florida to Finnmark.”

“It’s a great opportunity to be in Finnmark. To see the professional soldiers here. I’m incredibly impressed and also thankful to have such a capable, professional military, evidenced by the soldiers at the outpost here,” he says.

There have likely never been so many stars on high-ranking uniforms at the small, remote border guards’ station in the Pasvik valley before. NATO has neither had two out of three operational-level commanders so close to Russia’s northern border before.

The high-ranking NATO military officials agree that the security architecture of Europe is fundamentally changed after Putin on February 24 launched a massive war on Ukraine. How it will impact the north and Norway’s balance between deterrence and reassurance, however, is still unclear.

“Nobody has the answer yet,” Odlo says.

“When you have a big nation like Russia who has the ability and capability, but also the will to grab another sovereign state, invade, of course, that will rearrange the whole security. We need to take other precautionary measures,” the Commander of Norway’s Joint headquarters states.

“Our job is to defend our people. We now see that war is a possible outcome. But how security measures will be rearranged, I don’t know,” Lieutenant General Yngve Odlo says.

Katarzyna Zysk, a professor of international relations at the Norwegian Institute for Defence Studies, is expert on Russia’s military strategy under Putin. She says to the Barents Observer it is difficult to yet answer on what indirect impact Russia’s war will bring for Norway’s high north security. But, as Zysk puts it: “I have a hard time seeing going back to business as usual on reassurance.”

“It has provoked a tectonic shift in European security with shock waves to the broader international system. The results of the Russian aggression will likely be felt over next few generations. The very foundations of Russia policies will have to be re-evaluated, including what reassurance and deterrence policies work and which have failed,” the professor explains.

Zysk says Norway and NATO’s policies toward Russia have shared a similar feature: a two-track approach combining cooperation on the one hand, with credible defence and deterrence on the other.

“The point of gravity has been moving toward the latter as Russian foreign policies have grown more assertive and aggressive over the past decade.”

She thinks it will be impossible to avoid ripple effects from the ongoing war in Ukraine.

“We have seen almost an immediate impact of the war in the High North on the governance regimes such as the cooperation in the Arctic Council and Barents Euro-Arctic Cooperation. It was a necessary reaction as «business as usual» would have given Russia an international legitimacy it should be denied when its armed forces pursue an unprovoked full-scale military aggression against another state,” professor Zysk elaborates.

“Whether it will be possible to limit the damaging spillovers from the Russian war, is an open question.”

Meanwhile, the winds of change, both politically and military, are blowing strong.

“For now, the situation is highly unpredictable and volatile, and a pause is needed to get a better comprehension of the impact and adequate responses,” Katarzyna Zysk says.

Last Friday, the Norway announced it would add an extra 3 billion kroner (€308 million) to this year’s defense budget. Much of the extra funding will go to military capabilities in the north.

Also Sweden said it would boost defense spendings by about 3 billion kroner with the aim to speed up rearmament. Norway, Sweden and Finland have a close military cooperation with a stated common security understanding of developments up north.