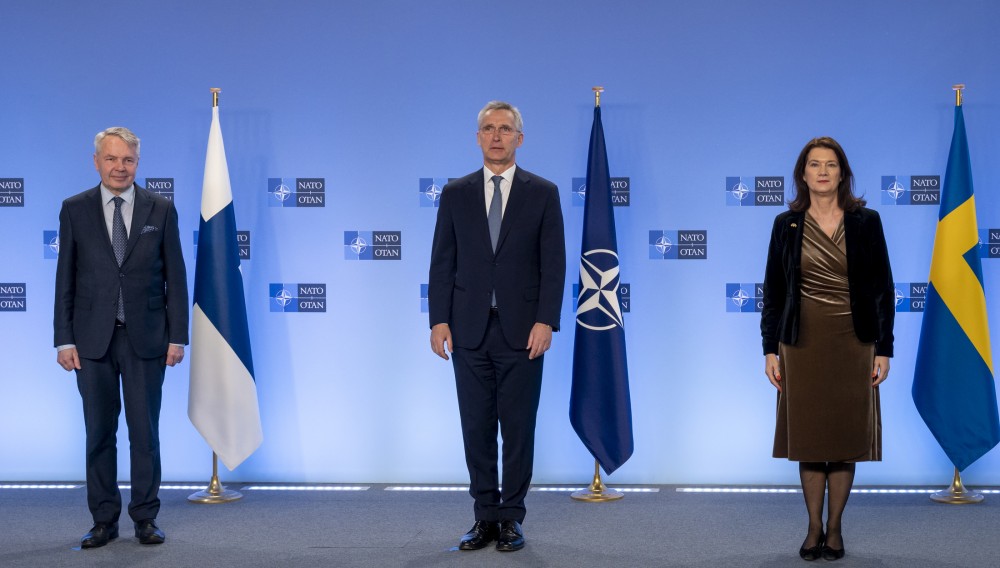 A possible NATO membership for Finland and Sweden would be the biggest redrawing of the military map in northernmost Europe since the breakup of the Soviet Union.
Read in Russian | Читать по-русски
By

No countries are closer linked to NATO’s security umbrella than Finland and Sweden. Joint exercises, shared intelligence and common political values. But the two Nordic countries are left without the security guarantees that follow Article 5 of the NATO Treaty on collective protection; all for one, one for all.

This week, as an example, Finland and Sweden have fully participated with fighter jets in exercise Ramstein Alloy in the skies over Estonia. The drills included air combat training, air-to-air refueling, and air-policing along the Baltic nation’s eastern border with Russia. In case of war, however, Estonia, unlike Finland and Sweden, will be backed military by NATO.

Russia is now the pushing factor behind what until this winter wasn’t a question on the European security drawing table.

“Everything changed with Russia invaded Ukraine,” Finnish Prime Minister Sanna Marin said when meeting reporters together with her Swedish counterpart, Magdalena Andersson, in Stockholm on Wednesday.

The two spent the day discussing how to strengthen the security of the two countries following the fundamental changes in Europe after Russia’s unprovoked attack on Ukraine.

On Wednesday, Marin’s Government submitted a report to Parliament on how Finland can strengthen its national defence capability and develop military cooperation with partners, the closest of which is Sweden. The report also assesses the effects of a possible move from being a partner nation to becoming a NATO member.

“Security guarantees do not apply to NATO partner nations, only members,” says Per Erik Solli, a senior defence analyst with the Norwegian Institute of International Affairs (NUPI).

Solli says to the Barents Observer that Sweden and Finland both are vulnerable today if Russia stages a geographically limited attack similar to the invasion of Ukraine.

“If Finland and Sweden join NATO the risk of attack will decrease and deterrence will be cohesive for the Nordic region,” Solli says.

He underlines that such a move will not only be of importance for the two new members, but also for NATO as such.

“NATO’s northern flank would be more robust if Finland and Sweden become members of the alliance.”

Per Erik Solli notes that Moscow should not fear a united Nordic region in NATO.

“If Finland and Sweden join the alliance there will be no offensive threats or risks to Russia. In the last decade, NATO has evolved back to the core mission of collective defense.”

Former Chief of Finnish Defence Intelligence, now ministerial adviser, Harri Ohra-aho, explains in a tweet that Finland’s direct border with Russia does not in itself increase the risk.

“What matters is what are Russia’s strategic objects beyond the border,” he argues and points to the fact that there are no strategically important sites between the Kola Peninsula and St. Petersburg, except for a couple of military bases.

With Norway being a founding member of the alliance in 1949, the country’s 198 km long land border to the heavily militarized Kola Peninsula has also been NATO’s direct border to some of Russia’s most strategically important conventional and nuclear assets. At the same time, the northern land border has also maintained a low-tension assurance between East and West, in sharp contrast to Russia’s other European border regions.

“We will continue to consult closely,” Ann Linde said after the meeting.

What now happens in Stockholm and Helsinki is a big historical shift for the two countries which have been militarily nonaligned since the end of the Second World War.

In a commentary for the security think tank RUSI, Per Erik Solli and Øystein Solvang explain how the war in Ukraine has profound implications for Nordic security cooperation.

Although the military integration by Finland and Sweden with NATO members Norway, Denmark, and Iceland has evolved gradually over the last three decades, the absence of formal security guarantees creates strategic ambiguity, the two researchers point out.

“This undermines the deterrence effect and the preventive value of this collective defence capability,” Solli and Solvang argue.

“Should Finland decide to join NATO while Sweden stays out, the Swedes could easily find themselves in the same isolated position as Ukraine, should the country fall victim to limited Russian aggression,” write the two NUPI researchers Per Erik Solli and Øystein Solvang.

“Only if Finland and Sweden decide to join NATO would the entire Nordic region become part of a comprehensive and robust deterrence scheme to prevent conflict in the High North.”

In 2020, the defense ministers of Norway, Finland and Sweden met at the far northern military base of Posangermoen and signed an agreement to bolster Nordic security cooperation.

The Nordic power could soon be much stronger than any of the ministers had in mind two years ago.

While Russia largely has itself to thank for getting two more Nordic countries as NATO members, Moscow has this week actively voiced concerns.

Dmitry Medvedev, nowadays deputy chairman of Russia’s Security Council, said such possible NATO membership would be answered with Russia deploying more of its land, naval and air forces in the Baltic Sea region.

“There can be no more talk of any nuclear-free status for the Baltic, the balance must be restored,” Medvedev said according to Reuters.