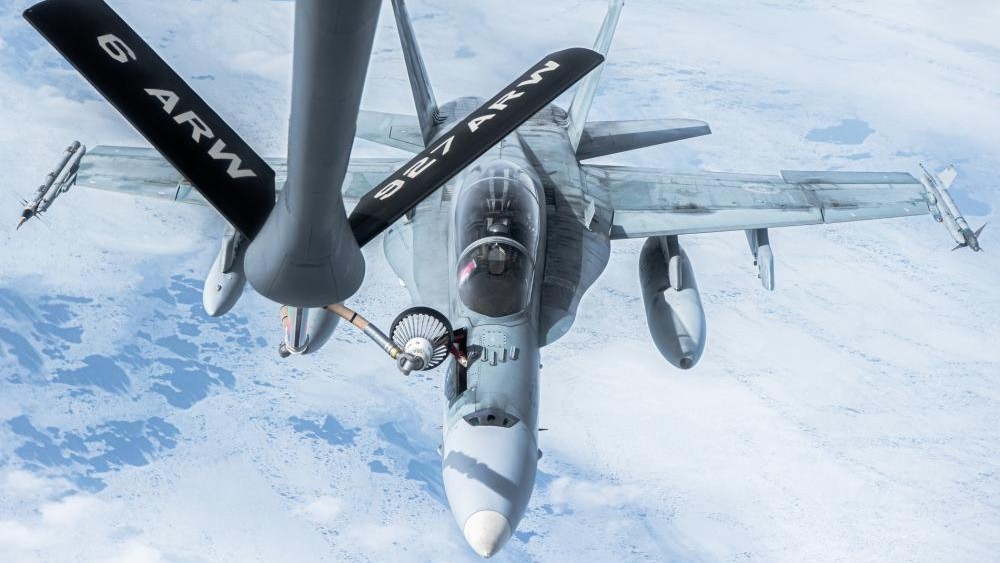 A U.S. KC-135 Stratotanker aircraft refuels a Canadian CF-18 Hornet aircraft during Operation Noble Defender in the North American Arctic in 2022. A KC-135 Stratotanker flew the length of Finland, including over southern Lapland, this week after Finland announced its intention to join NATO. Photo: Airman 1st Class Joshua Hastings

Defence officials were tight-lipped about the symbolic visit of the planes in Finnish airspace, which came as US troops joined exercises in southeast Finland.
Read in Russian | Читать по-русски
By

A day after Finnish leaders announced plans to seek Nato membership, a United States KC-135 Stratotanker flew the length of the country with the intention of refuelling four US military planes in Finnish airspace.

The refuelling plane set off from RAF Mildenhall airbase in southeast England and flew along the Norwegian coast before heading east toward Finnish Lapland.

Around 1 pm, the refuelling plane was flying slowly over southern Lapland at an altitude of about 6,000 metres. The plane eventually left Finnish airspace, heading south toward Estonia, a Nato member since 2004.

The Finnish Defence Forces were tight-lipped about the symbolic visit of the planes in Finnish airspace. It granted a permit for overflight by the planes, which were not to land in Finland.

According to the US Air Force, A10 attack aircraft are designed to provide close support to ground forces against various targets such as tanks. These planes did not show up on the aviation tracking site Flightradar.

Also on Friday, about 20 US soldiers began participating in exercises with the Utti Jaeger Regiment in southeastern Finland.

The bilateral Finnish-American exercise is to run until 5 June. It’s aimed at boosting the ability of Finnish special forces to work with international partners.

The US troops are taking part in training activities in Kouvola and elsewhere in southern Finland.

The Army Chief of Staff, Lt Col. Janne Sallila, said that the exercise has been long planned and is not linked to Finland’s possible accession to Nato.

Meanwhile about 20 soldiers from the Utti Jaeger Regiment were participating in a US-led multinational special forces exercise in Lithuania that ended on Friday.