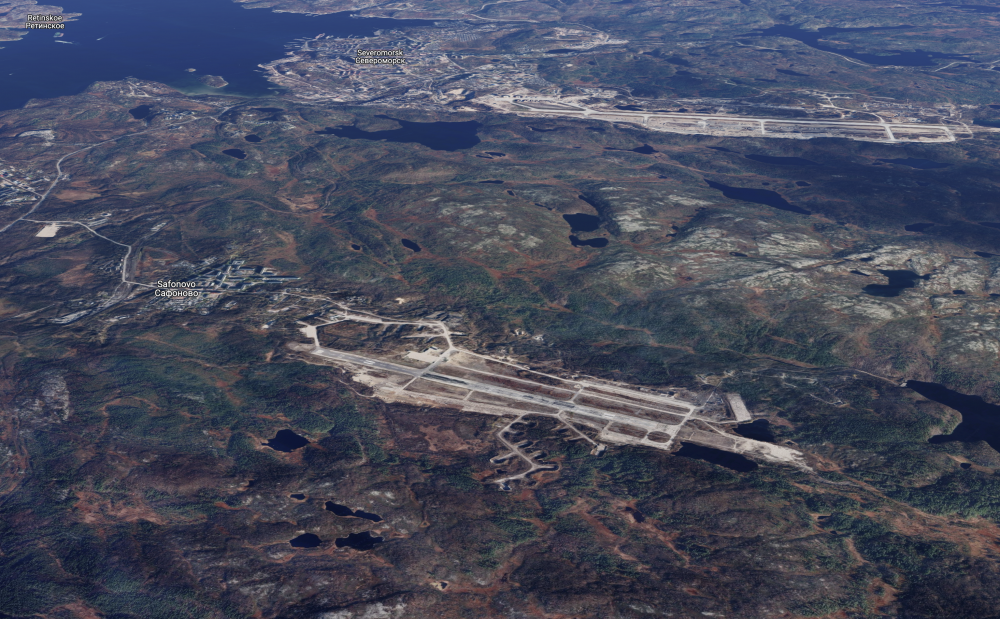 The abandoned Severomorsk-2 air stip is located some five km south of the Northern Fleet&#039;s Severomorsk-1 air base on the Kola Peninsula. Satellite photo by Google Earth

Abandoned military airport on Kola will be reconstructed

As part of a major upgrade of Northern Fleet airstrips in the European Arctic, the Severomorsk-2 that was shut down in 1998 will now be reconstructed and reopened.
Read in Russian | Читать по-русски
By

Comprehensive investments are needed. After being abandoned 25 years ago, most of the airfield facilities and gear on taxiways were looted. The 1,800-meter runway is still intact, but in bad shape with severe cracks even visible from satellite images like the Google Earth.

In recent years, the runway has been used for smaller UAVs operated by Russia’s Northern Fleet whose Headquarters is located in the city of Severomorsk, seven kilometers to the northeast of the former air base.

Severomorsk-2 is 11 kilometers northeast of Murmansk.

It is Northern Fleet Commander, Admiral Aleksandr Moiseev, that included Severomorsk-2 among Russian Arctic military airfields to be reconstructed and new-built by 2030.

The former seaplane facility at Safonovo, south of Severomorsk in the Kola Bay, will also be re-established, the Admiral informed.

No details were provided on which aircraft could possibly be based at the reconstructed Severomorsk-2. Upgrade of the airstrip could be a preparation for more advanced UAVs that Russia has said will play an important role in future military plans.

Today, the Northern Fleet has two major air bases on the Kola Peninsula, the Severomorsk-1 and Severomorsk-3.

Located on the outskirts of Severomorsk city, the Severomorsk-1 air base has a 3,500-meter-long runway and is home to maritime surveillance aircraft (Il-38), and anti-submarine helicopters (Ka-27).

The Severomorsk-3 is the air base for the Northern Fleet’s fighter jets and is located 28 kilometers east of Murmansk.

There are two other military air bases on the Kola Peninsula as well, the Olenya near Olenogorsk which is home to long-range Tu-22 bombers and the Monchegorsk with fighter jets.