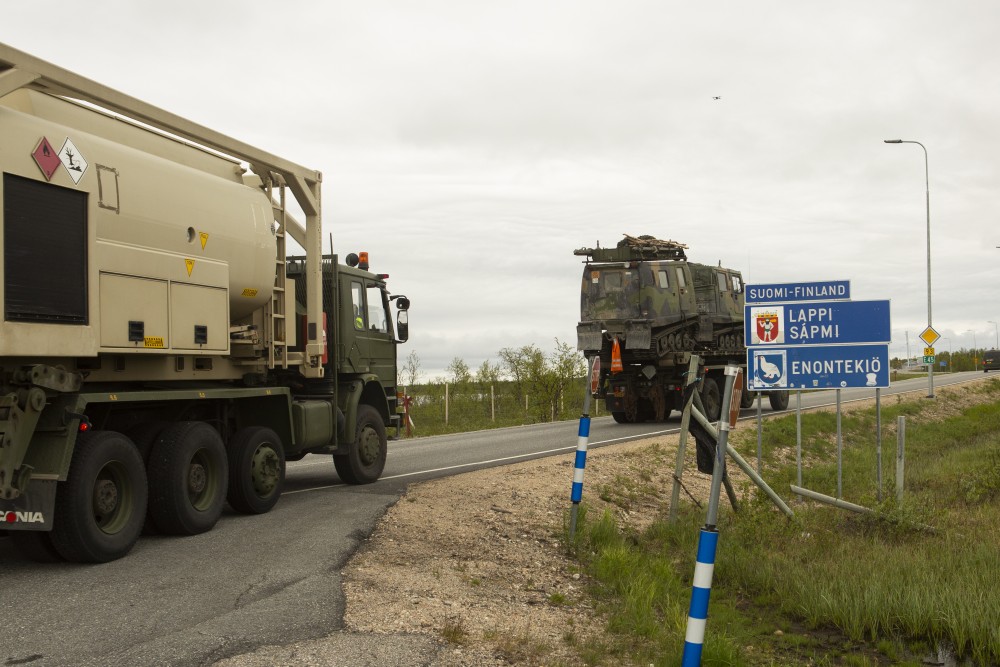 The transport route via Finnish Lapland took place only hours after the Norwegian Parliament approved a welcome of Finland and Sweden to join NATO.
Read in Russian | Читать по-русски
By

Traditionally, Norwegian military vehicles sent for exercises in the northernmost region of Finnmark follow European highway E6 from and return to the large garrison at Setermoen and Bardufoss south of Tromsø.

That road, circling narrow fjords and over mountains, is vulnerable and easy to block. Like earlier this spring when a bridge collapsed over a flooded river in Kvænangen. Traffic was halted for almost a week.

On Thursday, a column of military vehicles en route home from the live-fire exercise Thunder Bolt tested a new route, not obvious to take advantage of previously; the road via Finland’s northwestern arm.

“This was a successful test of a new route to move military equipment in the north,” says spokesperson with the Norwegian Army, Rolf Ytterstad, to the Barents Observer.

The border crossing had a double symbolic message as it happened the same days as Stortinget, the Norwegian Parliament, voted overwhelmingly in support of Sweden and Finland to join NATO.

“Transit from Finnmark to the camps in Troms via Finland shows that we have more options on transporting military means,” Ytterstad says and tells that both border-crossing procedures and the new road axis between Kautokeino, Kilpisjärvi, and Skibotn were tested.

The column was guarded by Finnish military police from the Jaeger Brigade along the road towards the border to Norway at Kilpisjärvi, a distance of just over 200 kilometers.

With Sweden and Finland joining NATO, the security landscape and military planners’ possibilities to chose different options when moving troops, vehicles and weapons in northernmost Europe will be way more diverse than with Norway as the only NATO-country inside the Arctic Circle in border areas to Russia.

Norwegian prime minister, Jonas Gahr Støre, said in a statement on Thursday that both Finland and Sweden fulfill all the criteria to become members of NATO. He added that Swedish and Finnish NATO membership will enhance the guarantee of collective defense and strengthen security in the North Atlantic area.

“We will further develop our Nordic defense cooperation. Our military forces work well together and have trained together for years. We greatly appreciate the significant contributions that Finland and Sweden have already provided as partners of NATO,” Støre said.

The U.S attack submarine in Russian Navy base Gadzhievo has been repainted to a Russian sub carrying a "Z"

Abandoned military airport on Kola will be reconstructed