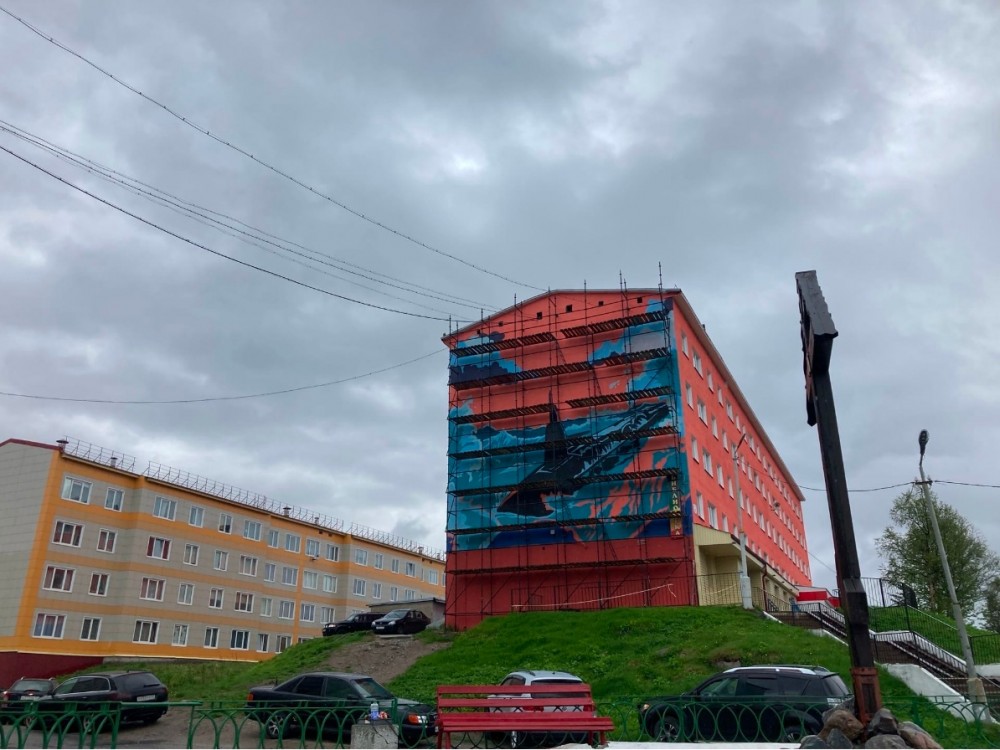 The new mural in Gadzhievo depicts a U.S attack submarine, most likely of the Los Angeles-Class, alternatively of the Ohio-Class. Photo: vk.com/murmansk.region

Local authorities wanted to give downtown Gadzhievo a much-needed facelift, but the painting of an American attack submarine on a local house wall soon sparked outrage.
Read in Russian | Читать по-русски
By

“Look, what a beauty,” representatives of the town proudly write in a social media post about the mural.

The house located in the center of the small town now depicts a submarine in surface position surrounded by stormy waves. It is made in an artistic way by a professional muralist.

The painting was completed in early June.

The only problem is that it is not a Russian submarine.

The mural soon attracted massive attention from locals, many of whom have spent years at sea for the Northern Fleet.

The house wall in Gadzhievo shows a U.S submarine, apparently of the Los Angeles-Class. The American nuclear-powered fast attack underwater vessel can carry numerous torpedoes, Tomahawks and Harpoon missiles, and is a frequent visitor in the Barents Sea where it hunts Russian submarines.

Many of the latter have Gadzhievo as their home base.

A storm of reader comments now rages on local social media. On the town VK page, a local underlines that someone must carry the responsibility for the action.

“How disgusting! Why paint an enemy vessel?!” the comment reads. And the person adds that “we have our own submarines, and they are by far more beautiful than the ones of our foe.”

“Shame on the town administration!” another reader writes.

Meanwhile, town authorities argue that the painting was chosen after a vote where locals were invited to participate. The sub got the most votes, the administration says.

Nonetheless, consequences for the local town officials could soon be detrimental.

On another local VK page, several people call on the FSB to get engaged. “I suggest that representatives of the Prosecutor’s Office and the FSB deal with this issue before this shameful act is seen by the whole country,” a person operating under the name “Polar Wolf” writes.

Another person calls on the artist and local authorities to be charged under the new laws on “discrediting the Russian Armed Forces.” The laws were adopted following the recent onslaught on Ukraine and have led to large fines and arrests of anti-war activists.

The mural in Gazhievo is unlikely to have a long life.

In a comment, a man calls the painting “mockery of the soul of every submariner.”

“This submarine is not only foreign, it belongs to the enemy. It has been the main opponent of our submarine forces over the last 30 years,” he writes. “With what kind of feelings will our submariners parade the local streets next to this picture?” he asks.

Gadzhievo is one of Russia’s most potent Navy bases. It houses the lion’s share of the country’s new strategic Borei-class submarines, as well as the Yasen multipurpose attack subs.

Over the last years, major investments have been made in local infrastructure, including quays, roads and weapons storage facilities.

Gadzhievo is located about 50 km north of Murmansk. It is part of the closed military municipality of Aleksandrovsk. The town has a population of about 13 thousand.