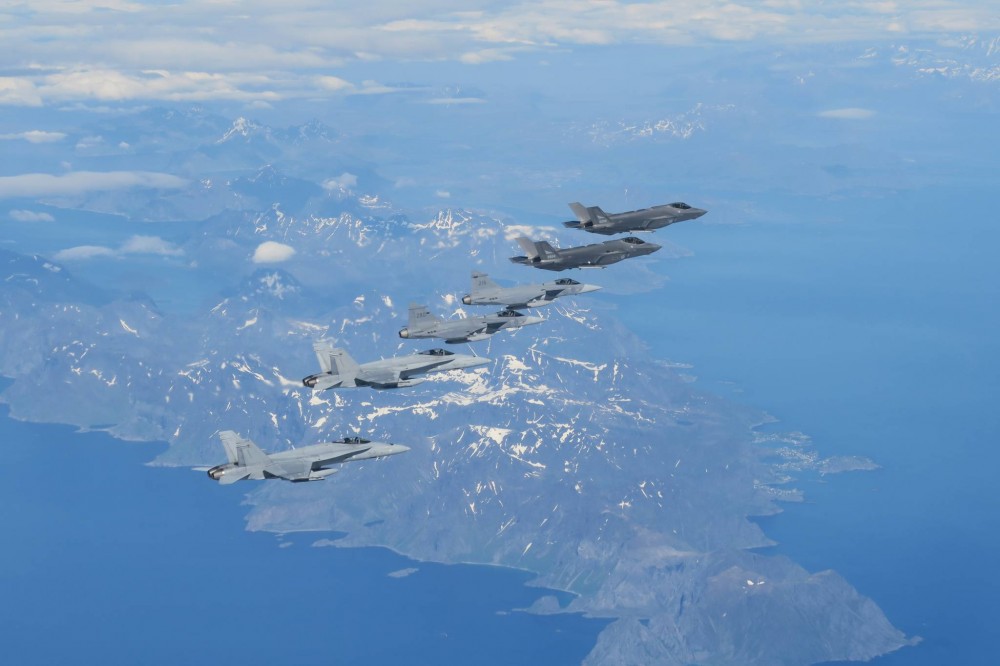 Three countries - one mission: F-35, JAS 39 Gripen and F/A-18 fighter jets from Norway, Sweden and Finland in joint formation in the skies about the coast to the Norwegian Sea. Photo: 332 Squadron / Norwegian Air Force

In joint training above the skies along the coastline to the North Atlantic, Norwegian, Swedish and Finnish fighter jets demonstrate what will be NATO’s new powerful capacities in the north.
Read in Russian | Читать по-русски
By

“The main objectives of this activity is to train planning and leadership of allied forces in the north, as well as to demonstrate NATO’s ability to conduct air power in a complicated scenario over large distances,” said Chief Communication officer with the Norwegian Air Force, Lt Col Stine Barclay Gaasland to the Barents Observer.

She said about 45 aircraft took part in the training, including fighter jets, tankers, a surveillance plane (AWACS) and transport planes.

In addition to the fighter jets from Sweden, Finland and Norway, participating NATO countries in the drill on June 2 included Belgium, France, Germany and Great Britain.

The training happened along the west coast of Norway, from Møre in the south to Nordland above the Arctic Circle in the north.

“This is the first time we are conducting such an advanced exercise with NATO and partner nations, which also includes Sweden and Finland,” said Chief of the Air Force, Major General Rolf Folland in a prepared statement.

The joint Nordic air force capacities in northernmost Europe will become very powerful. Last week, Finland decided to base the first new F-35 fighter jets at Rovaniemi Air Base located on the Arctic Circle and less than 400 kilometers from Russia’s submarine bases on the Kola Peninsula. Sweden has an air base in Luleå and the three Nordic countries have said the advantage of NATO membership is strengthening shared military capacities.

When joining NATO, Finland will contribute to the cross-border strength of the Alliance’s fleet of F-35s in northernmost Europe will be significant. Norway, which already has received 34 of 52 aircraft, has its main airbase at Ørlandet in the south, but a few of the planes are on so-called Quick Reaction Alert (QRA) for NATO at Evenes airbase north of the Arctic Circle. In total, Finland has bought 62 F-35s that will arrive between 2026 and 2030.

“By joining NATO, Finland will strengthen its own security and that of all of Europe. We are making this historic decision for future generations,” Foreign Minister Pekka Haavisto said in early May as his country announced its desire to join the military alliance.

“We appreciate that Sweden was invited to the multinational vigilance activity executed yesterday. The activity was a fantastic opportunity to train combined air operations and a clear confirmation that the Swedish Air Force is fully interoperable and ready to integrate into the NATO air domain. As a close partner to NATO, well on path to a full membership, that knowledge is more than valuable to perceive,” said Colonel Peter Greberg, Chief of Operations, Swedish Air Force.

During the activity, participants were able to learn from each other and strengthen relationships with other nations operating from across Northern Europe. These large-scale vigilance activities improve the overall cohesion of the Alliance and ensure NATO can cooperate closely with important Partners, the Alliance said in a statement on Friday.

“High intensity, live-fly drills ensure our people and our operational Headquarters are well-prepared to deploy air assets at range to sustain peace and stability,”  Delerce said.