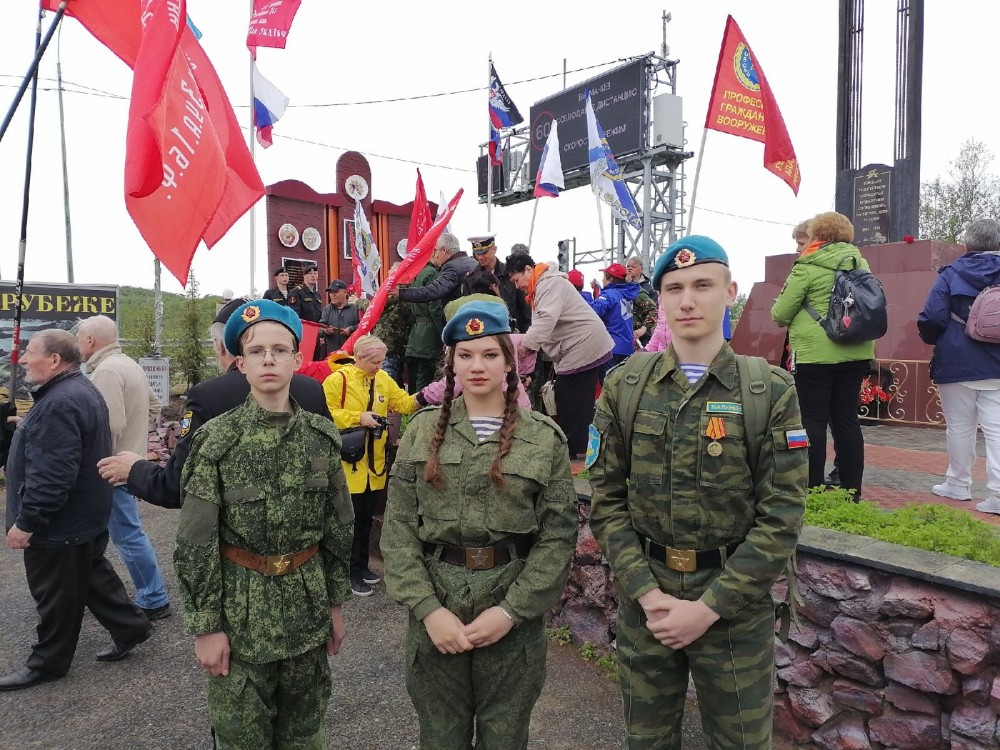 The flags of Moscow’s two puppet regions, the so-called Donetsk and Luhansk people’s republics, waived in the air as locals from the Pechenga district gathered for the opening of a monument honoring war and bravery in Ukraine.
Read in Russian | Читать по-русски
By

The Kola Peninsula has hundreds of war memorials paying tribute to Soviet soldiers and victims of Nazi German aggression during the Second World War. Now, new monuments are popping up to the honor of Russian aggressors and war criminals fighting in Ukraine.

One of them was officially opened on 22nd of June in Titovka, a site in the heavily militarized area located just few kilometers from the border to Norway.

However, unlike most of the Soviet 2WW memorials in the area, the new monument does not honor men fallen in battle, but rather the war and battle in itself.

The monument has the shape of a small wall made by bricks and includes three plates with inscriptions. The top one explains that “this memorial is erected to the honor of participants in the fight against Fascism, Nazism and terrorism.”

The second plate includes a quote by Vladimir Putin.

“Today, it is our common obligation not to allow the reemergence of Nazism that has brought such suffering to the people of various countries. It is essential to preserve and convey to our descendants truth about the happenings of the war years, commons spiritual values and traditional brotherly friendship.”

The third plate, paradoxically, quotes part of a poem by Anna Akhmatova, the 20th Century poem that herself in brutally experienced the horrors of the Stalin era.

“We know what now lies in front of us and what is today happening. The hour of bravery has come to our time. And bravery will not abandon us,” the poem reads.

However, Anna Akhmatova was not a patriotic Soviet praising war and repression. Quite the opposite. She was the antipode of militarism and suppressive rule. And the people behind the monument in Titovka clearly do not comprehend the anti-authoritarian character of her writing.

Akhmatova was born in Odessa and studied in Kyiv. She experienced the blockade of Leningrad and regularly read for soldiers in hospitals and on the front line.

But several of her most famous works were in their essence aimed against the totalitarian rule of the time. And her work was condemned and censored by Stalinist authorities. Her first husband Nikolai Gumilyov was executed and her son spent many years in the Gulag.

The opening of the new monument in Titovka is actively covered on social media by local semi-militarized groups such as the Vityaz. The group that includes mostly former military men and FSB officers, on its VK page says that its main mission is to “prevent the cultivation of false values among youth and to educate the spirit of patriotism.”

The monument is located next to a memorial praising 2WW soldiers and a small outdoor exhibition showing the heavy war action in the area. Titovka was controlled by invading Germans during much of the war and remnants of a ropeway used to transport goods to the front is still visible on site.

Nearby are several major military bases, operated by the Northern Fleet and its 200th Motorized Rifle Brigade. Nearby is also the 61st Naval Infantry Brigade in Sputnik.

A big number of troops from the local brigades are participating in war against Ukraine and losses have been dramatic. Several hundred men are believed to have been killed outside Kharkiv in the initial part of the offensive and many more during subsequent clashes.

That includes a significant number from the 140th special purpose detachment in Vidyaevo.