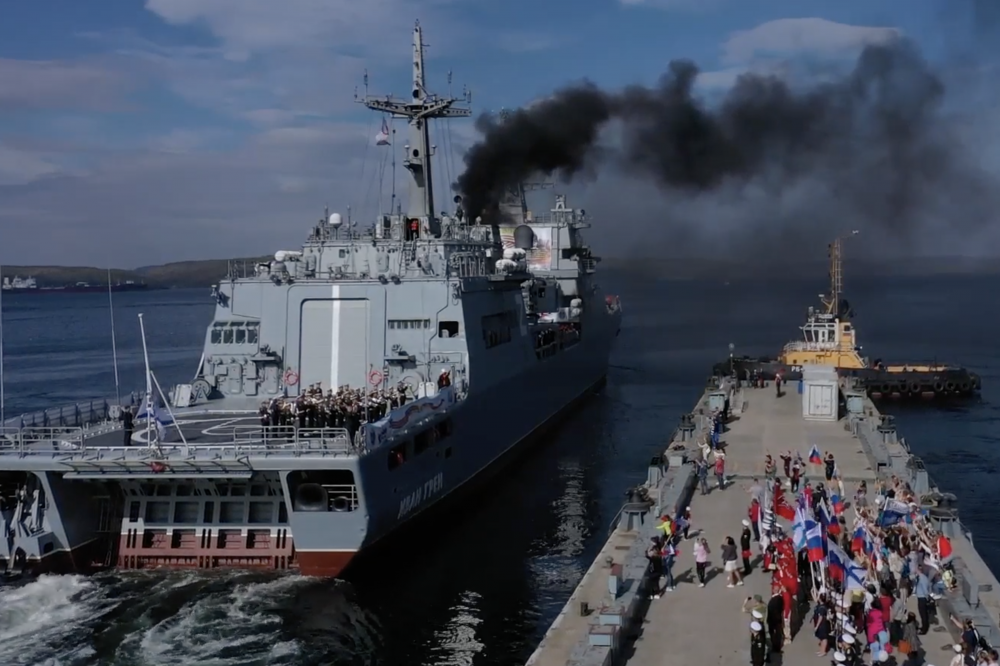 The large landing ship "Ivan Gren" sailed out of Severomorsk towards the White Sea with the slogan "The Power is the Truth".

Framed with children in military uniforms, the festivities at the pier in Severomorsk on Monday were dedicated to supporting the war on Ukraine. Russia’s first propaganda voyage with the large landing ship "Ivan Gren" will sail to a number of remote ports and last until early October.
Read in Russian | Читать по-русски
By

It was in his opening speech at the so-called first International Anti-Fascist Congress in the Patriot Park in Moscow on Saturday that Defense Minister Sergei Shoigu announced that “Ivan Gren” would embark on the agitation-propaganda cruise entitled “The Power is in Truth.”

Shoigu said the tour will be a first-of-its-kind.

“Within its framework, the “Ivan Gren” large landing ship will make a voyage along the Northern Sea Route and enter remote cities and garrisons,” the Defense Minister said.

Sergei Shoigu continued by calling on the international community to unite efforts in the fight against Nazism.

Up North in Severomorsk, where the voyage started, Deputy Commander of the Northern Fleet, Rear Admiral Igor Kurochkin, continued the short-circuited nonsense.

“The main thing that we want to say with this move is that we warmly and sincerely support our servicemen who courageously and heroically solve the tasks of the special military operation,” Kurochkin said as quoted by the navy’s press-service.

The Rear Admiral is in charge of military-political affairs in the powerful Northern Fleet.

One of the huge banners on the warship shows an aggressive American fist being stopped by a defending Russian fist. On the sides are photos of small children wearing military helmets and uniforms.

Monday’s event in the port of Severomorsk is not unique. Across Russia are schoolchildren and preschoolers participating in various demonstrations in support of the war on Ukraine. Emotional pictures of weaponized children are used to legitimize the brutal war crimes launched by the regime in Moscow.

On board the “Ivan Gren” was both schoolchildren from the Murmansk Nakhimov Naval School and teenagers with Yunarmiya, the military-patriotic movement associated with, and financed by Russia’s Defense Ministry.

One of the banners reads: “For (Za) Memory, Truth and Victory!!!”

First port call for the agitation-propaganda sailing is Kandalaksha on the southern shores of the Kola Peninsula. Locals will on August 24th be welcomed onboard to see the exhibitions of weaponry and told stories about how soldiers with the Northern Fleet are heroically fighting for the fatherland in Ukraine.

On display in the hangars and rooms that normally carries tanks and attack helicopters are models of nuclear submarines, aircraft, warships and other military gear. The Northern Fleet’s naval orchestra will perform patriotic compositions and the “Ivan Gren” even bring a song and dance ensemble from Severomorsk.

Second stop on the route is Arkhangelsk, from August 28 to September 1.

Thereafter, the ship sails north across the Barents Sea to Belushaya Guba, the largest military settlement on Novaya Zemlya where Russia in the course of the last few years has modernized the airfield to accommodate fighter jets and anti-aircraft missile systems.

The second stage of the voyage starts on September 19 and will take place in the western part of the Northern Sea Route with Dikson as first stop and Dudinka by the Yenisei River as next port call.

The press service of the Northern Fleet stresses that children and Yunarmiya teenagers will take part in additional events.