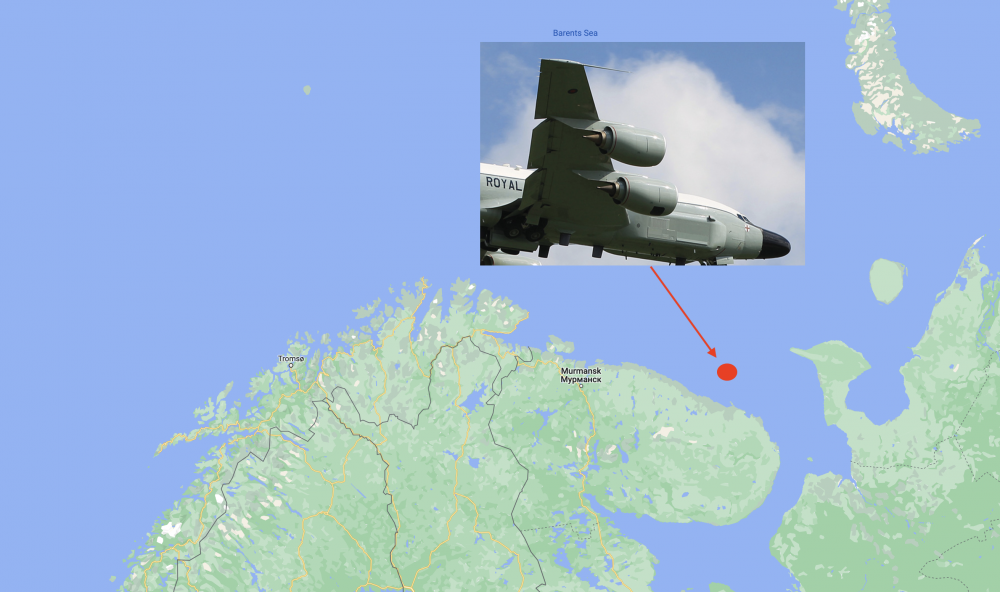 The British C-135W Rivet Joint electronic surveillance aircraft was on mission over the Barents Sea when it allegedly illegally crossed into Russian air space north of the shut-down submarine base Gremikha on the eastern shores of the Kola Peninsula. Map: Google / Photo: Royal Air Force / Barents Observer

A British RC-135 with equipment to collect real-time electronic intelligence data was forced out of Russian airspace by a MiG-31, the Defense Ministry in Moscow claims. Norwegian Defense analyst doubts that that the plane was inside Russian air space.
Read in Russian | Читать по-русски
By

“The aircraft violated the state border of the Russian Federation in the area of Cape Svyatoy Nos,” the short note by the Defense Ministry says.

Cape Svyatoy Nos is a small peninsula stretching out in the Barents Sea from northeast of Gremikha, a closed-down submarine base on the eastern shores of the Kola Peninsula.

Both American and British military operates intelligence gathering aircraft of the RC-135W Rivet Joint. The aircraft is frequently flying missions over the Barents Sea, but violations of Russian airspace have not been reported in recent years.

The Royal Air Force has not commented on the Russian accusations.

Russia’s Northern Fleet is currently exercising in the Barents Sea with several warships including the large nuclear-powered battle-cruiser “Pyotr Velikiye”. Another group of warships from Severomorsk on Monday arrived in the waters near Franz Josef Land as part of the Russian navy’s annual Arctic expedition.

U.S. and British military planes, like the RC-135W are not allowed by Norway to take off from or fly over Norwegian airspace when on spy-missions outside Russia in the north. Such planes, therefore, fly around Norway and are normally conducting refueling over the Norwegian Sea before flying east into the Barents Sea.

On Tuesday, a similar RC-135, operated by the U.S. Air Force is on mission towards the Barents Sea. Around noon Norwegian Time (GMT+2), the aircraft was over the eastern parts of the Barents Sea, tracking data from FlightRadar24 shows.

The American plane took off from Mildenhall Air Base in the United Kingdom.

All airspace outside 12 nautical miles from a coastal state’s baseline is international airspace where all nations are allowed to fly.

“The Americans and Brits have been flying over the Barents Sea since the 1950s, normally from bases in the United Kingdom. There has only been one incident,” Solli says.

“The Soviet Union shut down an American reconnaissance aircraft in 1960 in the Barents Sea because they believed it was inside Soviet air space. It was later acknowledged that the American plane was in international air space,” Per Erik Solli tells.

“I would be surprised if the Brits were flying so close,” he states with reference to Russia’s accusations that the RC-135 violated national borders.  “There hasn’t been any incidents with American or British aircraft flying over the northern since 1960.”

Solli is a former F-16 pilot with the Norwegian Air Force.