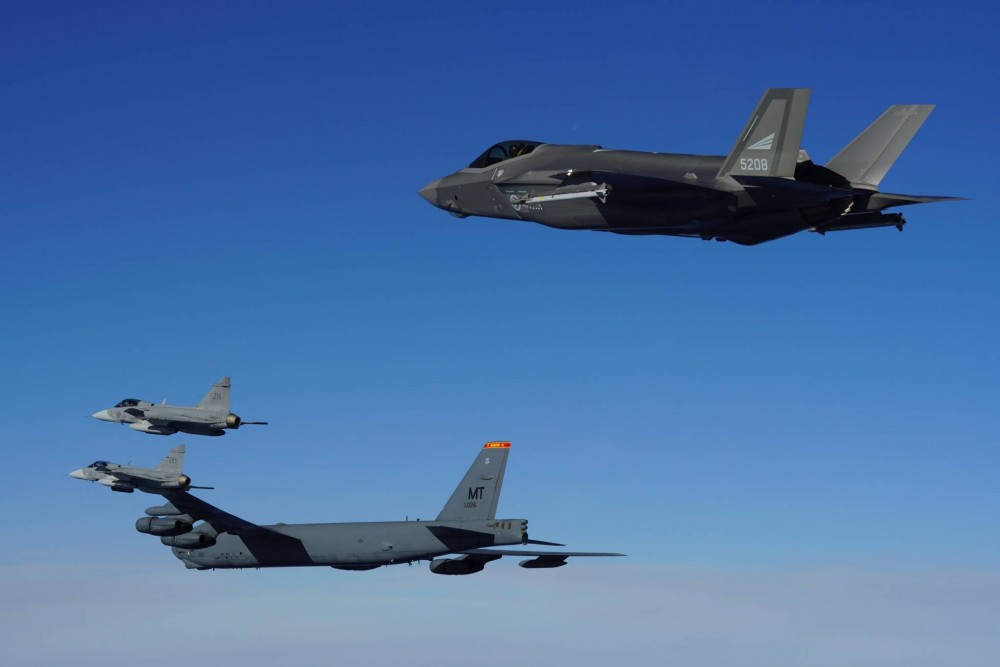 The new NATO in the north: Two Swedish JAS Gripen, a Norwegian F-35 and a U.S. Air Force B-52 strategic bomber flew together in the skies above the Arctic Circle. Photo: Norwegian Air Force

Simultaneously as Russia’s Northern Fleet kicks off a larger exercise in the Barents Sea is NATO flexing muscles in the skies above northern Scandinavia showing how future military operations will look like with new members joining.
Read in Russian | Читать по-русски
By

These photos from Thursday are unique. Never before are images published showing Swedish and Norwegian fighter jets exercising together with the giant strategic B-52 bomber planes.

While the B-52s flew over the North Atlantic from Minot Air Base in North Dakota, the Swedish and Norwegian fighter jets, two JAS Gripen and two F-35, were in the skies over the Norwegian Sea west of Andøya in northern Norway.

The three nations’ aircraft then conducted training together with Norwegian Army units at Setermoen shooting range east of Tromsø.

Sweden, together with Finland, is in the process of becoming NATO members, a decision taken in the wake of the changed security situation in Europe after Russia’s brutal military attack on Ukraine in February

Norway, Sweden and Finland have for years intensified defense cooperation, with special attention to northern regions. With NATO membership, the stronghold on the Scandinavian Peninsula will be of another dimension, compared with Norway as a lonely European Arctic NATO country.

“Seeing our JAS Gripen fighter jets together with several of the heaviest American planes, and Norwegian F-35, is a good visual picture of the strength and solidarity within NATO. Such moments show the military power existing in NATO, but even more important, the unity in the alliance,” said Major General Carl-Johan Edström, Commander of the Swedish Air Force.

Norway has recently parked its fleet of F-16 fighter jets. New F-35 planes, 52 in total, are being phased in. Finland has just decided to buy 64 of the F-35, of which the first will be based at Rovaniemi Air Base in Lapland.

The three Nordic countries will together have some 250 modern fighter jets in less than a decade from now.

“One possibility we in the air defense are considering is the option of establishing a joint Nordic air operation center. Nordic air power and operations could be planned and conducted,” says Folland.

“We believe this would provide for a substantial strengthening of our collective defense.”

The training over northern Norway was followed by a joint exercise with live bombing from one of the B-52s at targets within Sweden’s large Vidsel test range between Jokkmokk and Arvidsjaur.

The American B-52s will for a period be deployed to the Fairford air base in the United Kingdom.

Coincident in time, or not, the Scandinavian, American air force training on Thursday took place as Russia’s powerful Northern Fleet is in full swing with a live shooting exercise in its Barents-Arctic region as reported by the Barents Observer.

Several tens of thousands of square kilometers in the Barents Sea are from Friday, August 19 closed off for civilian shipping and air traffic.

More than 10 warships and submarines, supported by air force and coastal air defense units, will train on repelling attacks on Russia, from the Varanger fjord area and Kola Peninsula in the south to the Arctic archipelagoes of Franz Josef Land and Novaya Zemlya in the north.