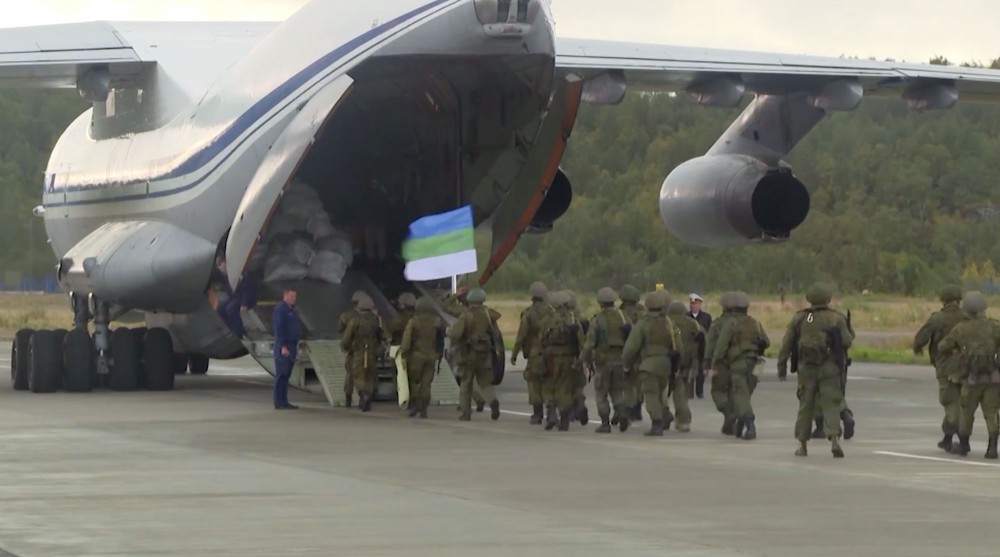 Warriors from the Komi Republic head towards Ukraine after training in the Kola Peninsula. Photo: screenshot from video

Regional Governor Vladimir Uiba says the warriors from his Komi Republic will be a an important "contribution to great victory." But the group of men that this week was sent to the battlefields in Ukraine did not look victorious.
Read in Russian | Читать по-русски
By

“The Republic of Komi and the whole country are proud of you,” regional leader Vladimir Uiba underlined to the about 30 men that were lined up in a ceremony ahead of their departure to Ukraine.

Uiba, who himself does not have a military background, had dressed up in uniform and put medals on his chest. On his caps was a big “Z”, the symbol of Russia’s war against Ukraine.

“For us, this unit is a contribution to the great victory,” Uiba told journalists after the staged show that took place in Severomorsk-3, the Northern Fleet air base outside Murmansk.

The governor has shared footage of the ceremony on his Telegram account.

But is was hardly a unit of elite professionals that this week was sent to fight. The fighters, a mixed group of men of different ages, appeared not very strong nor vigorous.

In the ceremony were also Northern Fleet Commander Aleksandr Moiseev and Bishop Tarasiy of Severmormorsk. The dignitaries shook the hands of the warriors before they embarked on a waiting aircraft that shortly later took off with southbound course.

According to Vladimir Uiba, the soldiers are part of an infantry squadron named “Komi” and adheres to the Northern Fleet’s coastal forces.

“I thank them for their readiness to fulfill their military duty with honor and heroism,” the regional leader said as the aircraft taxed out of Severomorsk-3.

“Power comes with truth! Go with God,” he said as his medals and Nazi-inspired caps fluttered in a strong and icy northern wind.

The dispatch of the Komi squadron comes only few days after a similar force of soldiers from Arkhangelsk was sent to Ukraine. Ahead of its departure, the Arkhangelsk Battalion underwent training in the Northern Fleet’s premises in Pechenga, an area located only few kilometres from NATO country Norway.

The leader of the Komi Republic has been an ardent and outspoken supporter of the war in Ukraine, and has regularly appeared in public with military-style clothes marked with the “Z.”

Uiba has on several occasions been in occupied parts of Ukraine, and his region is investing significant sums in reconstruction of occupied towns and villages. Only few days ahead of this visit to Severomorsk, the Governor visited Rovenky, the town of about 45,000 people where most of the Komi efforts are concentrated.

Following his visits to the occupied territories, Vladimir Uiba was included in the sanctions lists of the UK.