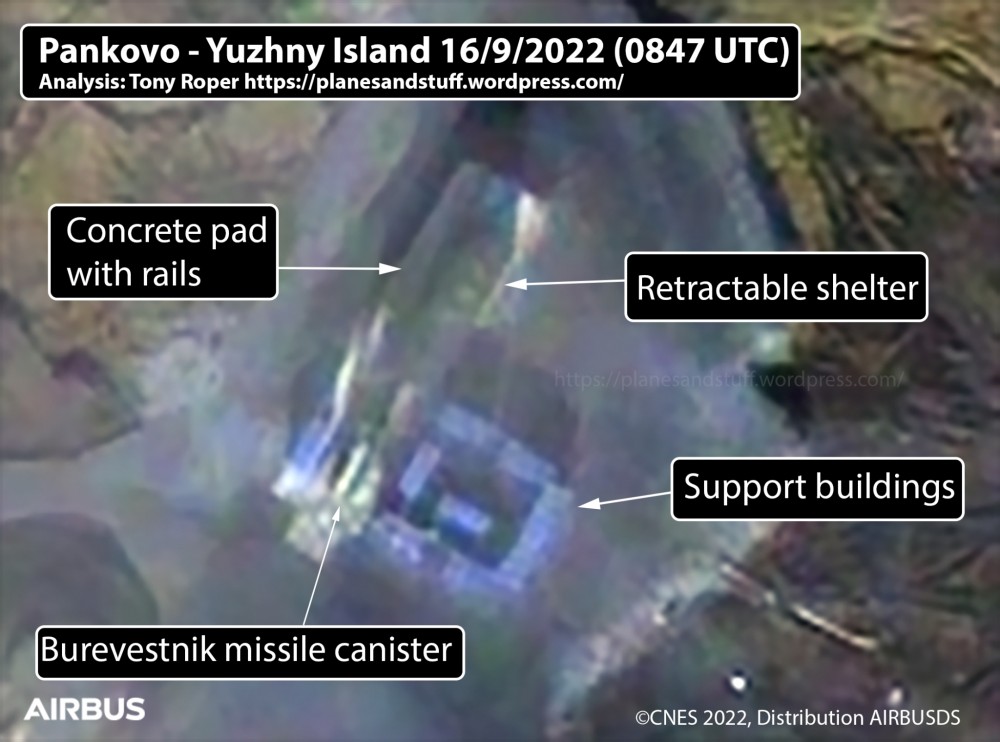 This satellite image shows a canister for the Burevestnik nuclear-powered missile in place next to the retractable shelter at Pankovo test site. Image republished with permission from Tony Roper / planesandstuff.wordpress.com

Russia is about to scale up its dangerous testing of the Burevestnik nuclear-powered cruise missile, according to a study of satellite images obtained by military analyst Tony Roper.
Read in Russian | Читать по-русски
By

Few places on planet earth are surrounded by more secrecy than the remote military test ranges for nuclear material at Novaya Zemlya in the Arctic. Totally forbidden to visitors since the 1950ties as atmospheric and underground nuclear weapons tests were conducted till 1990. Since then, the polygon near the Matochkin Strait has facilitated subcritical nuclear tests.

A bit to the south is Pankovo, a missile launch site where Russia in November 2017 made at least one test flight of the Burevestnik, in the West known as the SSC-X-9 Skyfall.

It could as well be named ‘a flying Chernobyl’ as the missile is powered by a small nuclear reactor which is cooled by the outside air running through the uranium core, leaving behind radioactive isotopes as it is flying.

That is the reason tests of the weapon now take place at one of the world’s most remote locations, hundreds of kilometers from nearest civilian populations.

“Should anything go wrong, then it won’t be so noticeable,” said Tony Roper to the Barents Observer. He has for years studied satellite images from Novaya Zemlya. In recent months, his focus has especially been on developments at the Pankovo site.

This weekend, Roper obtained new satellite images that drove him to blow the whistle.

“It is definitely Burevestnik,” he said.

Tony Roper has published several of the satellite images on his online site, detailing the different infrastructure improvements made at the site this summer and autumn.

The size of the ongoing development is much more comprehensive than previous year’s container-based structures aimed at supporting the test launches of the nuclear-powered missile.

A new jetty is placed on the shore where equipment is landed from ships, the road is improved, helicopter pads are made, new buildings are erected, shelters and concrete pads with rails are assembled.

It is, however, Tony Roper’s latest findings from a space image taken by Airbus on September 16 that prove that the Burevestnik is actually present at Pankovo.

A canister, similar to what previously has been seen in a video by Russia’s Defense Ministry, is now in place next to the rails on the launch pad partly covered by a retractable shelter.

It was in March 2018 the work on developing Russia’s nuclear-powered cruise missile was made public to the outside world. Along with other weapons of mass destruction, President Vladimir Putin showed a video of the Burevestnik in his annual speech to the nation.

Later the same year, U.S. intelligence sources reported about one of the missiles being lost at sea after a test in late 2017.

The building infrastructures to Pankovo are likely brought to shore from Rosatomflot’s nuclear-powered container ship “Sevmorput”, a vessel capable of floating out barges with containers towed to shores by smaller tugs in Arctic coastal areas where no harbor infrastructure is developed.

Rosatomflot is a subsidiary of Rosatom, Russia’s state nuclear corporation also in charge of testing and developing the small nuclear reactors used with the Burevestnik missile.

The Barents Observer has followed AIS tracks of “Sevmorput” via the online exactEarth ShipView since August as the vessel has been shuttling back and forth between Murmansk, the waters just outside Pankovo and Rogachevo, the main military settlement on the southern shores in Novaya Zemlya.

The town is home to one of Russia’s upgraded air bases in the Arctic and also facilitates the polygon for sub-critical nuclear tests in the tunnels near Matochkin Strait. Helicopters flying personnel to Pankovo are based here, and it is likely that Rosatom’s specialists for developing and testing the Burevestnik missile are commuting to Rogachevo from mainland Russia.

Testing such a flying reactor is risky. What goes up must come down.

It will eventually have an impact zone, whether crashing at sea or ground as planned or by accident mid-air.

The infamous accident in the White Sea outside the Nenoksa test site in 2019 happened on a barge during the salvage work of a crashed Burevestnik missile. Five Rosatom experts were killed after the explosion, which also caused a spike in radiation over the nearby city of Severodvinsk.

There have also been speculations that numerous low-level measurements of radioactive isotopes in northern Scandinavia in recent years have been related to Russia’s testing of secret nuclear-powered weapons systems.

Objectives with such tailored weapons could be to easier penetrate missile defense systems, or to compensate for conventional inferiority.

“It is our worry that the New Start Treaty is not sufficient enough to cover the new technological developments,” Chief of the Norwegian Intelligence Service, Vice Admiral Nils Andreas Stensønes told the Barents Observer.

Stensønes added that the agreements should be updated.

An advantage of a nuclear-powered missile, according to Putin’s 2018 speech, is its capability to avoid any anti-ballistic missile defense systems. The missile can also, at least theoretically, conduct mid-air navigation and has a range much longer than any other cruise missile.

The Burevestnik is designed to carry a nuclear warhead.