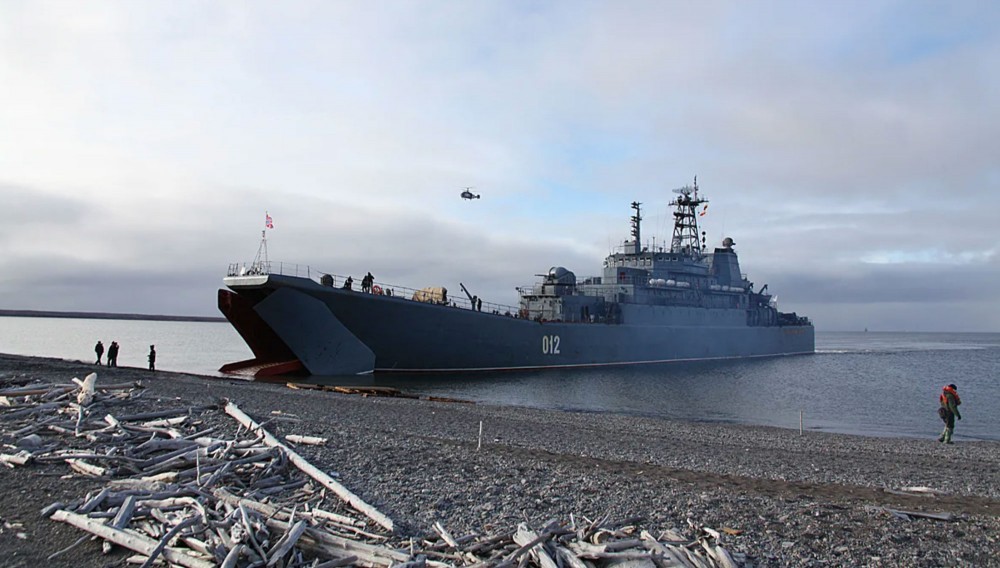 Thousands of kilometres from the violent coasts of the Black Sea, a potent Russian naval force arrives in the New Siberian Islands.
Read in Russian | Читать по-русски
By

The Admiral Levchenko on the 10th of August set out from the Kola Bay on an expedition that would bring the ship, a destroyer of the Udaloy class, and its crew across major parts of the Russian Arctic coast.

Together with landing ship Aleksandr Otrakovsky and naval tanker Sergei Osipov, the 163 meter long warship first sailed to Franz Josef Land where it took part in military drills together with personnel from Nagurskaya and Arktichesky Trilistik, the local airfield and military base at the island of Alexandra Land.

The ships subsequently proceeded into the Kara Sea where they together with the FSB Coast Guard engaged in a counter-terrorism exercise around the Prirazlomnaya oil platform.

As the ships sailed further east on the Northern Sea Route, the sailors engaged in shooting with artillery and cruise missile system Kinzhal, as well as with anti-submarine training, the Northern Fleet press office informs.

The Admiral Levchenko also engaged in training with anti-submarine rocket launchers, as well as with torpedo shooting on enemy subs.

On the 12th of September, the ships arrived in Kotelny, the island that houses the Temp airfield and Severny Klever base. During their stay in the New Siberian Islands, the Northern Fleet sailors will train landing operations and take part in the launch with coastal missile system Bastion.

The voyage is the tenth of its kind. The first Northern Fleet expedition to Kotelny was organized in 2012, and was followed by a bigger operation in 2013 when when battle cruiser Pyotr Veliky brought equipment to the base. The Kotelny base houses a major new military trefoil and the upgraded Temp airfield.

It might feel like a welcome relief for the several hundred men that are onboard the three ships.

The brand new Severny Klever base can offer fitness activity in sport halls, saunas and even a church.