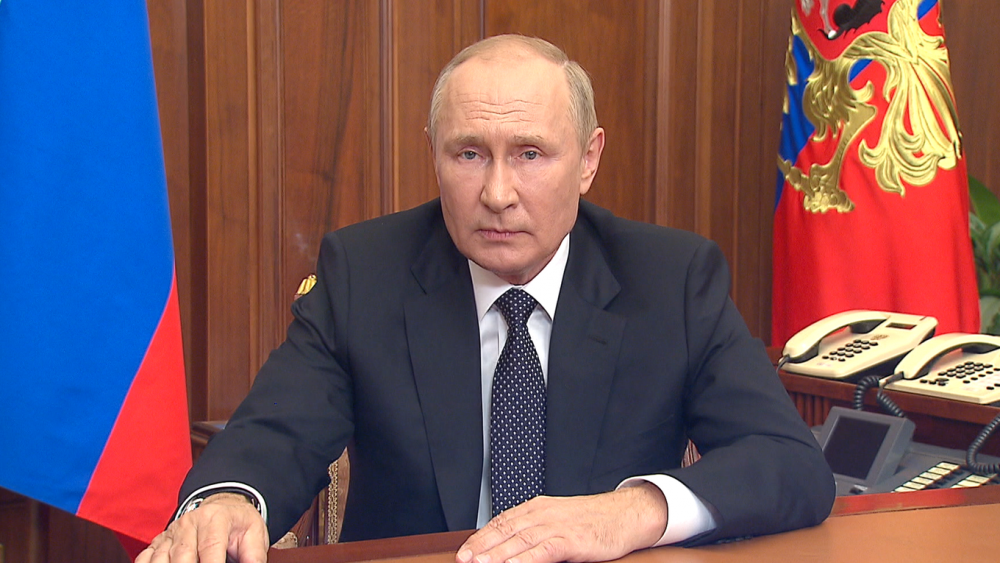 Putin said he would inform lawmakers of both houses of Russia’s parliament in writing later Wednesday.

“Only those citizens currently in the reserve will be subject to a call-up for military service, first and foremost those who have served in the ranks of the Armed Forces,” Putin said in the pre-recorded video address.

In a televised address minutes after Putin had finished speaking, Russian Defense Minister Sergei Shoigu said that 300,000 Russian reservists will be called up for service as part of the “partial” mobilization.

Putin justified the decision by describing fierce battles for the Donbas region of eastern Ukraine and claiming the West was pushing Ukraine to attack Russian territory.

“In Washington, London and Brussels they are directly pushing Kyiv to shift the military action to our territory… they talk about how all available means should be used to destroy Russia on the battlefield with the ensuing loss of political, economic, cultural and all types of sovereignty and the total plundering of our country,” Putin said.

He also threatened a response to what he called the West’s “nuclear blackmail” against Moscow.

“I’m not talking about Western-encouraged shelling of the Zaporizhzhia nuclear plant, which threatens nuclear disaster, but also senior representatives of leading NATO states allowing the possibility and admissibility of using weapons of mass destruction against Russia, nuclear weapons.”

“Those who allow themselves such statements on Russia, I’d like to remind you that our country has various [weapons] of destruction, more advanced than NATO countries,” he continued.

“When the territorial integrity of our country is threatened, we will certainly use all the means at our disposal to protect Russia and our people. This is not a bluff.”

A decree on mobilization subsequently published on the Kremlin’s website stated that mobilized soldiers’ contracts will not expire “until the end of the partial mobilization,” with only age, health and imprisonment listed as exceptions.

All those to be mobilized to fight in Ukraine will receive the same salaries and bonuses as those who sign a military contract to serve in the Armed Forces and mobilized men will undergo extra training before being sent to the front, Putin said.

In the first official estimate of Russia’s battlefield losses since late March, Shoigu announced that 5,937 Russian soldiers had been killed in Ukraine since the start of the fighting. Evidence from the battlefield and publicly available information in Russia suggests the real figure is significantly higher.

Shoigu claimed Wednesday more than 61,000 Ukrainian soldiers had been killed and 49,000 wounded since February.

Following the announcement, the Vesna (Spring) opposition movement called on Russians across the country to protest Wednesday evening.

“Thousands of Russian men — our fathers, brothers and husbands — will be thrown into the meat grinder of war. What will they die for? Why will mothers and children shed tears? For Putin’s palace? Now the war will truly come to every home and every family,” Vesna said.