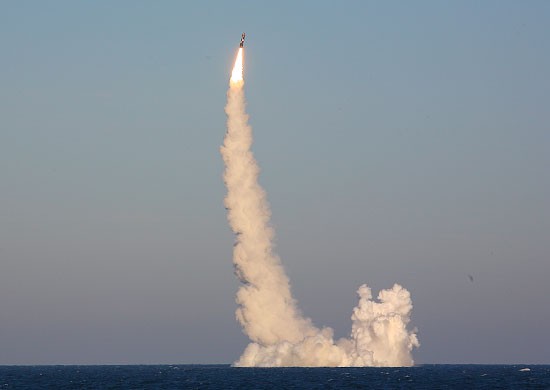 The latest Borei-A submarine "Generalissimo Suvorov" on Thursday successfully launched a Bulava ballistic missile from the White Sea that hit a target at the Kura range on the Kamchatka Peninsula.
Read in Russian | Читать по-русски
By

The launch on November 3 was expected as the submarine recently sailed out from the Sevmash yard in Severodvinsk for the final state tests.

Notice to Air Missions (NOTAMs) activated in the White Sea for the dates 3 to 5 November indicated a ballistic missile launch was coming.

The Defense Ministry informs that the missile was launched from the submerged position and the target on Kamchatka was hit.

It is expected that the new submarine will be commissioned to the Pacific Fleet by the end of the year.

The “Generalissiumus Suvorov” is the third Borei-A sub and the sixth in the class. It carries a total of 16 Bulava missiles. Each of the Bulava-missile is armed with 6 nuclear warheads.

The three first of the Borei-class carry the same number of missiles, but have a slightly different design shape and more analog control systems than the newest subs.

Russia has four more Borei-A class under construction at the yard in Severodvinsk, and additional two are supposed to be laid down in 2023.