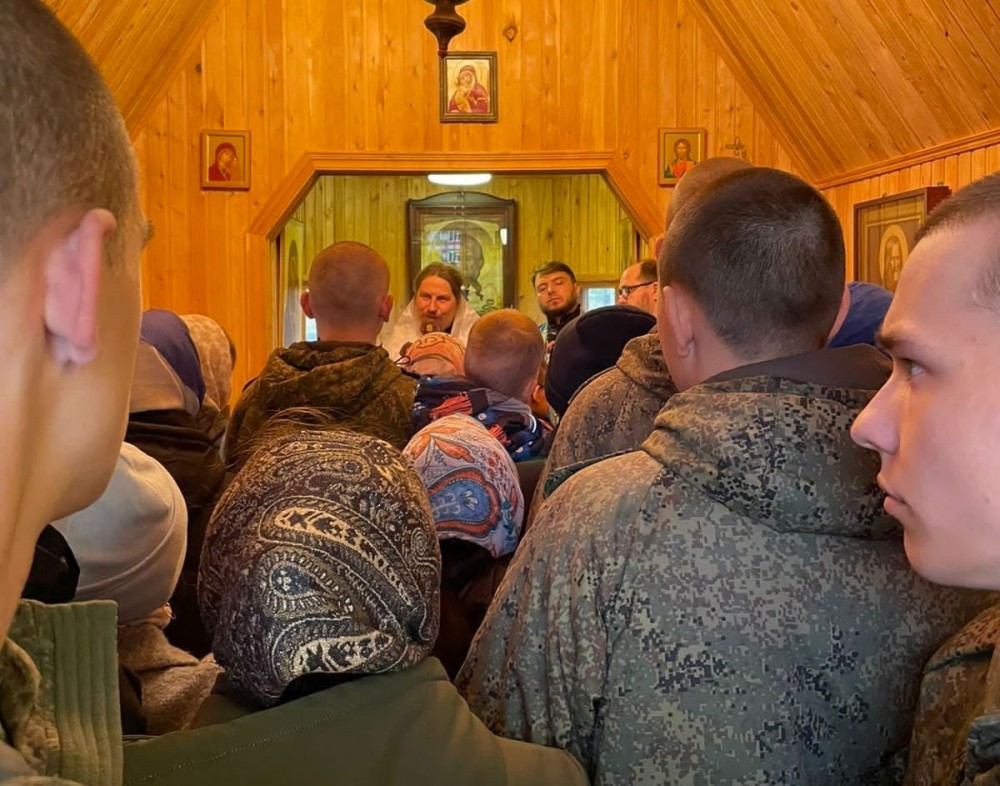 After a period of restoration, the main church icon of the 61st Naval Infantry Brigade is returned to Sputnik, the garrison town located near the border to Norway and Finland. "It will give the marines inspiration to take part in special military operations," the local church says.
Read in Russian | Читать по-русски
By

There was jubilation in the tiny church building in Sputnik as the icon of St. George, the main patron of the potent military force, was put back on the wall.

The icon of the military saint had been under restoration for quite some time. It was now back with fresher colors, new frame and materials. On the sword sheath of the warrior saint is now painted the logo of the brigade; a polar bear on top of a hill and an anchor.

The saint that originally was a soldier in the Roman Army and gave his life to Christianity in the 4th Century will help heighten the spirit among the soldiers, the Church argues.

“The holy protector of our forces, the great martyr of Georgy Pobedonostev (George the Victorious), graciously safeguards and inspires the marines to successfully execute military objectives and participate in special operations and war actions,” the congregation writes on its social media page.

The soldiers in Sputnik are considered among the best in the country. They belong to the naval infantry of the Northern Fleet and are trained for special operations. Many of them have fighting experiences from Syria and other places, and hundreds of them were deployed in Ukraine after the 24th of February.

A big number of the warriors have lost their lives on the Ukrainian battlefields. Many are believed to have been onboard the three landing ships from the Northern Fleet that before the start of the onslaught made it into the Black Sea.

In early November, the Odessa Journal reported that the brigade had suffered new serious losses along the Oskol River in northeastern Ukraine.

The congregation in Sputnik is headed by Archpriest Sergey Cherichenko. He underlines the importance of the Russian Orthodox Church in the borderland to NATO member Norway.

“A unique feature about church service on the northern boundaries of Russia is an emphasis on the strengthening of a spiritual forward position on the border to Europe in a strategically important neighborhood to NATO,” he writes in a comment on the return of the icon.

“Spirituality gives birth to an attentive soul that gives a significant advantage in mind and meaning over the enemy,” he adds.

According to the prelate that previously served in Teriberka and Severomorsk, Russia’s stand-off with the west is all about values.

“It is sufficient to stay an honest patriot of one’s country, someone that does not allow fake men (muzhelozhniki), trans people and eaters of fast-food to encroach on our sanctuaries, as well as on our reserves of natural resources that was given to our land by God so that the decent People that carries the religious mission could live here happily.”

Father Sergey is believed to be closely associated with Metropolitan Mitrofan, the hardline church leader in Murmansk that has repeatedly described the war against Ukraine as a war against Antichrist.

While Metropolitan Mitrofan heads the Russian Orthodox Church Departure on Sport and Physical Culture on national level, Father Sergey is the one that has responsibility for that same department on the regional level in the Kola Peninsula.

The local archpriest is himself an active sportsman. On his personal VK page, he eagerly shows off how he travels around the country with a group of young kickboxers. He also regularly posts video clips that show how he exercises in the gym.

The prelate is frustrated about the big number of Russian men that seek to avoid mobilization.

In a VK post, he describes how he previously got complaints from people that reacted to his mixing of kickboxing activities and church service. But now, the same people take contact to ask how to avoid military service, he says.

Father Sergei appears to show little mercy for these people.

“I am not ready to interact with deserters and traders of the Motherland. God will be the Judge of these poor bastards that have to carry such a heavy cross and pitiful burden to Hell,” he writes.

“The time has run out for words, council and preparation! The time has come for action and silent execution of orders!” he underlines.