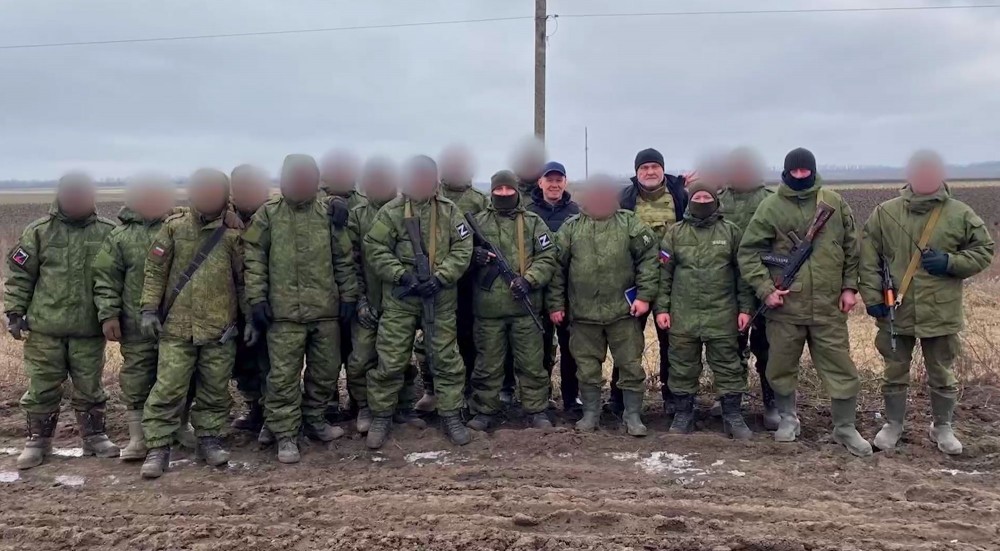 Vladimir Uiba together with mobilized warriors from the Komi Republic. Photo: Screenshot from video at Telegram

Hundreds of men are perishing every day, but leader of the north Russian Komi Republic assures that his mobilized countrymen are all fine.
Read in Russian | Читать по-русски
By

“Hello from one of the units of mobilized soldiers,” Vladimir Uiba says in the native Komi language in an address to his countrymen. He stands among armed warriors, reportedly somewhere in occupied Ukraine.

He himself is carrying a uniform with a “Z” on the shoulder.

“I have talked with the boys and their commanders, and there are no one killed or injured in the battle unit,” Uiba underlines in the video report posted on his Telegram channel.

The governor also underlines that living conditions for the warriors are good.

“There are no problems with accommodation. Everyone is accommodated either in trench shelters or regular houses,” he explains.

And he makes clear that the warriors have gotten additional food and supplies. Uiba is filmed as he himself drives a truck loaded with foodstuff, drinking water and equipment granted by his Komi region.

“Everything that the guys have requested, we have brought them. Now they will have better conditions, both with regard to the additional foodstuff, such as ham, that we have brought.”

It is not the first visit to occupied Ukrainian lands of the warmonger Komi leader. Since Russia’s massive onslaught on Ukraine in February 2022, Vladimir Uiba has several times visited Donbas. He has also made visits to training facilities for mobilized Komi warriors.

It is not clear exactly where Uiba made his most recent visit, but he underlines that it is “in one of the regions that now has become Russian.”

The governor appears confident that the soldiers will return home safely.

“The main task for the boys is to win the war and go home alive and healthy,” he underlines.

“I have conveyed to the guys greetings from everyone in our region along with our belief in them and their victory, and confidence that they will fulfil their duties and come home victoriously.”

The video address of Vladimir Uiba comes amid reports of massive casualties among the attacking Russian soldiers. According to the Ukrainian Ministry of Defense, more than 120,000 Russian men had lost their lives by 20th of January.

Other sources confirms the high losses. In a recent interview, Head of the Norwegian Armed Forces Eirik Kristoffersen said that almost 180,000 Russian men have either lost their lives or been injured during the 11 months of war.

Losses have been significant also among warriors from the Komi Republic. In the period between April and December 2022, Governor Uiba himself announced the death of more than 60 soldiers from his region.

Vladimir Uiba has his background from the healthcare sector and has no military background. However, since the start of the full-scale invasion, he has frequently appeared in public dressed in uniforms marked with a “Z”, the Nazi-inspired symbol of Russia’s onslaught on the neighboring country.