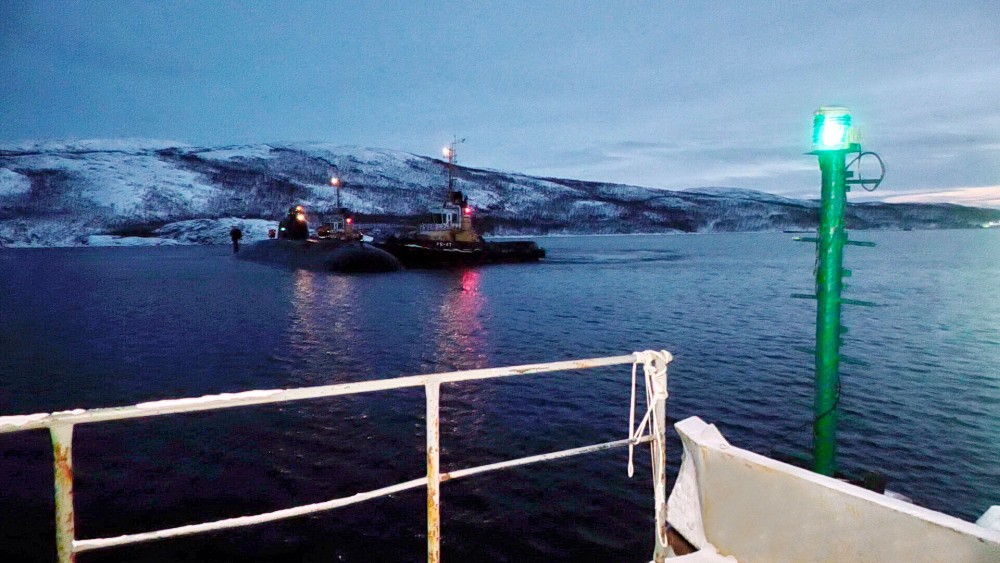 Nuclear sub returns to Russian Arctic base after 7 years upgrade

The "Tambov" will strengthen our position in the North, mayor of Navy town Vidyaevo said as he greeted the homecoming of the Victor-III class submarine.
Read in Russian | Читать по-русски
By

It was almost the darkest day of the year in the far northern Kola Peninsula when the 106 meter long vessel on the 20th of December sailed into the port of Ura Guba.

On the local pier was waiting a host of distinguished representatives of local authorities and the Northern Fleet. Among them was Sergei Bogza, town Mayor of Vidyaevo, the nearby settlement that houses many of the local sailors and servicemen.

“The vessel has returned home, and that means that our position in the Northern direction is further strengthened,” he said in a comment on his VK page.

It was one of the first official duties of the kind for the politician that was sworn into office in November 2022.

The Ura Guba base is located on the Barents Sea coast about 100 km northeast of Murmansk City. It includes submarines from the Northern Fleet’s 11th and 7th Divisions.

The K-448 Tambov moored next to the Pskov, a Sierra-II submarine, photos from site show.

The Tambov has not been in Ura Guba for many years. The submarine, a vessel of the class 671RTM(K) Shchuka (Victor-III), was reportedly taken to ship repair yard Nerpa, Murmansk region, in 2015 and has since been under repair and upgrade.

The Tambov was commissioned in 1992 and is the only Victor-class sub built after the collapse of the Soviet Union. It belongs to a family of 25 Victor-III vessels, practically all of which have been scrapped and decommissioned.

In 1996, the submarine was spying on an ongoing NATO naval exercise near British waters, reportedly unnoticed by the foreign vessels, when one its its sailors fell seriously ill. The captain decided to surface in the midst of the exercise area and the sailor was evacuated to the British aircraft carrier Glasgow and flown by helicopter to a British hospital. Video materials from the event were recently published by military news site TV Zvezda.

The Victor-III class is known for its superior acoustic performance and was quieter than all previous Soviet submarines. The character of the recent upgrades are not known.

According to a Russian military news site, the Tambov is still in a process of testing following the modernisation.

From before, the Northern Fleet includes another Victor-III sub, the K-138 Obninsk. In 2017, the vessel took part in a cat-and-mouse game in Barents Sea together with ballistic missile carrier Yury Dolgoruky.

Reportedly, a third of the remaining Victor-IIIs, the K-414 Daniil Moskovsky, was sent to decommissioning in November 2022.