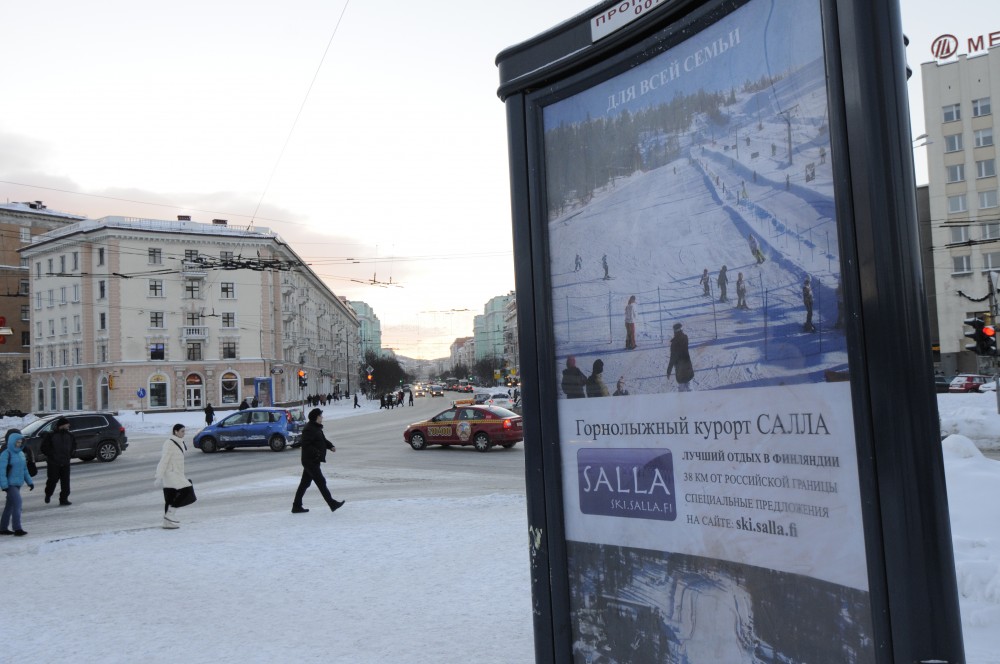 Advertisement for Salla ski-resort in Finnish Lapland on the main square in Murmansk. Photo: Thomas Nilsen

Finland has lost one third of its Russian visitors and expects incomes to halve, a new reports shows.
Text og photo:

The number of Russians crossing the border to Finland in January-October 2015 was 5.1 million, which is 2.2 million or 30% less than in the same period of 2014. The Finnish Border Guard Service believes this trend will continue, as the main reasons for the downfall in cross-border traffic are the unstable economic situation, the weak ruble and the decline in Russians’ purchasing power, Fontanka.fi writes.

According to a recent report published by the Finnish Commerce Federation, Russian tourists’ spending on goods and services in Finland in 2015 will probably be half of the result from 2014, when the total consumption reached €925.

According to border interviews conducted in January-August, each Russian visitor spend one third less on services and one fourth less on shopping than they did the previous year.

Even if the Russian economy was to improve considerably, this does not necessarily mean that Russian shoppers will return to Finland in the same amount as before, the trade union believes:

“Right now, the drop in the number of Russian travelers is a result of the financial crisis and the ruble’s exchange rate, but there’s no guarantee that things would return to their former state after the crisis is over,” says Jaana Kurjenoja, Chief Economist of the Finnish Commerce Federation.

Kurjenoja explains that the middle-class Russians with a relatively high level of income sees no reason to head to Finland as online shopping is gaining ground.

According to the report, 39% of the Russians visiting Finland in 2014 answered that they had bought goods or services online at one time or another. This year, that percentage had risen to 66.

“From a global perspective, Russia is seen as one of the most interesting e-commerce markets, and many international fashion brands, for instance, are planning to open online stores there, if they haven’t already done so,” Kurjenoja says to the Finnish Commerce Federation’s website.