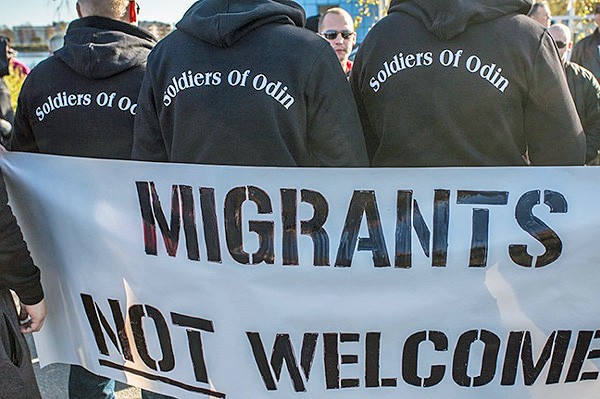 Anti-immigrant group in a demonstration in Finland. Photo from vuodatus.net

A movement of self-proclaimed patriots patrolling the streets to protect native Finns from immigrants has spread from the northern town of Kemi to all over Finland. “We have no need for vigilantes like “Soldiers of Odin”, the Government says.

The anti-immigrant group “Soldiers of Odin” established street patrols last autumn in Kemi, when large numbers of people fleeing conflicts in the Middle East began to arrive in Finland, Lapin Kansa reported.  Kemi lies near the border community of Tornio, which became an entry point for migrants arriving from Sweden.

At the time the group, which members like to wear black jackets adorned with a symbol of a Viking and the Finnish flag, said that it was responding to a security threat posed by incoming asylum seekers.

Members blame “Islamist intruders” for what they believe is an increase in crime and they have carried posters at demonstrations with slogans such as “Migrants not welcome”. The group denies racism allegations and describes itself as “an immigration-critical, yet safety-oriented, club with an interest in street patrolling” and “as the eyes and ears of the police”, according to Helsinki Times.

“Soldiers of Odin” claims that groups have been established in 23 Finnish towns. The group´s Facebook page has more than 12.000 “likes”.

Finland received about 32,000 asylum seekers last year, a leap from 3,600 in 2014. Yet it has a relatively small immigrant community, with only around 6 percent of the population foreign-born in 2014 compared with a European Union average of 10 percent.

No place for vigilantes

The government has made clear there can be no place for vigilantes in Finnish society.  “As a matter of principle, police are responsible for law and order in the country,” Prime Minister Juha Sipila told public broadcaster YLE, according to Reuters. “Civilian patrols cannot assume the authority of the police.”

Finland’s chief prosecutor Matti Nissinen has sharply condemned the appearance of citizens’ patrols in Finnish cities. He said that history has shown that nothing good has ever come of such movements.

Groups like “Soldiers of Odin” don’t belong in a society that has an organized police force, Nissinen said to YLE.

“I think the practice looks very suspicious. In my view it doesn’t belong in a society that has an organised police force and in which police have a certain jurisdiction. I don’t see this as a good thing at all,” Nissinen said.

Finnish law does not prohibit the practice as the constitution guarantees citizens the right to free movement. Police chief Seppo Kolehmainen has previously noted that this does not give street patrols the right or the authority to intervene in other people’s activities. He said that police will monitor the situation and take action against any possible illegal actions.