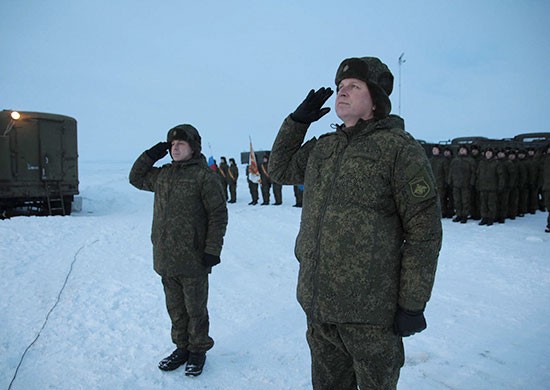 These guys make the most in the Russian north. Among the military units in Novaya Zemlya is the new regional missile brigade. Photo: Mil.ru

Novaya Zemlya might not offer comfy living, but salaries on the closed and militarized archipelago are the highest in Arctic Russia.
By

Figures from the Russian Statistical Service (Rosstat) show that Novaya Zemlya has the best-paid jobs in the whole Russian Arctic. According to the Rosstat office in Arkhangelsk, the average monthly salary in the archipelago amounts to 82.000 rubles (€1000), far more than anywhere else in the Russian north.

You will however hardly get one of the Novaya Zemlya jobs. The whole local population of about 2500 is exclusively linked with defence-related activity, among them the new regiment equipped with S-300 missiles. Also nuclear weapons experts are abundant at the islands, which was the Soviet Union’s main test site for the lethal mass destruction weapons.

The salary-level in Novaya Zemlya can be explained by the area’s extreme climatical conditions. However, at the same time, it illustrates a bigger and more general trend. In all of Russia, the defence industry is now one of the quickest developing part of the economy, and one of the best paid.

Consequently, also the cities of Severomorsk and Severodvinsk are among the best-paid places in the Russian North. The two places, the Northern Fleet headquarters in Murmansk Oblast and the navy engineering city outside Arkhangelsk respectively, pay their workers an average of more than 40.000 rubles.

Figures from Rosstat show that average salaries in Severodvinsk amount to 46,700 rubles (January-September 2015) while people in Severmorsk in average make 42,300 rubles.

Only the oil-rich Nenets Autonomous Okrug is able to compete with the military men in the neighboring regions. Figures from the regional statistical office show that locals in the Nenets region now make a monthly average of 65,000 rubles (€790).

In Murmansk Oblast, the average salary now amounts to about 33,000 rubles (€400), while people in Arkhangelsk Oblast in average make about 31,000 rubles (€377), figures from the two regions’ statistical offices show.