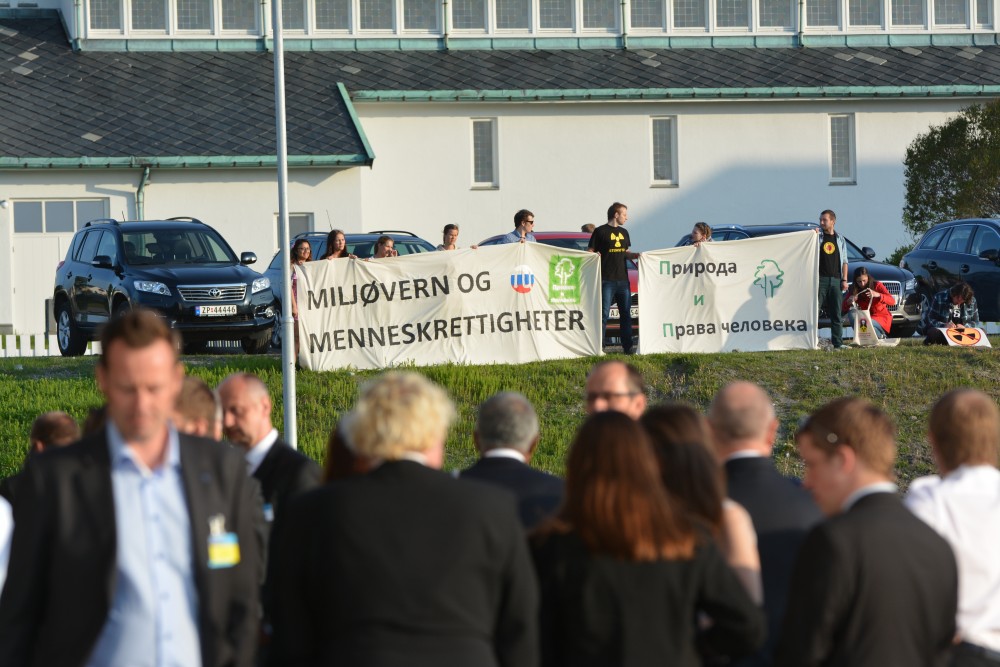 Russian NGOs organized this demonstration together with Norway's Nature and Youth at the Barents Summit in 2013. Photo: Thomas Nilsen

Russia´s Ministry of Justice is preparing changes in the Law on Foreign Agents to make it clearer what is meant by “political activity”.

The ministry has proposed to articulate seven forms of political activity of NGOs – participation in organizing and holding meetings, rallies, demonstrations, marches and pickets. Observation of elections is also to be regarded as political activity.

The Russian Law on Foreign Agents that requires on-profit organizations that receive foreign donations and engage in “political activity” to register as foreign agents came into force in 2012. The law has been criticized for being too vague about what is meant by “political activity” and to be designed to counter opposition groups.

According to the document prepared by the Ministry of Justice, NGOs (other than a political party) are considered participating in political activities in Russia, if it is involved in “activities in the field of nation-building and the foundations of the constitutional system of the Russian Federation, the federal structure, the sovereignty and territorial integrity of the Russian Federation”, TASS reports.

NGOs activities are also considered political is they are in the field of “the rule of law, public order, state and public security, national defense, foreign policy, social-economic and national development of the Russian Federation, the functioning of the political system, state authorities and local self-government, the legislative regulation of human rights and freedoms, and if the activity is carried out “in order to influence the development and implementation of public policy on the formation of government bodies, local self-government, their decisions and actions.”

The document continues to describe in which forms the activities are carried out. These include participation in organizing and holding public events like meetings, rallies, demonstrations, marches or picketing or various combinations of these forms, the organization and conduct of public discussions or performances.

In the Barents Region, seven groups have got the Foreign Agent stamp from the Ministry of Justice. In Murmansk that goes for the LGBT-friendly Maximum, the environmental group Bellona Murmansk and the Humanist Youth Movement. In Arkhangelsk this concerns the LGBT-friendly Rakurs organization and in Karelia the youth group Nuori Karjala.

In Petrozavodsk the group Northern Environmental Coalition is considered to be a foreign agent and in Nenets Autonomous Okrug Yasavey Manzara became the first Indigenous Peoples NGO to be stamped foreign agent.