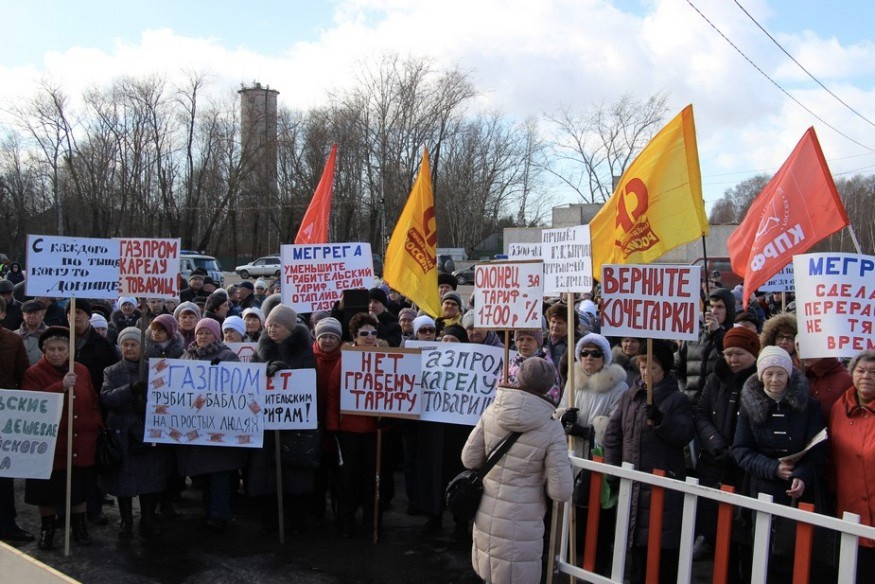 Locals in Olonets are frustrated about the high tariffs on heating. Photo: Gleb Yarovoy, Semnasem.ru

Several hundred people went to the streets in the small Karelian town of Olonets in a protest against mounting housing tariffs.
By

«We have one goal - to get the tariffs reduced», says Darya Ryappiyeva, one of the organizers of Sunday’s street protest in Olonets, a town of about 8,000 in the Republic of Karelia.

«We have made our step, now we await a response from the authorities», Ryappieva says to 7x7-journal.

More than ten people, among them local and regional politicians from the Just Party, Yabloko and the Communist Party, spoke at the rally which assembled several hundred people, 7x7-journal reports.

The protesters unanimously approved a resolution, which is to be published online and presented to the regional prosecutors, the government and other institutions.

«Lets see what comes out of it», Ryappieva says to 7x7-journal.

On the backdrop is a major hike in municipal tariffs on heating and other services. Many locals pay more than 8,000 rubles for the municipal services. For a retired person with a pension below 10,000 rubles, the situation becomes unbearable.

According to the event organizers, Olonets has the highest heating tariffs in the republic, almost twice the level of regional capital Petrozavodsk. Paradoxically, the tariffs skyrocketed after the town got connected with the regional gas pipeline grid in 2015. Natural gas replaced the old coal and wood boiler and was originally to make heating in the municipality far cheaper.