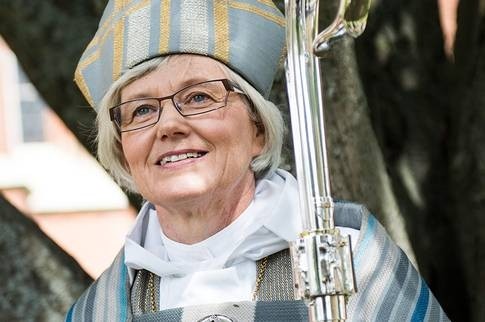 Antje Jackelén is the first female archbishop in the Church of Sweden. She was installed at the Uppsala Cathedral in Uppsala June 15, 2014.

Archbishop Antje Jackelén wants Sweden to set up an independent commission that will look into the state’s injustices against the country’s indigenous Sami people throughout history.
By

Jackelén argues that a so-called truth and reconciliation commission could give some vindication to Sami people who have been abused or discriminated against in the past and increase the understanding for Sami experiences.

The Sami are the country’s indigenous inhabitants, who hail from the far north of Sweden, Norway, Finland and Russia.

Jackelén writes on Dagens Nyheter that the Swedish Church, which used to run boarding schools for Sami people in the early 1900’s where students were forced to forgo aspects of their culture, is now trying to make amends for its wrong-doings against the Sami people in the past and that it is about time for the state to do the same.

“We have seen through our work that it is important that the state shares the burden of our colonial past, that it too takes responsibility for the injustices against the Sami people. That’s why we need an independent truth commission,” Jackelén tells Swedish Radio News.

Jackelén says that the commission would be tasked with going through and recounting abuse and injustices against Sami people and look at what role the Swedish Church played.

“This is a dark chapter in our history and that’s why it’s so important that we listen to their stories and work towards improved relations,” Jackelén says.

Ingrid Inga, a member of the Sami Parliament, thinks that a truth and reconciliation commission would be a good idea and points to Canada, where a similar commission was put together in 2009 to document the experiences of the country’s aboriginal population.

“We will work actively to convince the government that this kind of commission is needed,” Inga tells Swedish Radio’s local channel in Norrbotten in the north.

The Church of Sweden is currently working on its own “white book” about how the church treated the Sami people, which will be published later this month.