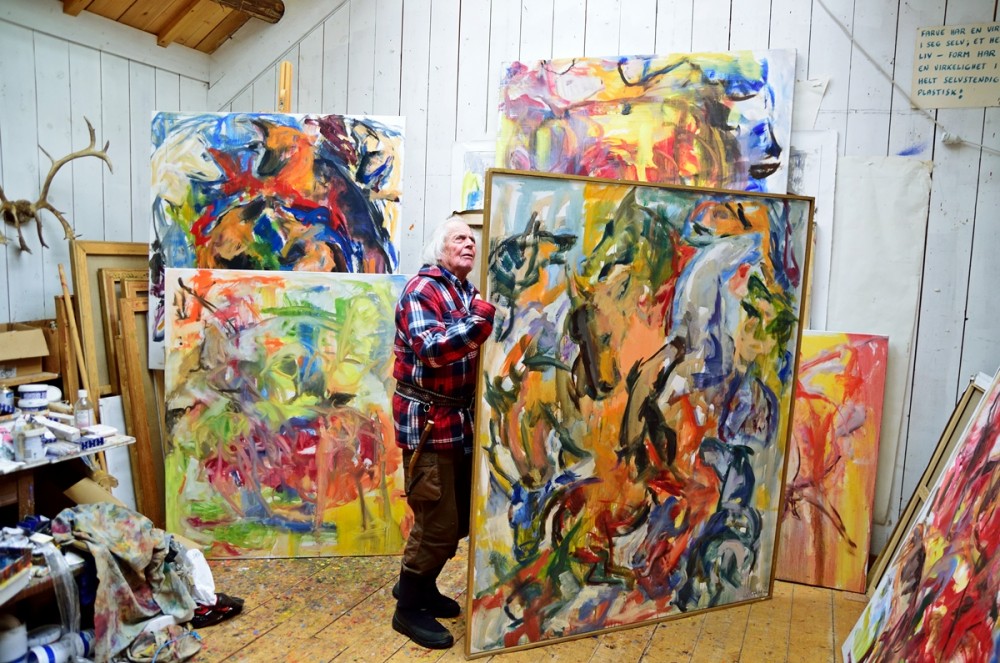 Artist Per Adde is at an age of 90 just as colourful as his paintings. Photo: Peder Lundkvist

One of the Barents Region's most famous painters turns 90. Meet the artist known for fighting the rights of Sami reindeer herders and the rights for rivers to flow free.
By

A wise and engaging teacher and a spot of red oil paint settled the matter.

Per Adde was lying in bed in his dorm in Gothenburg. In the darkness surrounding him, no possibilities to develop as an artist could be seen.

Then his teacher, the Danish artist Børge Hovedskou came in through the door and asked how he was.

“I said I didn’t want to paint anymore, pulled up my blanket and thought he soon would leave,” Per Adde tells.

But Børge Hovedskou, the founder of what today is known as Gothenburg School of Art, had seen the young man’s potential, and did what had to be done. He placed a canvas on the easel, painted a spot with red oil paint, and left the room with the words “If you are an artist, you will not be able to lay there and look at the red spot, you will have to get up and put another color next to it.”

“I remained in bed looking at that red spot. In the end I saw that it needed more. So I got up and started painting,” Per Adde says.

Since then he has painted, but also lived for long periods under scarce and hard conditions. He has stood on the barricades, including in Alta, where he after three years of struggle for nature and the right of the Sami people, was taken away by the police. But he continued to fight for the nature, the Sami and the art.

Now, as he just turned 90 years, Per Adde prefers to any stay at home by the Erik Larsa pond and paint. More free and more bold than ever.

Per Adde’s 90th birthday was celebrated in mid-april, in the gallery in Storjord, with a Sami feast, a concert and vernissage, and a few hundred guests.

21 paintings, all painted after his 89th birthday, right now fill up both the showroom where the gallery usually displays the permanent exhibition, and the guest gallery.

Adde Zetterqvist Art Gallery opened in 2013. The shape of the gallery resembles a canoe, and symbolizes Per Adde’s journey through Sweden, from Gothenburg and north, towards the mountains.

In his luggage he had oatmeal, crispbread a padded sleeping bag and a roll of canvas. It was an adventurous journey, which was followed by several eventful years in the Arjeplog mountains during the 1950s.

“The memories from that time are strong,” he says.

During those years Per Adde came in close contact with the Sami people who lived in the mountains, and got an understanding and deep respect for their way of life.

Graddis in the Swedish-Norwegian border mountains

In 1961 he began to build the home, which today consists of seven houses, off the beaten track, a few kilometers into the Norwegian side of the border. Only a single tree has been felled to make space for the buildings.

Here he and Kajsa Zetterqvist live close to each other and close to nature, not only as partners, but also as independent artists with a strong commitment to the development of art and culture, primarily in Northern Norway. They have also lived as activists, fighting, among other things, against the development of the Alta river.

“We travelled there, and the campaign lasted for three years. Together with fourteen thousand other people we blocked roads and demonstrated. But it happened as it happened, the police cleaned up and we were arrested and punished,” Per Adde says.

Back in Graddis again Per and Kajsa thought about taking it easy. But then came the plans for construction of a power plant in Saltfjellet, and Per Adde became the Sami people’s spokesman from 1982 and 1987.

“If they had been allowed to build five large power plants here, the reindeer husbandry would have been completely ruined and only a memory. I became a lobbyist, got little understanding from the municipality and the county, but when I came to Oslo, I got good contacts and more sympathy.”

After the five years Per Adde heard politicians in Stortinget suddenly using his words as they discussed the issue of Saltfjellet, and instead of constructing power plants in the area, they turned it into a national park.

“It was a full victory,” he says, smiling happily.

But new threats to both nature and the reindeer husbandry are constantly emerging. Among other things being discussed now, is a proposal to allow snowmobile traffic in the national park. Although Per Adde wants to devote himself fully to his painting, he now uses every opportunity and every meeting with decision makers to emphasize how important it is to respect and to allow for, reindeer herding.

We leave the discussions at the coffee table and the large open fireplace in the kitchen and walk into his studio. Here three artists, Per Adde, Kajsa Zetterqvist and Roland Peantze, meet in a conversation about how the experiences of the hand and the eye together find an expression where colors, shapes, movements and feelings unite.

“The eye is important, it is the eye’s development that decides if anything happens. The impulses between the hand and the eye control what happens,” Per Adde explains.

“One must learn to see”

“I have an idea that cannot be explained with words when I start painting. I cannot say how it will be, but I feel when it’s wrong, and I see when it’s right.” “Perhaps it is when you recognize something you have never seen or heard, that it is good,” Kajsa adds.

And Roland Pantze agrees. To answer questions about how and why you paint in a certain way, is difficult.

“it is difficult to know in advance what will happen and what it will become,” he says.

The conversation is also about experiencing nature, not just watching it.

“One must learn to see. When I see a tree, I don’t see just twigs and branches, I see gaps, shapes, movements, and how it looks in relation to its surroundings. I take all of this into my body and soul, and experience it,” Per Adde says.

Even Roland Pantze has exposed himself to trials where nature and weather have determined the terms and he has had to push his limits in order to survive. But in his art he depicts nature in a completely different way than Per Adde.

This article is a cooperation between the Swedish online newspaper Arjeplognytt and the Barents Observer.