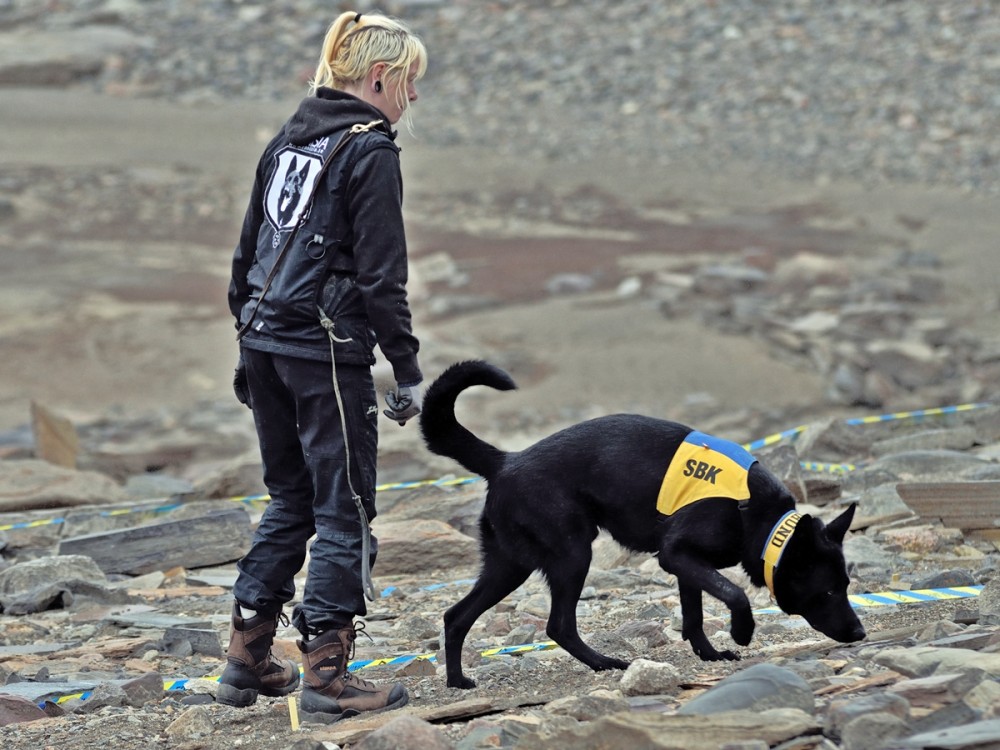 This summer the unique dog works at at the old mining settlement by the Silbojokk river in Nasafjäll in northern Sweden.
By

The dog Fabel, or Thunder Dust’s Quento, which is his pedigree name, is probably the world’s only scientifically tested archeology dog. With 94 percent certainty he can distinguish human bones from animal bones, and signal where old graves are located.

Together with his owner and mistress, Sophie Vallulv, he has visited Silbojokk ninety kilometres northwest of Arjeplog, to look for human remains in the form of skeletons at the old cemetery.

Here archaeologists fight an uneven battle against time and water to save as much as possible of an important part of Swedish history.

Where the mountain stream of Silbojokk flows into the lake Sädvajaure, a community was built during the 1600s, when silver mining in Nasafjäll started. Here you could find a melting hut, mill, sawmill, homes, church and cemetery. The community was destroyed after just 24 years, when a Norwegian-Danish army came and burned down the buildings. The old burial sites, and with them also the story of the people who lived and died here, are now about to run out into the lake.

The challenges faced by the archaeologists are many, and to make the work easier they have taken help of the archeology dog ​​Fabel. But even for Fabel the area at Silbojokk represents a great challenge.

“This is a place unlikeany other place we visited,” says Sophie Vallulv.

The melting hut was not rebuilt, but Silbojokk has its own parish, the parish priest still lived here, and church activities continued. The mountain population was to be become Christians, and church services were held in temporary premises until a new church was built.

The new church was burned in 1747, probably by the priest’s insane brother. After another thirty years church activities ended in Solbojokk.

Lake Sädvajaure has been regulated three times, most recently in the 1980s. Prior to the damming, which was 14 meters, an archaeological survey was made, but neither the church site nor any graves were found.

Only in 2002, a skull was found on the shore of Sädvajaure by a privat person, and then new archaeological investigations of Silbojokk began. However, they can only be carried out during a few weeks in early summer, before the water rise up over the area.

The findings at the burial site show that the mountain people have accepted to come to the church site and bury their dead here. But at the same time they have kept their old custom to send with the dead objects that were considered important, such as knives and fire steel.

Formally, the Historical Museum of Stockholm is the owner of the findings made at Silbojokk. In one of the museum’s exhibitions on people, events and objects that have shaped and influenced developments in Sweden during the last thousand years, Nasafjäll and Silbojokk, and the great hope that was placed on the silver mine in the far north, are presented. The story is about a time when Sweden was a great power, the Thirty Years War was going on, colonization was extended and the meeting between the old Sami faith and the Christian faith. Here you can see, among other things, a drum hammer, found in a dunghill at Silbojokk. This type of hammer was used by Sami noaidi, but how and why it ended up in the dunghill is unclear.

The findings of burnt bones made at Silbojokk have raised new questions. What is known today is that the burning site was in use for 130 years, and that two church buildings burned down here. But the question is whether the bones were burnt  during the church fires, or if they come from even older graves.

“During the Iron Age they burnt corpses, and we will try to date the bones to find out how old they are,” archaeologist Åsa Lindgren says.

Archive research done by technology historian Kenneth Awebro show that 160 named individuals were buried here during the 1600s and 1700s. Archaeologists at the Museum of Norrbotten have on several occasions applied for funding to do excavations and save what can be saved of the things still remaining.

Erosion makes skeletal parts and objects move from their original locations and eventually wash into the lake.

To locate the graves and delimit the survey area, archeology dog ​​Fabel and Sophie Vallulv were hired.

Fabel is a black German shepherd, he is 3 years old and specially trained to find human skeletons. A year ago he was tested both in a laboratory and out in the field, and the results showed that he can distinguish between human and animal bones with a detection rate of 94.2 percent. He is Sweden’s, and most likely also the world’s first and so far only, scientifically tested archeology dog.

Sophie Vallulv came up with the idea for this search method during her own training to become an archaeologist.

“It is difficult to find skeletons under the ground, and there are no good technical methods or equipment to do it without digging. But we know that there are many specialized search dogs, and it’s probably just our imagination that limits what the dog’s nose and sense of smell can be used for.”

Training started when Fabel was only five months old. It has always been based on rewarding the right behavior, it started indoors and then moved outdoors, with more and more interference.

Schaefer best “worker” there is

How much time Sophie Vallulv has put down on training with Fabel, she does not know.

“No, I don’t even dare to think about it. But I see it as combining business with pleasure,” she says.

The choice of breed was simple. Schaefer has always been, and still is, Sophie’s dream dog breed, not least because of its high desire to work.

“I like the pace and the willingness to work. There is a reason why just the German shepherd is a common service dog,” she says.

Sophie Vallulv is happy to tell about how she trained Fabel, but underlines the need for responsibility and respect when working with human remains.

“This is nothing you do for fun, we are not just out looking for bones, we are actually looking for someone’s family member, even if it is very old bones.”

During real searches Fabel has found bones that turned out to be 1600 years old. The maximum depth he signalled on is 1.5 meters. But that does not mean that this is the limit of what he can handle.

“No, it just means that my husband does not want to dig deeper test pits than a meter and a half,” she says, laughing.

When Fabel finds the scent of bones in the ground he turns to Sophie, looking for eye contact, dig a little with one front paw and sits down waiting for his reward - a moment of tugging and playing with his favorite toy, a green ball attached to a rope. After a few minutes he is ready to start working again.

A round of searching usually lasts about twenty minutes, and then he needs a short rest before he can continue.

At Silbojokk Fabel signalled in many different places. But before these sites have been studied in detail, it is difficult to know if there really are bones right there, or if he marks a place where there have been bones that have recently been moved because of erosion.

“We do not know how the water has spread the scents and moved the bones, or how much scent that remains in the ground where a bone has been laying for a long time,” says Sophie Vallulv.

In of the places Fabel marked out in front of an audience, in connection with the Silver Road Magazine’s guided tour of Silbojokk, Osteologist Ylva Backstrom makes an immediate finding. A finding of wood fragments. Perhaps from a coffin. Perhaps the remains of a skeleton are hiding a little further down.

Archaeologist Åsa Lindgren is equally happy about the areas where Fabel did not mark anything.

“He clearly showed that the area north of what we believe is the church site was not interesting, and it feels good to be able to make that delineation,” she says.

This year’s field work at Silbojokk is ending in a few days. The water in Sädvajaure is rising and will soon cover the old graveyard. The archaeologists still have a lot to do here. But that has to wait.

Hopefully they can come back again next year.

Fabel and Sophie have gone home to Växsjö again, awaiting new assignments in Sweden or abroad.

This article is a cooperation between the Swedish online newspaper Arjeplognytt and the Barents Observer.