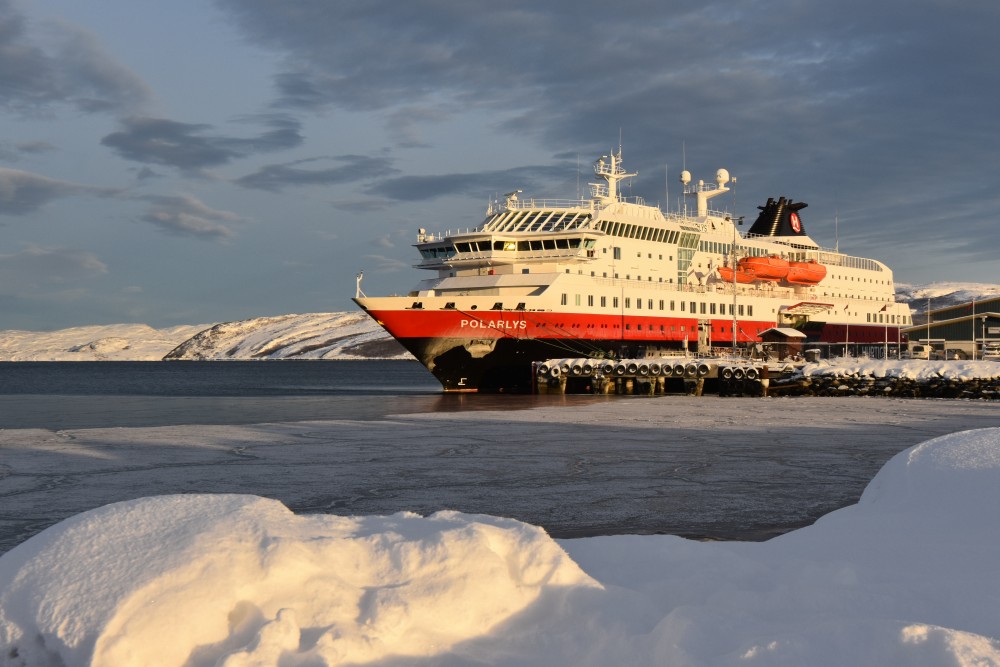 Starting in Norway, the voyages to Franz Josef Land have to make port calls in Murmansk both in and out of Russian waters.
Read in Russian | Читать по-русски
By

Hurtigruten’s new itinerary for the 2019-season includes an archipelago few others have ever been able to sail. Franz Josef Land is inhabited by only polar bears, walrus, seals and some few Russian military personnel. The 191 islands stretching from 80° to 82° North are surrounded by icy waters most of the year. This is even further north than Svalbard in the Norwegian Arctic.

With glacier covered rocks and mountaintops in the very northeastern corner of the Barents Sea, Franz Josef Land has been one of the most difficult  places on planet earth to visit. Not so any more.

For the passengers, landings can only be done with Zodiacs as no ports and little infrastructure is available at the previously unattainable, uninhabited polar archipelago. Except of a newly re-established military base on Aleksandra Island and a few weather and Arctic research stations, there are little chances that you will run into other humans when sailing along the ice-edge around Franz Josef Land

Today, Poseidon Expeditions is the only foreign cruise-liner to sail to the archipelago, but from 2019 others are lining up, including Hurtigruten in 2019 and Aurora Expedition in 2020.

But unlike Poseidon, Hurtigruten is not allowed to sail directly to Franz Josef Land. The two itineraries for 2019 include immigration control in Murmansk. Both in and out of Russian waters. While Poseidon sails directly from Longyearbyen, allowing for 8 days in the waters around Franz Josef Land, Hurtigruten can offer only five days at the archipelago out of the 15-days voyage.

From Tromsø, the voyage makes only one stopover en route to Murmansk, that is Sørøya near North Cape, and at world’s northernmost fishing village Skarsvåg on the return.

Russia has invested millions in new harbor facilities for cruise vessels in Murmansk. Last year, however, very few foreign passenger ships made port call, despite Murmansk being added to the list of ports in Russia where foreigners can enter for 72-hours without holding a visa.

Requesting foreign cruise ships eager to bring well-paying passengers to Franz Josef Land to sail via Murmansk is one way to boost traffic at to the new prestigious port facilities.

Last year, Murmansk Vice-Governor Alexey Tyukavin told the Barents Observer about the ongoing talks with Norway to bring Hurtigruten to Murmansk. He then admitted that Longyearbyen better suits cruise liners sailing to Franz Josef Land. «We have a long-lasting cooperation with Poseidon. They are specializing on foreign tourists and with Franz Josef Land now open for foreign passenger ships it is more comfortable and practical to sail from Svalbard. Cruises should not last longer than two weeks and Murmansk is then too far away,» Tyukavin said.

«We are looking into possible future voyages from Murmansk to Svalbard and Franz Josef Land. The big problem today is Russia’s lack of own passenger vessels,» the Vice-Governor explained.

Rune Thomas Ege is VP Global Communication with Hurtigruten. He says it is difficult to obtain permissions to sail directly to Franz Josef Land from Svalbard.

«We have a good and ongoing dialogue with Russian authorities over time. It’s always challenging to start voyages to areas where few others go, and Russia is special in many ways,» Ege says to the Barents Observer.

«We perceive that Russian authorities do understand our challenges and what it takes to start such voyages,» he says.

For now, two voyages are announced for August/September 2019. Both on board the «MS Spitsbergen» - a vessel that takes up to 243 passengers. Prices for the voyage starts from €5,600. That is more than €2,000 less than starting prices with Poseidon Expedition’s voyages to Franz Josef Land from Svalbard.

Hurtigruten, Poseidon Expeditions and Aurora Expeditions will likely be joined by many other cruise liners currently knocking on Russia’s Arctic door.

Last week, Scenic announced it will build a second ice-classed luxury expedition yacht with a capacity of 200 passengers for Arctic cruises. To be launched in 2020, the ship will sail the White Sea, the Bering Sea and Russian Arctic. Other cruise liners soon to launch ice-classed vessels include Ponant, SunStone Ships, Crystal Cruises, Oceanwide Expeditions and Lindblad Expeditions.

Hurtigruten is today the largest cruise liner operating the Arctic with expedition vessels sailing the waters off Svalbard, Greenland and Iceland in addition to year-around daily voyages along the coast of northern Norway all the way to Kirkenes near the Russian border.