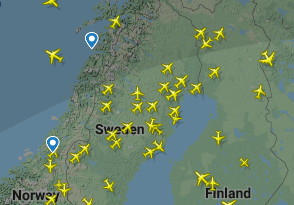 Thousands of passengers on their way to Lapland Sunday morning. Screenshot from Flightradar24.com

About 95 charter planes bring Europeans to Finnish Lapland on Sunday, one of the busiest days in aviation history of northern Scandinavia.
Read in Russian | Читать по-русски
By

Snow is finally covering the surroundings of Santa Claus’ theme park in Rovaniemi, northern Finland. Just in time before the huge crowd of families from Europe and Asia land at the airport on the Arctic Circle.

This Christmas season is the busiest ever for Lapland tourism. And this Sunday is all-time peak with about 95 charter flights coming in from Europe, Swedish Aviation Authority reports. Most flights cross over northern Sweden en route to Lapland.

Dozens of the planes are from the United Kingdom, but also flights from Germany and France are numerous.

The four airports in northern Finland are Rovaniemi, Kittilä, Enontekiö and Ivalo.

Broadcaster YLE in Rovaniemi reports that Arctic safari companies are relieved snow now paints the nature Christmas white. It started to snow on Tuesday after the warmest autumn in times of measuring temperatures in the Arctic Circle region of Scandinavia.

A worry, though, is unsafe ice on the lakes.

As previously reported by the Barents Observer, 677 charter flights will arrive to Lapland this Christmas season. If including Kuusamo airport further south, the number is 713 YLE reports.

Additionally are thousands of passengers arriving up north with ordinary scheduled flights from Helsinki, including the numerous tourist groups flying in with Finnair from Asia.

«The winter season is expected to grow about 5-10%,» says Sanna Kärkkäinen, CEO of Visit Rovaniemi to the Barents Observer.

Swedish Aviation Authority says similar busy day like Sunday December 9th is expected on December 23rd, a day before Santa Claus himself takes to the skies.

Moomin snowcastle to be erected in Rovaniemi