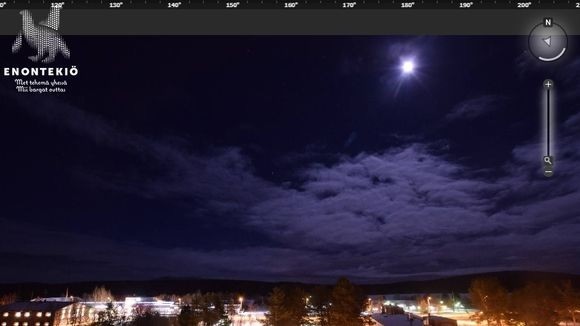 The purpose is to show the world that the polar night is not dark, but actually full of colors, says the local project coordinator.
Read in Russian | Читать по-русски

You can now follow the polar night in Enontekiö, Finnish Lapland, through an online camera. Kaamoskamera – Polar Night Live can be watched in real time 24 hours a day, from dawn to the night with its stars and aurora borealis.

The goal of the camera is to show the world that the polar night is not dark, but actually full of colors, says Culture and Communications Coordinator Heli Nurmi from the municipality of Enontekiö.

«Down south, people believe that it’s pitch dark here during the polar night. But we, of course, know that it’s incredibly beautiful here during this season. The polar night camera is a way of showing that Enontekiö is a beautiful place and a good place to live in. The purpose is to make Enontekiö known both as a town where people live and as a destination for tourism,» Nurmi says.

Hope to make the camera known all around the world

The polar night camera shows a scenery of the village of Hetta, with the fell Pyhäkero and Lake Ounasjärvi in the background. People have been able to follow life in the village and the colors of the polar night on the Internet since late November. In mid-December, the camera had had more than 20,000 viewer visits.

The idea is to have the online broadcast available for the public at least until the sun rises again in mid-January.

Though the inhabitants of Enontekiö do not need to check the online camera if they want to see the colors of the season, the municipality has received a great deal of posivite feedback from the people living in the area. However, the goal is to make the polar night camera known all around the world.

«We have launched a big campaign in order to tell about our online camera more widely. It will be interesting to see how the viewer figures will develop during our campaign,» says Heli Nurmi from the municipality of Enontekiö.

The polar night camera set up by Enontekiö is just a pilot project. After the polar night, the municipality will weigh the future of the online camera.

«Of course, we are discussing whether we could also broadcast a live video during other seasons. One possibility would be running the camera in summer, the season of the midnight sun,» Heli Nurmi explains.