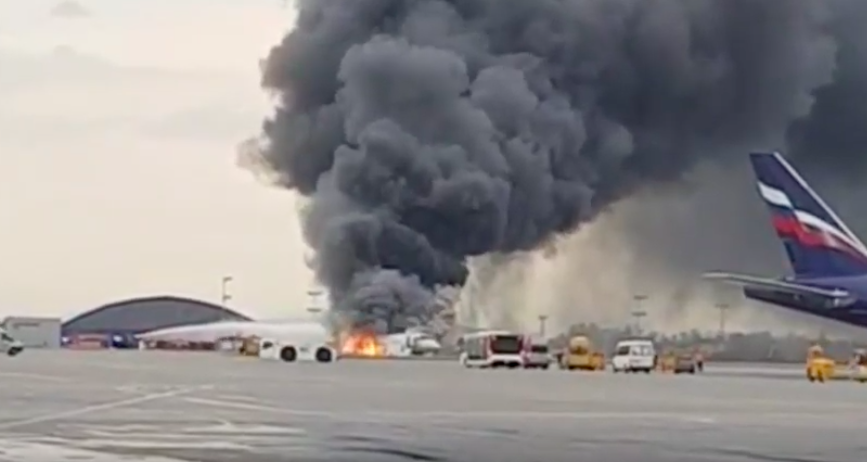 37 of the 78 people onboard survived, investigation committee says.
Read in Russian | Читать по-русски
By

Aeroflot’s flight SU1492 took off from Sheremetevo airport in Moscow at 18.03 local time on Sunday with 73 passengers and five crewmembers.

Tracking data from Flightradar24 shows how the plane, a Russian made Shukhoi Superjet-100, some 3-4 minutes after take-off makes a sharp turn east and flies another ten minutes before taking a 360 degrees circle northeast of the airport and starts approaching back towards the runway at Sheremetyevo, the largest of Moscow’s airports.

According to the play-back of the flightradar data, made by Bloger51 in Murmansk, the plane was in the air for 27 minutes.

Several dramatic videos posted on Instagram and YouTube show how the burning Aeroflot plane lands, then sliding sidways, before coming to a stop on the gras near the runway with its tail in a fire-ball.

Shortly after the plane stops, people start to jump out using the two front emergency slides. The entire tail was then in blaze and black smoke billowed from the plane.

One video, taken by a passenger and posted by Severpost, shows several passengers carrying their luggage as they run away from the burning plane.

In Murmansk, where the plane was scheduled to land around 8 pm, authorities have establish an emergency team at Murmashi airport with psychologists, news agency TASS report.

Citing crewmembers, TASS reports that the fire started when lightning struck the airplane. The news agency, quoting a source in the emergency services, reports about 13 people killed and some five to 10 people injured. There could be many more. Interfax, quoting the head of the investiation committee, reports that 37 of the 78 people onboard survived.

Aeroflot writes on its portal that the plane had to return to Sheremetyevo due to technical reasons and suffered an engine fire upon landing.

“Aeroflot extends its deepest condolences to the family and loved ones of those who lost their lives on flight SU1492 Moscow-Murmansk. The crew did everything in its power to save passenger lives and provide emergency assistance to those involved. Tragically, they were unable to save all of those aboard. Our thoughts and hearts are with those who have suffered an unspeakable loss. We mourn with you.”

Murmansk Governor Andrey Chibis writes in a tweet late Sunday night that he is shocked by the catastrophe at Sheremetyevo airport. “My deepest condolences to the families of the deceased passengers on the Moscow-Murmansk flight, hope for fast recovery of the victims.”

The plane, with registration number RA-89098, is only one year old. The flight to Murmansk was the third flight this plane made on Sunday, after first flying from Saransk in Mordovia to Moscow and then a return flight to Saratov.