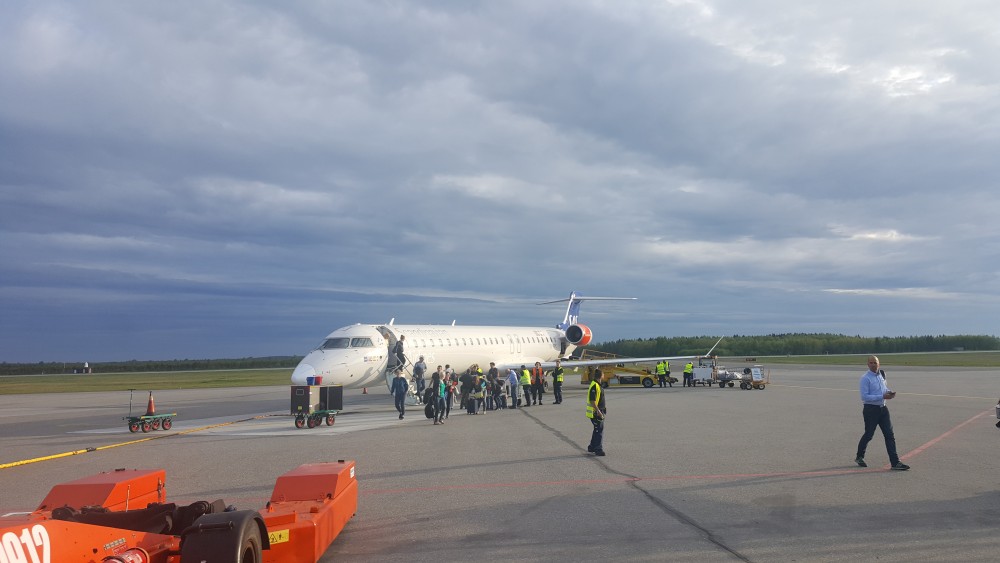 The number of passengers at Umeå airport was down 5% in 2019. Photo: Thomas Nilsen

With 2019 being the year when ‘Flight shame’ was introduced as a social movement aimed at boycotting air travel to reduce carbon emissions, the effect has clear impact on the number of passengers at airports in northern Sweden.

The Barents Observer has looked into the 2019-statistics of Swedavia, Avinor and Finavia, the national state-owned operators of airports in the three Scandinavian counties.

The two biggest airports in northern Sweden, Umeå and Luleå, saw a drop in passengers by 5% and 3%, respectively.

In Oulu, the busiest airport in northern Finland, the number of passengers was down 3,6% in 2019. Rovaniemi, though, had an increase by 2,6%, largely due to more charter planes with visitors to Santa Claus park and other winter tourism activities.

For northern Norway, the number of passengers continues to grow. Bodø had an increase of 2,6%, while Tromsø was up 1,3% last year.

Finland had the largest growth in air traffic with 4,2%, while Norway had a growth of 0,6%. Sweden, where the flight-shaming movement is strongest, had drop in air passengers by 8%. Especially domestic air traffic was down, with remarkable 12% while international traffic decreased by 5%.

That said, a big difference between the three Scandinavia countries is available alternatives to flying.

While Sweden has the Bothnia Line higher speed railway bringing passengers from Umeå to Stockholm in 5 hours 40 minutes, the fastest travel time with train from Bodø to Oslo is 18 hours 16 minutes.

Bodø and Fauske are the northernmost destinations on the Norwegian rail line network. If heading to Tromsø without flying, another 10 hours should be added, bringing the total travel time between Oslo and Tromsø up to 28 hours.

In number of passengers, Tromsø is by far the largest airport in northern Scandinavia with 2,37 million in 2019. Bodø is second on the list with 1,87 million. Umeå is busiest in northern Sweden with 960,000 and Oulu is largest in northern Finland with 1,05 million passengers.

The world’s northernmost airport with regular passenger flights, Longyearbyen on Svalbard, saw an increase in air passengers by 2,2% last year with a total of 185,449 travelers.