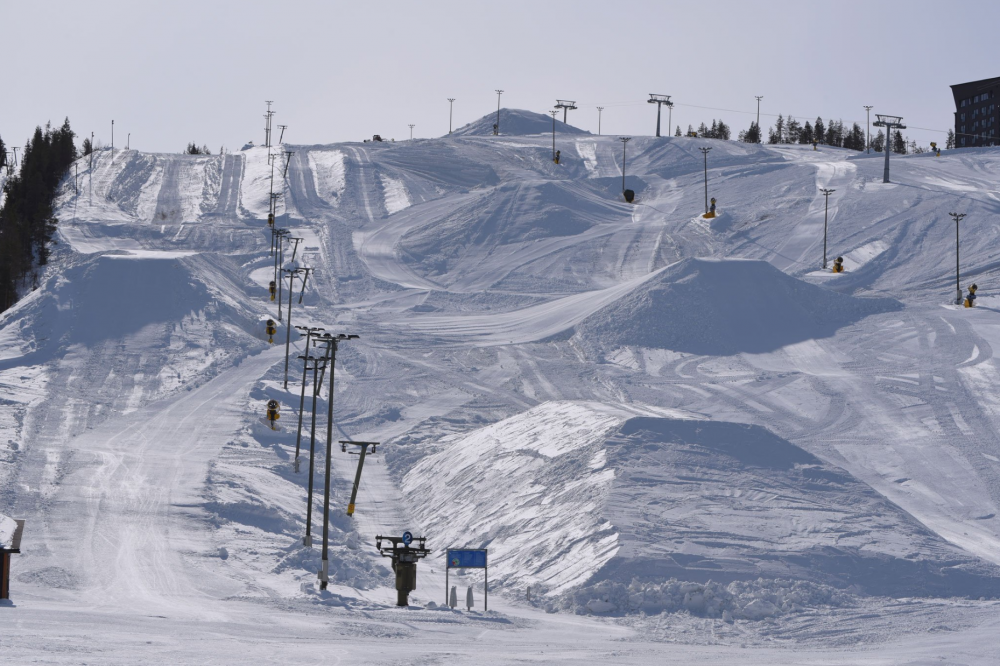 At the Levi front pistes, snowgroomers have collected huge piles of snow shaped to a certain form to be covered with three layers of geofabric hindering heat and sun to melt the snow during summer. Photo courtesy of Levi Ski Resort

About 150,000 m2 of snow will be preserved for next season with new cover techniques.
Read in Russian | Читать по-русски
By

Like all ski resorts in northern Finland, Levi had to shut down operations overnight at the peak of the season because of the coronavirus outbreak. The closure has a dramatic economic effect for multiple businesses, everything from hotels, restaurants, activity providers, not least to talk about the downhill slopes around the Levi mountain north of the Arctic Circle in Finnish Lapland.

Instead of only focusing on the bold red figures, the businesses at the ski resort are now looking beyond the devasting sudden end to this winter season.

Snow-groomers are currently working hard to collect the snow from the skiing slopes into several large snow-piles. The piles are then covered with 3 layers of so-called geofabric to avoid rain, wind, and sunlight to get in.

“Snow depots are staying under the covers until it is time to spread out snow back to the slopes for the new season-opening,” says Commercial Director with Levi Ski Resort, Marko Mustonen, to the Barents Observer.

He plans for a record early season opening already in October for the front slopes in the center of Levi.

“We are testing new Finnfoam isolation material, which is a high vapor resistant material. It should minimize evaporation of snow to 5-10%,” Mustonen explains.

Normally, the snow remains in the slopes until melting in early May, but because of the corona closure in late March, way more of this year’s snow can be collected and preserved.

The piles are shaped by diggers to a certain form optimized for the covers to prevent smelting in summer.

Additional to the huge piles at the front slopes, similar piles are made at the steep black slope on the west side of the Levi mountain, well known for the annual opening of the Alpine Skiing World Cup in late November.

Mustonen says the impact of the coronavirus, of course, is dramatic for the entire Levi destination.

“It came at the highest possible season. For us, as a ski resort, the loss will be around 25% of annual sales.”

He thinks the long-term impacts of the pandemic will change the world.

But, as Mustonen puts it: “We are positively looking forward.” First to the summer season if the corona situation allows it.

Then, towards a record early opening of next skiing season with preserved snow thanks to new Finnish cold-climate creative solutions.

“We believe people are eager to spend their time in outdoor activities like skiing, biking, hiking and breathing fresh Nordic air,” Marko Mustonen says with an optimistic voice.

In these unsettling times, the Barents Observer needs your support more than ever. If you like what we’re doing, please consider making a donation today! Your financial contributions, however big or small, will help keep our independent news coming from the north, about the north.