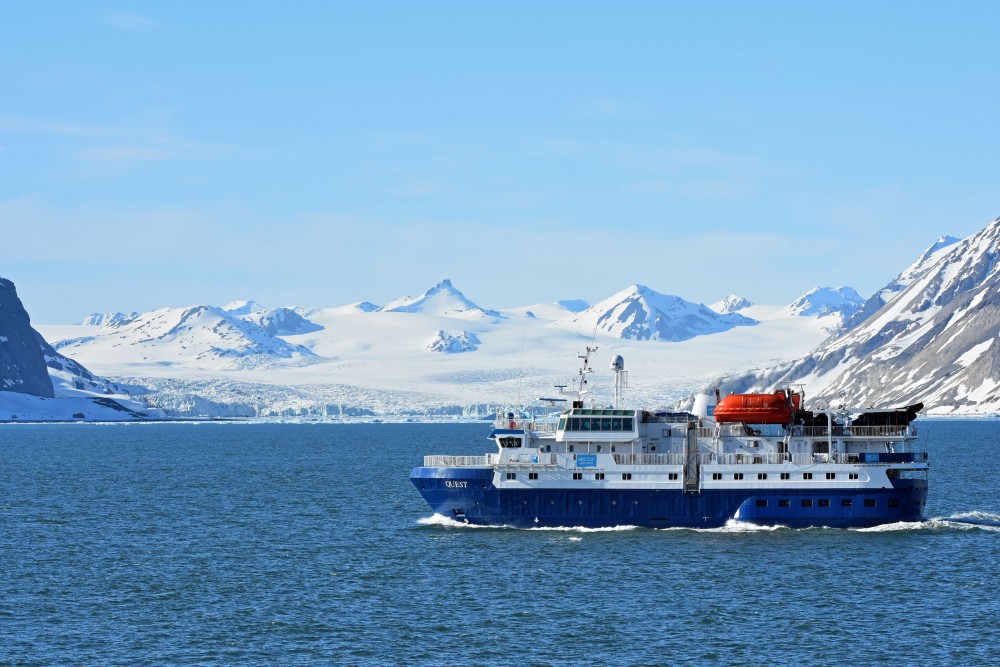 "We get port call cancellations to Longyearbyen every day now," says Assisting Harbor Master Rikhart Olsen Ingerø. Norway's ban on most international visitors is extended to August 20 and includes Svalbard.
Read in Russian | Читать по-русски
By

June to August 2020 was supposed to be an all-time-high for expedition cruising to Norway’s Svalbard archipelago, the busiest waters for upper-end tourism in the circumpolar Arctic.

More than 70 port calls by cruise ships were scheduled to Port Longyear for the six-weeks period from early June to mid-July. A few of the ships are seasonally based at Svalbard, while others are from overseas.

“For now, all port calls by larger cruise ships from overseas are cancelled throughout June, and we expect cancellations also for July and August,” says Rikhart Olsen Ingerø to the Barents Observer.

“We were expecting about 35 port calls by overseas cruise ships for the summer of 2020,” the Assisting Harbor Master tells.

“Many expedition cruise ships have also cancelled, but it looks like several of the cruise liners are waiting as long as possible with cancelling the tours.”

A review made by the Barents Observer among the main operators of expedition ships to Svalbard this season still gives the impression that many tours will sail as scheduled.

Hurtigruten, the largest of all expedition cruise operators in the Arctic, updated its portal on May 19 stating cancellation of its May 30th departure with “MS Spitsbergen” at Svalbard. Later tours for the season, however, are still not cancelled.

Hurtigruten has not replied to questions from the Barents Observer about the remaining Arctic sailing season.

On Monday, the Norwegian government announced a prolongation of the ban on most international visitors to August 20. This in order to prevent the spread of Covid-19.

Since Svalbard is a part of Norway, the same rules follow at the archipelago.

Also, most expedition ships sailing around Svalbard use Longyearbyen airport for embarking and disembarking passengers. Flights to- and from Longyearbyen go to airports on mainland Norway where foreign citizens without a working permit to Norway, or other special reason, will be turned around in the passport control.

The government says consideration will be given by June 15 on permitting leisure travelers from the Nordic countries to enter Norway. By July 20, permitting such entry from other nearby north European countries will also be considered.

Many passengers on the upper-end expedition ships, though, are citizens of countries like the USA, Canada, Australia, and the United Kingdom. Even if Norway’s border would open, passengers will have big challenges to join the ships as international air travel for the most is grounded.

Poseidon Expeditions, which sails the “Sea Spirit“ on voyages from Svalbard to Russia’s even further north remote Arctic archipelago of Franz Josef Land, says the travel restrictions to Norway will affect most of the scheduled departures.

“We are working to contact all passengers booked on these dates, in sequential order, to move their reservations to 2021,” says Poseidon spokesperson Steve Wellmeier to the Barents Observer.

He underlines that this is a very unfortunate situation not only for Poseidon but for all expedition operators relying on the summer season in Svalbard, Franz Josef Land and the Russian Far East.

“Naturally, the ground agents, suppliers, ship handlers, excursion operators and suppliers who support the cruise industry in Svalbard, Murmansk, and other destinations are also suffering as a result,” Wellmeier says.

On the revenue side, Wellmeier says Poseidon naturally is losing most of the 2020 summer season’s project revenue, which it will not get back. But, as he says, “the postponement of cruises from 2020 to 2021 is sitting well with 90% of the passengers with reservations or with the travel agents who handled the booking.”

“This makes achieving our sales goal for summer 2021 easier,” Steve Wellmeier says with an optimistic voice.

The global travel market’s longterm interest for Arctic cruises is not decreasing because of the coronavirus outbreak.

Starting June 1, Norwegians will be allowed to go to Svalbard, but they count for a limited number of cruise ships’ passengers.

For businesses in Longyearbyen, whose economy for a large depends on tourism, 2020 has turned from starting off as the most promising year to a near-total collapse.

With Norwegians leisure travelers allowed to visit from June 1, the Governor of Svalbard has drawn up a draft guideline on how to prevent the virus infection from spreading.

“The guideline draft is based on the national infection prevention advices and the applicable law and regulations, says Governor Kjerstin Askholt.

“For the tourism industry, however, there will not be a full opening when a date is set for travellers to visit Svalbard again, but a reduced offer compared to earlier. We are talking about approaching a new normality,” says the Governor.

PolarQuest, a Swedish-based travel company operating smaller cruise vessels in the waters around Svalbard, says it is forced to cancel many of the expedition cruises in Svalbard because of advised against non-essential travels to all countries.

“It saddens our polar hearts that we have to cancel the adventures our travellers have saved up for and looked forward to for so long,” a statement from PolarQuest says.

Also, Norwegian government officials are concerned about the Covid-19 impacts on Svalbard tourism.

“The community in Longyearbyen has been significantly affected by the economic consequences of the pandemic. It is appropriate that we enable the travel and leisure industry in Svalbard to resume activity at the same time as official recommendations for leisure travel on the mainland are revised,” Minister of Justice and Public Security, Monica Mæland, said at a press conference in Oslo on Monday.

For the cruise industry, though, Svalbard 2020 might already be a closed chapter.