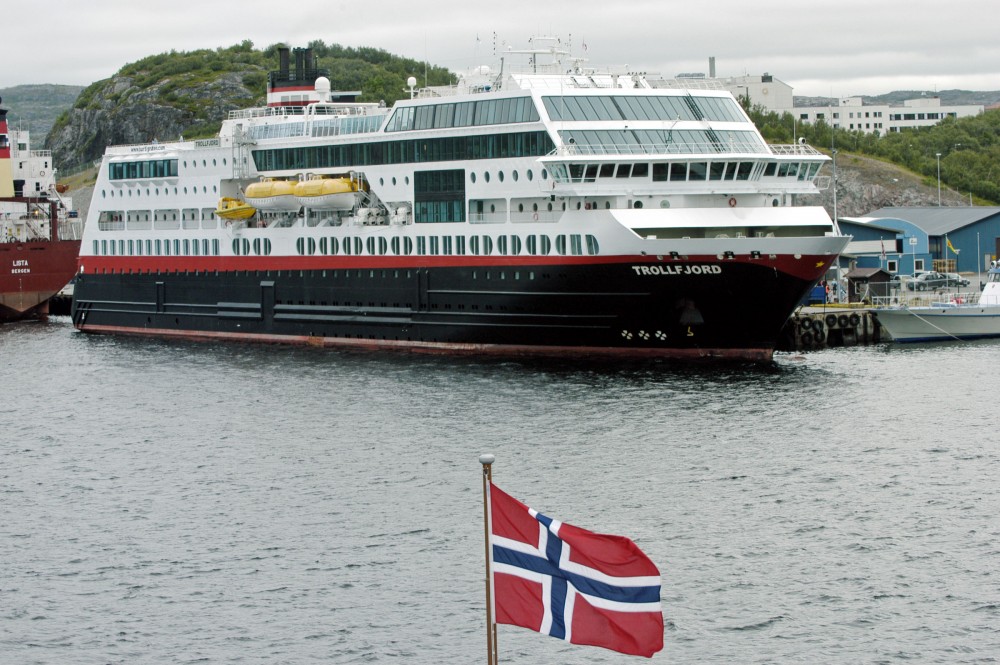 "MS Trollfjord" will continue to sail from Bergen, but no longer to the port of Kirkenes, as Honningsvåg (North Cape) will be the turn-around port. Photo: Thomas Nilsen

With about 20% market share, Hurtigruten is already the largest among expedition cruise operators in northern waters. From January 2021, three of the vessels  will be dedicated to sail year-round departures to northern Norway from Dover, Hamburg and Bergen.

The three vessels are the largest in the fleet and two of them will be renamed to fit Hurtigruten’s Arctic expedition cruise-image.

“We have seen an increasing demand for closer-to-home departures. We expect this to further increase in the wake of COVID-19. To give our guests even more flexibility, we have decided to expand our offering with year-round expedition cruise programs from both UK, Germany and Norway,” Hurtigruten CEO Daniel Skjeldam says.

“Otto Sverdrup” will sail out of Hamburg on two different summer and winter itineraries to the North Cape and back.

“Maud” will take guests during winter sail from Dover to the North Cape with a maximum time above the Arctic Circle in hope for the passengers to see the Northern Lights. During summer, the ship will offer two routes; one around the British Isles, the other to fjords in Southern Scandinavia.

“Trollfjord” will sail out of Bergen to the North Cape and back, including beauty-spots in the North like Reine in Lofoten and Træna on the coast of Helgeland.

Why Hurtigruten has chosen to brand the voyages as expedition cruises will likely be questioned. In the global cruise market, expeditions are small ships, generally in the 100 to 200-guest range, taking passengers to destinations bigger ships can’t get to.

The three ships on Hurtigruten’s new routes are in the 500-guest size.

Hurtigruten says the ships are well suited for expeditions along the coast of Norway.

“The internationally widely recognized guest number standard for expedition cruising, both in Arctic and Antarctic waters, is about 500 guests. These new Hurtigruten sailings also offer expedition teams and focus sharply on educational, authentic, nature-based experiences. We are proud to brand these voyages as what they truly are, expedition cruises. We are looking very much forward to taking guests to unique places – and to use our custom-made explorer boats to offer remote landings in pristine nature,” says press officer Øystein Knoph in Hurtigruten.

Hurtigruten started in 1893 to operate the coastal service along the coast of Norway, a state subsidized business still a big part of the cruise liner’s operations with year-round daily departures between Bergen and Kirkenes, calling at 34 ports.

Starting in 2021, the Norwegian government has decided to split the coastal voyages, subsidized by the state with 788 million kroner (about $76 million), in two between the established Hurtigruten and the newcomer Havila. For Hurtigruten, that means it no longer has to keep 11 ships in the fleet for the daily route Bergen to Kirkenes.

By taking the three largest vessels over to the new commercial expedition cruise itineraries, not carrying local passengers and not sailing east of North Cape, Hurtigruten will grab a big share of the international passenger market from the traditional Bergen to Kirkenes coastal voyages.

Prices, though, are much higher on the new expedition itineraries. A May 2021 departure from Bergen to North Cape and back costs from 34,990 kroner ($3,400) per person, according to Hurtigruten’s booking site. This is 13,000 kroner ($1,200) more than the traditional Bergen-Kirkenes and return voyage for the same dates next year.

Previously, Hurtigruten had plans for sailing voyages to Russia’s northwestern waters with destinations like Murmansk and the Solovki archipelago in the White Sea.

Last summer, a big blow came to the plans as two long-time promoted voyages to the Arctic archipelago of Franz Josef Land, via the port of Murmansk, were cancelled in last minute.

“Despite the fact that “MS Spitsbergen” meets the requirements of the Polar Code, and has permissions to sail in these areas of the Arctic, Russian authorities in the last minute unexpectedly denied us,” Head of Communications in Hurtigruten, Anne Marit Bjørnflaten, said to the Barents Observer.

Today, no Franz Josef Land voyages for 2021 are listed on Hurtigruten’s 2021 program. The cruise liner has not replyed to questions from the Barents Observer about any furture plans for sailings to Murmansk or the White Sea.