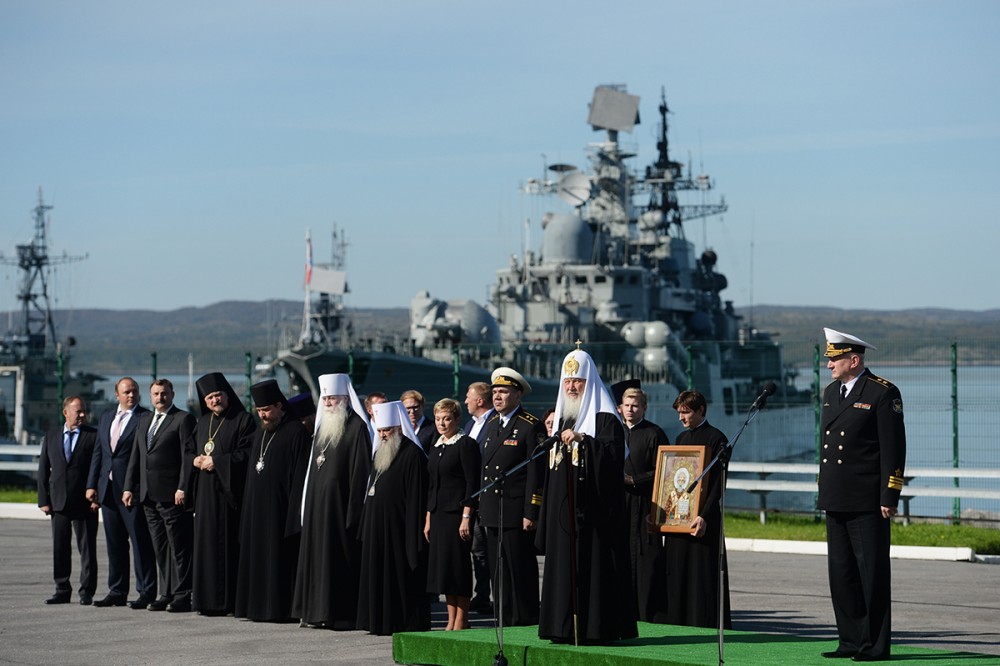 Full combat readiness comes only with divine force and a devout spirit, the church leader tells young Northern Fleet officers as he pays visit to Russia’s most potent Navy town.
By

During his visit to Severomorsk last week, Patriarch Kirill highlighted the importance of the North for contemporary Russia. With this region we pin a big part of our future, the prelate said. «Not only are these prospective lands, they are also very important for Russia’s military defence, its economic development and transportation».

«Your presence along these shores provides us with true peace and security for the nation», Kirill said in an address to Navy officers and added that Russia’s Armed Forces also in peace time must be in a state of combat readiness.

«And not only technically, not only in terms of military skills — the protectors of the Motherland must also be strong in spirit», he underlined, a transcript published on the Church homepage reads.

Fleet Commander Nikolay Yevmenov showed the Patriarch around in town and brought him onboard missile cruiser «Pyotr Velikii», the country’s Navy flagship. Behind followed the rest of the regional top brass, among them Murmansk Governor Marina Kovtun, Metropolitan Simon and Phosagro leader Andrey Guriev.

There, the Patriarch witnessed the power of the Kirov-class battlecruiser, which is armed with range of lethal weaponry, among them the P-700 Granit anti-ship missiles, the Kinzhal surface-to-air missiles and S-300FM missiles.

Along the town waterside were lined up hundreds of sailors in parade uniforms. Present were also the local Yunarmiya, the Army unit of kids and youth from Severomorsk.

The visit coincided with the 25-year anniversary of the 1991 failed coup against Mikhail Gorbachev, and Patriarch Kirill used the opportunity to warn Northern Fleet soldiers against what he sees as fatale policies of that time.

«We know from our history that there was a period when a great country fell apart without a single shot, without the launch of one single missile, despite the high level of defense capability. We must never again allow anything similar to happen.»

The Church can offer the recipe against such developments, Kirill hinted.

«How to keep calm in a moment of lethal danger, confidence in the rightfulness of one’s actions, capacity of fulfilling orders, the capability to proceed and not retreat? These are all questions of spiritual character», the prelate underlined.

During his visit to the Kola Peninsula, Patriarch Kirill also went to Pechenga where he sanctified the new Saint Trifon monastery. In addition, he laid down the foundation stone for the new Murmansk cathedral, a 51 meter high church building which has been under planning for more than a decade.

He also paid a visit to Kirovsk, the regional mining town where he along with Phosagro leader Andrey Guriev descended into one of the major underground apatite mines. Thereafter, he proceeded his northern tour with a visit to Solovki, the archipelago in the White Sea.