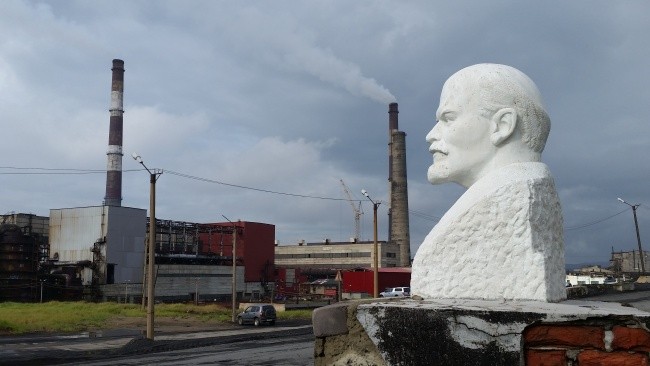 Lenin overlooking the smelter in Nikel while Norilsk-Nickel's private owners can smile all the way to the bank. Photo: Thomas Nilsen

Largest taxpayer on the Kola Peninsula makes big money, despite Russia’s economy just marked one and a half year of recession.
By

While low oil prices and economic sanctions have hit the Russian economy hard, Norilsk-Nickel on Monday posted a 1H2016 profit of $1,3 billion.

Although down 13 percent year-on-year, the result is still very good. For Murmansk economy, Norilsk-Nickel’s huge profit is most welcomed. Not only is the company’s Kola GMK division one of the largest businesses in the region with thousands of employees, but the metallurgical and mining giant is also a major taxpayer.

Metal prices were lower during the first half-year with earnings before interest and taxation down 34 percent year-on-year, but Norilsk-Nickel still gains for having most of its expenses, like salaries, in rubels and income in dollars.

In the Murmansk region, Norilsk-Nickel has mines and a pellets plant in Zapolyarny, a smelter in Nikel and smelter and processing plants in Monchegorsk. The company has its own shipping port in Murmansk.

After diving to half of its earlier value in 2013/2014, the rubel has gained more than 13 percent against the doller so far this year. Moscow stock index is up 50 percent since the low hit two years ago after Russia’s annexation of Crimea and the following sanctions.

The country’s economy shrank by 1.2 percent the first quarter 2016 and inflation is high. Russian economy has been in recession for the last 18 months. How to deal with the economic crisis is a main question for the parliamentary election next month.