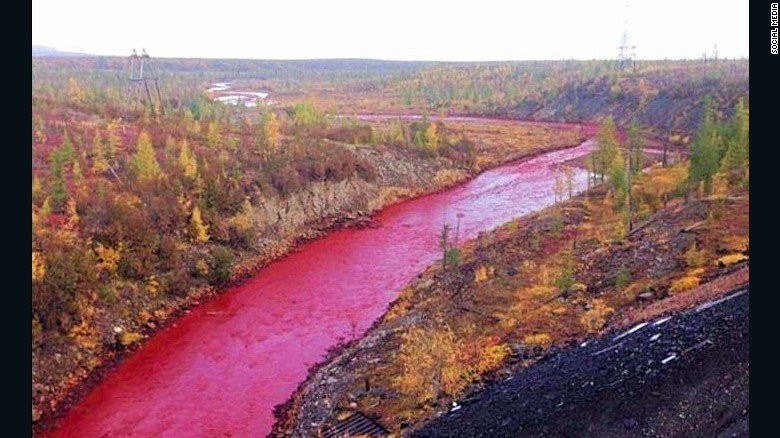 «Abnormal rains became the reason for Daldykan River Case,» reads the headline in a press-release sent out by Norilsk-Nickel on Monday, nearly a week after the first social media photos of the blood-red river started to appear.
By

That could have been a plausible explanation. Wasn’t it for Russia’s weather forecast service’s diary, telling that there were no rain in Norilsk on the day when the the leak happened. Not the day before either. Actually no rain were recorded at all that week, GisMeto’s overview reads.

The red-polluted river on the Siberian tundra outside Norilsk has made world-wide headlines.

In its press-release, Norilsk-Nickel says the «short-term river color staining with iron salts presents no hazards for people and river fauna.» The company, however, assures it will «put the most efforts to avoid such incidents in future.»

Based on an investigation into the leak, Norilsk-Nickel explains how the pollution came to the river from a tailings dam at its Nadezhda Metallurgical Plant. «On the 5th of September after abnormal heavy rain the overflow of one of the dikes occurred, and water entered Daldykan river.» The company says the area received approximately 50 percent of monthly average precipitation in rainfall in the course of 24 hours.

GisMeto’s diary says there were no rain, partly cloudy all day long on September 5th. Like it was the day before that as well.

The conflicted information is not the first in this case from Norilsk-Nickel.

First, the company denied any claims about pollution. A press-note posted on September 8th at the company’s portal reads: «The waters show the natural tone; the river and its mainstream are in regular condition, which goes against the information about any color changes due to an alleged case of large-scale river pollution.» The text is flavored with photos of the river, though at a totally different location, showing no red-colors in the water.

Norilsk is by far the most polluted place in the Circumpolar Arctic. Heavy air-pollution has damaged the nature on huge areas on the Taimyr Peninsula. Norilsk-Nickel’s subsidiary Kola GMK has for decades been branded as the largest cross-border air-polluter in the borderlands between Russia, Finland and Norway.