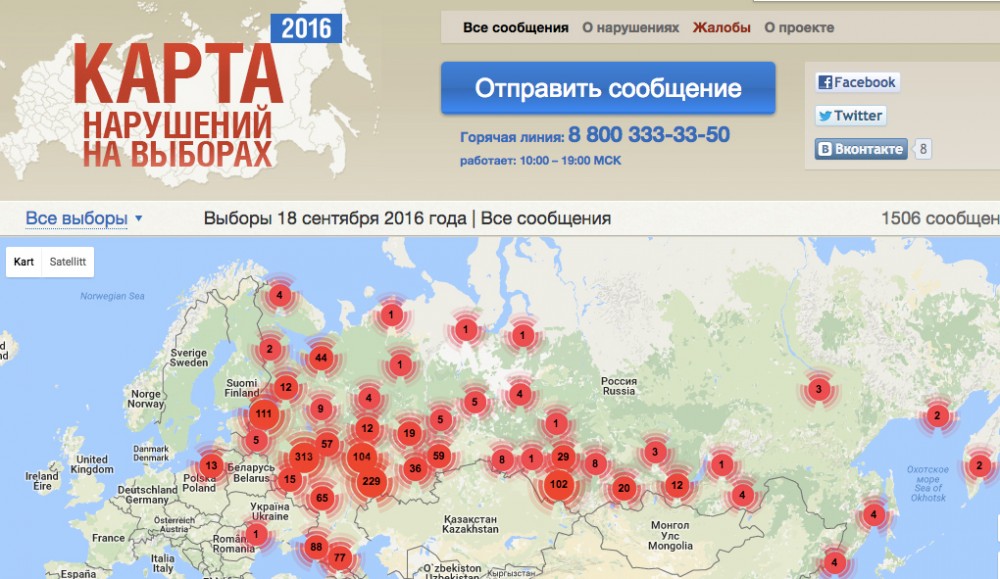 More than 1,500 cases of violations reported at the Karta Narushenii ahead of the 18th September elections. Illustration: kartanarusheniy.org

Independent election watchdog Golos continues to update its Map of Violations ahead of the September 18th State Duma elections. Arkhangelsk is among the regions with the biggest number of registered offenses.
By

The Map of Election Violations was developed in 2011 ahead of the last State Duma elections. Since then, thousands of people have filed reports about irregularities in their regions.

Ahead of this year’s elections, about 1,500 violations have been registered. That is less than ahead of the federal elections in 2011 and 2012, when respectively more than 7,000 and 5,000 complaints were filed, Golos informs.

This year, the biggest number comes from Moscow, St Petersburg, Samara and Altai. However, also other regions are high on the list. Among them is Arkhangelsk Oblast, where more than 40 violations have been registered.

The most common violations reported from Arkhangelsk are cases of misuse of administrative resources by state officials connected with political parties, and first of all ruling party United Russia. The latest case filed on the site accuses United Russia of having distributed up to hundred thousand party posters to local school kids. Other cases report about illegal party propaganda disguised as journalistic reporting in local newspapers.

The irregularities reported at the Map of Election Violations form the basis of a new report published by Golos this week. The publication concludes that the main problems in these elections are connected with the activities of state officials on both national and local level. The officials actively use their available administrative resources to promote party interests in public events and the media, Golos says.

Golos was initially established as association in 2001. It was temporary closed in 2013 following the Justice Ministry’s decision to include it in the list of Foreign Agents, but soon re-appeared as the Movement Golos that same year.

In 2012, Golos was awarded the Sakharov Prize its “outstanding efforts to promote democratic values through free and fair elections” by the Norwegian Helsinki Committee.

The Map of Violations was initially developed as a joint project of Golos and online newspaper Gazeta. It was continued as a joint initiative of Golos and Forbes in 2013. It is today mostly supported by crowd funding and has newspaper Novaya Gazeta as information partner.