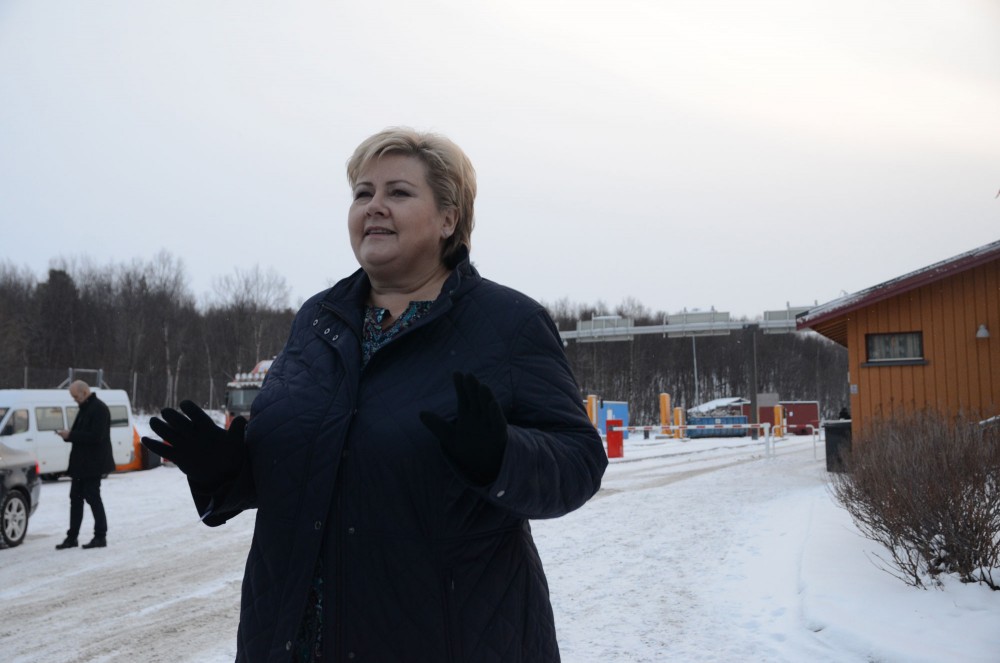 There is contact between Norway and Russia over the migrant situation, Erna Solberg confirms.

Regional cross-border cooperation with Russia continues as before despite the difficult migrant situation in the area, says PM Erna Solberg.

During today’s visit to Storskog, the Norwegian border crossing point, Prime Minister Solberg admitted that the massive influx of migrants across the Russian-Norwegian border do affect relations between the two countries.

”Much will depend on our ongoing diplomatic talks”, Solberg said to the Independent Barents Observer. ”If they agree about the return of asylum seekers to Russia, then this situation will not be a problem in our relations”, she added.

The major flow of migrants across the border is now bringing capacties on the Norwegian side to the brink. Only the last week, a total of 702 individuals applied for asylum at Storskog, figures from Norwegian police show. Over the last month, the number exceeds 2000.

Solberg did not want to specify the character of the current contact between the sides, but confirmed that there are talks on diplomatic level.

She also underlined that the well-developed cross-border relations in the area remain intact.

”This will continue as before”, the PM stressed. ”Unless of course something extraordinary happens”, she added.

Norway and Russia have over the past 25 years developed strong a cross-border relationship within the frames of the Barents Cooperation, and thousands of locals are involved in joint people-to-people activities.

Many of the migrants now crossing the border to Norway have lived a longer periods in Russia. While the majority of the asylum seekers in the beginning were Syrians, the biggest group now come from Afghanistan.

The growing number of migrants in the area has strained the capacities of both countries’ border guards and the risk of illegal border crossing beyond the Storskog border crossing point appear immanent.

Last Friday, a Chinese citizen was the first individual to be caught by Norwegian border guards when trying to make it across the border in the mountainous terrain between the countries.