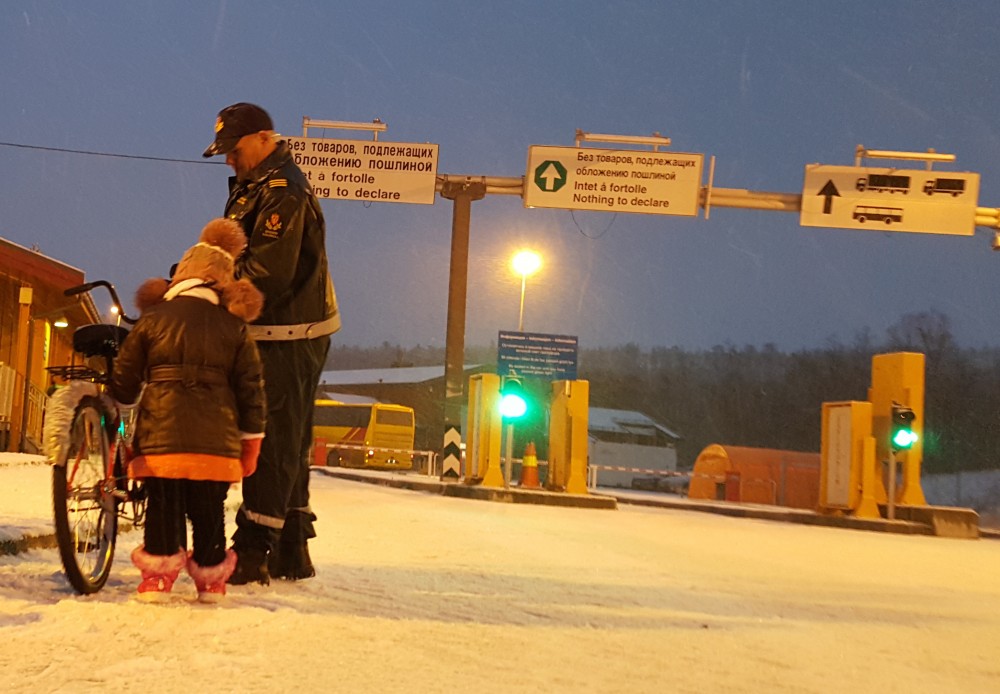 Immigration officer assists this girl with the bike she, her parents, and little brother arrived with at Storskog. Photo: Thomas Nilsen

This Afghan girl is one of more than 1,000 children that have entered Norway at Storskog on bicycle.
By

So far, 1,096 minors have arrived to Norway via the Russian Arctic Route. Of them, 41 are unaccompanied children, says press spokesman Martin Andersson with the Norwegian Directorate of Immigration.

The asylum-bikers discovered the route into Europe in the High North late this summer. Due to Russian rules, it is not allowed to walk across the borderline, forcing the asylum-seekers to buy a bicycle for the 2-300 meters distance between the checkpoint Borisoglebsk and the Norwegian Storskog checkpoint.

A blogger in Murmansk confirms the decreasing number of migrants on the Arctic Route, referring to airport police that counted 47 people on their way to Norway over the last 24 hours.

On Sunday, 59 migrants crossed the border.

It is unclear if the decline is due to the harsh winter climate as the sun this week sets under the horizon until late January, or if Norway has succeeded sending the message that the border is not an open door. Most migrants risk a fast return.

The Arctic refugees route includes a flight to Murmansk from Moscow, before taking a private taxi or minibus towards the Norwegian border. That is a three hours drive to the west.

In total 5,111 asylum-seekers have entered Norway from Russia. The majority is from Syria (1,636) and Afghanistan (1,520), but there are also hundreds from countries like Iraq, Pakistan and Egypt. Citizenship records have not been found for 334 of the asylum-seekers.

More than 30,000 asylum-seekers are now living in Norway. In comparison, Sweden expects the total number to be 140,000 by year-end.