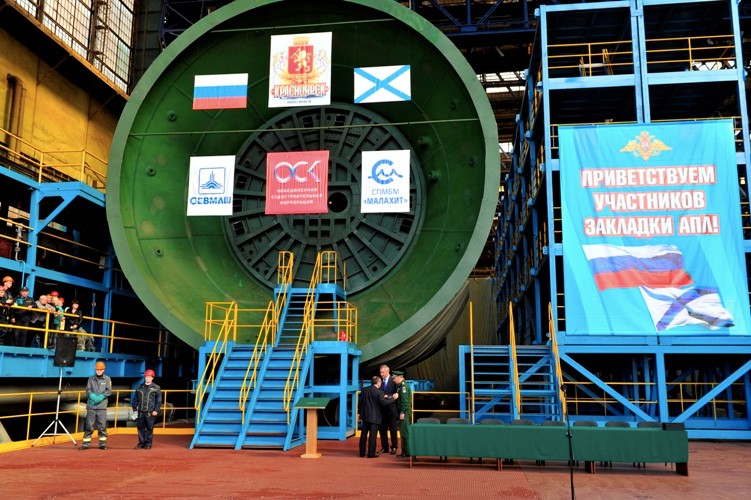 The Sevmash Yard now has a total of seven nuclear subs under construction, of them four strategic Borey-class vessels. Here from the laying of the keep of the "Knyaz Oleg" in July 2014. Photo: Sevmash.ru

The Sevmash Yard gets ready for construction of Russia’s 7th strategic Borei submarine.
By

Top representatives of the Russian Ministry of Defence, the Northern Fleet and Navy are expected to Severodvinsk, the shipbuilding center in northern Russia, as construction workers are ready to lay down the keel of another nuclear submarine.

Construction of the ”Imperator Aleksandr III” will be formally launched in a ceremony on December 18th, the Russian Navy informs in a press release. The strategic sub is a 955 Borei-A class (project 09552).

The new sub will be the seventh Russian Borei-class sub and the fourth of the subcategory Borei-A. It is to enter duty in the Northern Fleet by year 2020.

With the ”Imperator Aleksandr III” Sevmash will have a total of four strategic subs under construction. From before, the yard is in the building process of the ”Knyaz Vladimir”, the ”Knyaz Oleg” and the ”Generalissimus Suvorov”.

Since the first Borei-class sub, the ”Dmitry Dolgoryky”, entered the Navy in January 2013, Sevmash has handed over to the Navy the ”Aleksandr Nevsky” (December 2013) and ”Vladimir Monomakh” (December 2014).

Sevmash might lay down the keel also of an 8th Borey-class vessel this year. According to Wikipedia, construction of the ”Knyaz Pozharsky” will be launched in the course of December 2015.

The Borey-class subs are to replace the Delta III, Delta IV and Typhoon subs, the main subs currently in Russian Navy service. The first design work was started in mid-1980s and construction of the first Borei class vessel (the ”Dmitry Dolgoruky”) started in 1996. Russia intends to build a total of ten Borei subs.