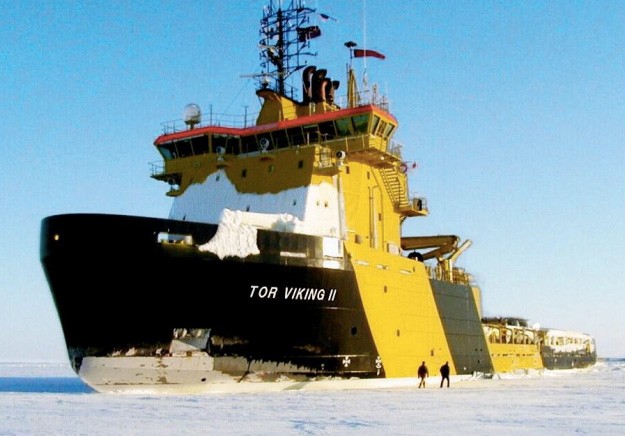 "Tor Viking" makes it into the history books on Arctic shipping. Photo: Vikingsupply.com

Never before has a ship made it through the Northern Sea Route without nuclear-powered icebreaker escort at this time of the year.
By

”At times, the ice conditions were challenging”, company representative Morten Grumheden Aggvin admits to the Independent Barents Observer. ”Last weekend, we got stuck for a few hours, but eventually managed to get loose with own help”, he adds.

The ”Tor Viking”, an icebreaker and anchor handling tug owned and operated by the Norwegian company Trans Viking, is back in Norwegian waters after having conducted a historical sailing along the Russian Arctic coast. The ship makes it into the record-books as it successfully goes transit through the Northern Sea Route without assistance from Russian nuclear-powered icebreakers in December month.

”The voyage was a success, much thanks to the fantastic efforts made by the crew”, Aggvin underlines.

The ”Tor Viking” entered the Bering Strait on 28th November and passed the northern tip of Novaya Zemlya on 10th December.

Data from the trip show that the ship encountered thin ice as soon as it crossed through the Bering Strait and thereafter close drift ice with ridges on the way to the Wrangle Island. As it approached the New Siberian Islands, visibility deteriorated and ice floes got thicker and ridges heavier.

”We have had very good support from the K-Sat, AARI, Polar View and Storm Geo, as well as our own Shore Operation Center”, Aggvin says to the Independent Barents Observer. ”We have got all necessary information about ice conditions and weather, and this made it possible for us to choose the right path through the ice”, he adds.

”This made it possible for us to conduct the voyage without support from icebreakers”.

The ”Tor Viking” is expected to arrive in Tromsø, northern Norway, early this week.

As previously reported, Russia intends to boost traffic and shipments on the NSR. A federal plan approved by government in June this year includes the increase in goods volumes on the route from today’s four million tons per year to 80 million tons by year 2030.