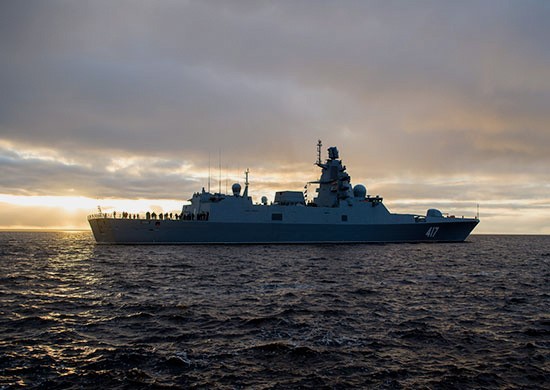 New frigate "Admiral Gorshkov" (project 22350) is the biggest Naval vessel built in Russia in almost two decades. It is expected to be included in the Northern Fleet early 2016. Photo: Mil.ru

Russian Navy gets more new vessels than ever before in post-Soviet times.
By

As Russia continues to boost its defence budgets, the country’s Navy is propped up with dozens of new ships. All of Russia’s five fleets have in the course of 2015 received a number of enforcements. And more are are to come in 2016.

Alone in the Northern Fleet, the country’s most powerful, at least four new-built vessels have been docked in Navy ports along the Kola Peninsula in 2015.

In December, the ”Akademik Kovalyov”, an armament transportation ship, was handed over to the fleet. The ship is the second of the class project 20180TB and built at the Zvezdochka yard outside Arkhangelsk. It can transport up to eight Bulava ballistic missiles.

In the same month, the fleet got the ”Igor Belousov”, a 98 meter long and 5000 deadweight rescue vessel designed to save crews from submerged, disabled submarines, as well as for supplying air, energy and life-saving equipment to submarines and surface ships. It has a landing pad for helicopters and can take on board 60 submariners for decompression, the Navy informs.

In October, the ”Yantar” moved north to its new home port of Severomorsk. The Russian Navy insists that it is a oceanographic research vessel. However, US intelligence agencies argue that it is an advanced spy-vessel capable of running sub-sea operations.

In July, another intelligence vessel made its way to the Northern Fleet. The 4000 ton deadweight ”Yuri Ivanov” is built by the Northern Yard in Sankt Petersburg and will operate in the Russian Arctic. The “Yury Ivanov” will be the Russian fleet’s largest vessel of its class. It is 95 meters long, 16 meters wide and has a crew of 120, the Navy press service informs. It is equipped with hi-tech instruments for electronic intelligence collection.

In addition, a string of other kind of vessels are on their way. The 4500 ton heavy ”Admiral Gorshkov” (project 22350) is built at the Northern Yard in St. Petersburg and will be officially handed over to the Northern Fleet early 2016, the Navy informs. It is the biggest Naval vessel built in Russia in almost two decades. Another four vessels of the kind are under construction at the Northern Yard.

New Northern Fleet icebreakers are under construction. A total of four diesel-powered icebreaking vessels will be included in the fleet, the first of which be ready in 2017. The construction of the first ship of the kind, the “Ilya Muromets”, was started in April this year. The 84 meters long, 20 meters wide vessel will be equipped with Azipod propellers and have a cruising capacity of 60 days, a Navy press release reads. It is planned to be ready by 2017.

Also more submarines are on their way. A total of four more Borey-class subs are under construction at the Sevmash yard. In December, the yard laid down the keel of the ”Imperator Aleksandr III», the country’s 7th Borey sub. In addition, Sevmash is constructing also the new Yasen-class, the latest generation multi-purpose submarines. While the first vessel of the kind, the ”Severodvinsk”, was commissioned in 2013, the second, the ”Kazan”, is expected to be ready for action in 2016. A total of four Yasen-class subs are currently under construction in Severodvinsk.

A number of ships are also under upgrade and reconstruction, among them the battle cruiser ”Admiral Nakhimov”, which is to be ready in 2018. In 2015, the nuclear subs ”Gepard” and ”Podmoskovie”, both returned to the Northern Fleet after modernization processes. On 28th December, the Sierra-class nuclear powered submarine “Pskov” returned to the Northern Fleet after four years of upgrades.

Also the Russian Coast Guard, which is subordinated to the FSB, is getting new ships. In addition to a renewed fleet of smaller, fast-going patrol boats and a new vessel of the long-time proven Svetlyak-class patrol vessel, the Coast Guard will receive at least two types of ice-going vessels designed for operations in the Arctic. The first vessel of project 22100 Okean-class ice-going patrol vessels, “Polyarnaya Zvezda” this year underwent sea trials in the Baltic Sea. Vessels of this class can break up to 80 cm thick ice. The two next vessels of this class are expected to be laid down in 2015, and should be ready for service in 2019, according to RIA Novosti.

“We didn’t have such a massive construction of coast guard vessels and boats even during Soviet times,” Commander of Russia’s Coast Guard Admiral Yury Alekseyev this year said in an interview with Rossiyskaya Gazeta.